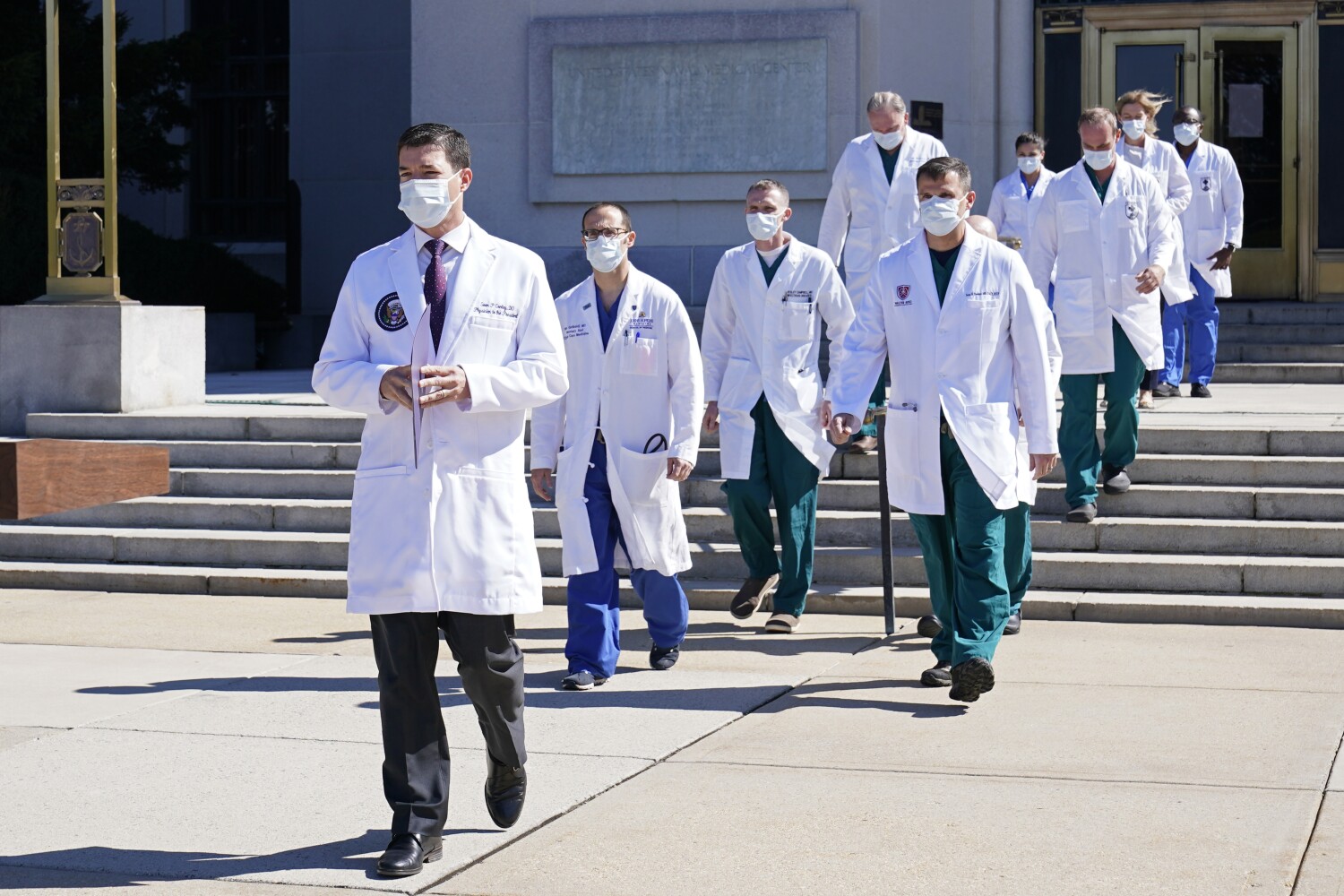 White House officials on Saturday stoked new questions about how sick President Trump has been with COVID-19 and when he became ill, with the president’s medical team suggesting he has been sick since Wednesday, rather than Friday morning when he made his announcement.

The new timeline, if accurate, would suggest that Trump held a rally and fundraiser in Minnesota on Wednesday and an intimate fundraiser in New Jersey on Thursday while knowing he was sick, potentially exposing supporters, employees and others.

The White House quickly attempted to walk back some of the doctors’ comments in a Saturday morning briefing at Walter Reed National Military Medical Center, where the president is being treated. At the same time, however, they confirmed that Trump had been considerably sicker than previously announced, enough so that he required supplemental oxygen on Friday morning after laboring to breathe.

Administration officials initially said, without attribution, that Dr. Sean Conley, the president’s physician, had misspoken when he said that Trump was 72 hours into his illness. That was followed by a memo from Conley saying Trump was diagnosed Thursday evening.

The contradictions and the administration’s long record of providing false or opaque information fueled mounting confusion about Trump’s illness and how the White House has handled it.

At the Walter Reed briefing, Conley and other doctors pronounced themselves “cautiously optimistic” about Trump’s health, with his breathing normal and his fever resolving. A few minutes later, a senior official, speaking on condition of anonymity, released a more dire assessment to White House reporters.

“The president’s vitals over the last 24 hours were very concerning and the next 48 hours will be critical in terms of his care,” the official said. “We’re still not on a clear path to a full recovery.”

White House Chief of Staff Mark Meadow later confirmed to the Associated Press that Trump went through a “very concerning” period Friday and the next 48 hours would be critical.

Conley, who briefed reporters outside Walter Reed alongside the president’s medical team, was also evasive about whether the president needed any supplemental oxygen since his apparent diagnosis, declining to say unequivocally that he had never received it.

“Right now, all indicators are that he’ll remain off of oxygen going forward,” he said.

Under questioning from reporters about whether Trump had needed oxygen over the last three days, Conley seemed to rule out every period except early Friday, before Trump was abruptly taken to Walter Reed.

A person familiar with Trump’s recent treatment said he received supplemental oxygen Friday morning after laboring to breathe, a development that raised the level of alarm among White House officials.

Several of the nine doctors and nurses who stood beside Conley outside Walter Reed were critical care pulmonologists, specialists with expertise in respiratory complications that can occur in severe COVID cases.

The White House press office did not respond to questions later Saturday about the use of oxygen.

At the briefing, Conley also declined to say what Trump’s temperature had been when he had a fever, saying only that he had been without one for 24 hours. And the White House physician wouldn’t answer a question about when Trump last had a negative coronavirus test.

Adding to the confusion, Dr. Brian Garibaldi, a Johns Hopkins pulmonologist who is working with the White House medical team, said Saturday that Trump had received a dose of an experimental antibody therapy “about 48 hours ago,” which would have been around midday Thursday.

That would mean Trump received the treatment some 12 hours before he announced his positive test and before learning that presidential advisor Hope Hicks had tested positive for the virus.

The drug, made by the pharmaceutical company Regeneron, hasn’t been approved for COVID-19 treatment but was provided under the Food and Drug Administration’s “compassionate use” program that’s typically reserved for critically ill patients who are willing to try almost anything.

Conley and his team tried to give an upbeat assessment of Trump’s current condition, with one physician saying that Trump told his doctors Saturday morning that “I feel like I could walk out of here today.”

“The team and I are extremely happy with the progress the president has made,” Conley said.

Underscoring the mounting toll the coronavirus is taking on official Washington, a third Republican senator announced a positive test Saturday morning as the nation watched anxiously for updates on Trump’s condition following his admission to Walter Reed.

Former New Jersey Gov. Chris Christie, a Republican and confidant of the president who said no one wore masks when he and others spent several days preparing Trump for his debate Tuesday, also announced Saturday that he had tested positive.

The president is expected to spend at least several days at the hospital as he undergoes treatment.

The abruptness of Trump’s departure from the White House on Friday and the fact that he was put on an experimental drug regimen have caused concern among outside physicians and specialists.

“He’s the president, and the country has a right to know. I’d like to see more information,” said Dr. Ashish Jha, dean of the Brown University School of Public Health.

“The way they’ve treated him so far, they’ve been pretty aggressive,” Jha said. “In a typical patient, you’d look at that and say, these are all really concerning signs. With him, we have to read it a little different.”

But as a 74-year-old man who is obese, Trump is at elevated risk.

“The fact that there’s any symptoms puts us in a whole new realm of concern,” said Dr. Jeremy Faust, an emergency physician at Brigham and Women’s Hospital in Boston and a public health expert.

“This sort of crosses a Rubicon,” putting Trump in a higher risk category of people who can develop more serious health issues, he said.

Wisconsin Sen. Ron Johnson became the third Republican senator to disclose a positive test when he announced it Saturday morning in a statement.

Johnson just emerged from a two-week quarantine that began Sept. 14 after being exposed to someone else who tested positive. Johnson’s office said he has no symptoms.

His diagnosis could further complicate the Republican effort to confirm Judge Amy Coney Barrett to the Supreme Court before the Nov. 3 election. Republicans hold a three-seat majority in the Senate, and two Republicans have already said they will not vote to confirm her before that. South Carolina Sen. Lindsay Graham, a Republican who chairs the Senate Judiciary Committee, said he plans to begin holding hearings on the nomination the week of Oct. 12 as previously scheduled.

Unlike other high-profile Republicans who have tested positive, Johnson did not attend an event in the Rose Garden last Saturday to announce Barrett’s nomination.

The list of top Republicans who’ve been infected is fueling a sense of panic in Washington that the virus is creating the type of outbreak in and around the president that has already enveloped other parts of the country.

While the District of Columbia had only a handful of new cases last week, the White House itself has become the city’s biggest vector.

Joe Grogan, who resigned as Trump’s top domestic policy advisor in May, tweeted that the White House complex “is the most cramped, unsanitary place of business I have ever worked.”

“It is a miracle it took this long for covid to hit it. I have been healthier since I left than I ever was when I worked there,” he added.

The list of those recently infected includes: Kellyanne Conway, a recently departed counselor to the president who attended the Saturday event; Hicks, another senior advisor who is often with Trump; Ronna McDaniel, the chairwoman of the Republican National Committee; Bill Stepien, Trump’s campaign manager; First Lady Melania Trump; Sens. Mike Lee (R-Utah) and Thom Tillis (R-N.C.), both members of the Senate Judiciary Committee; and at least three members of the White House press corps.

Trump To Withdraw Nomination Of Anti-Environmentalist As Public Lands Director