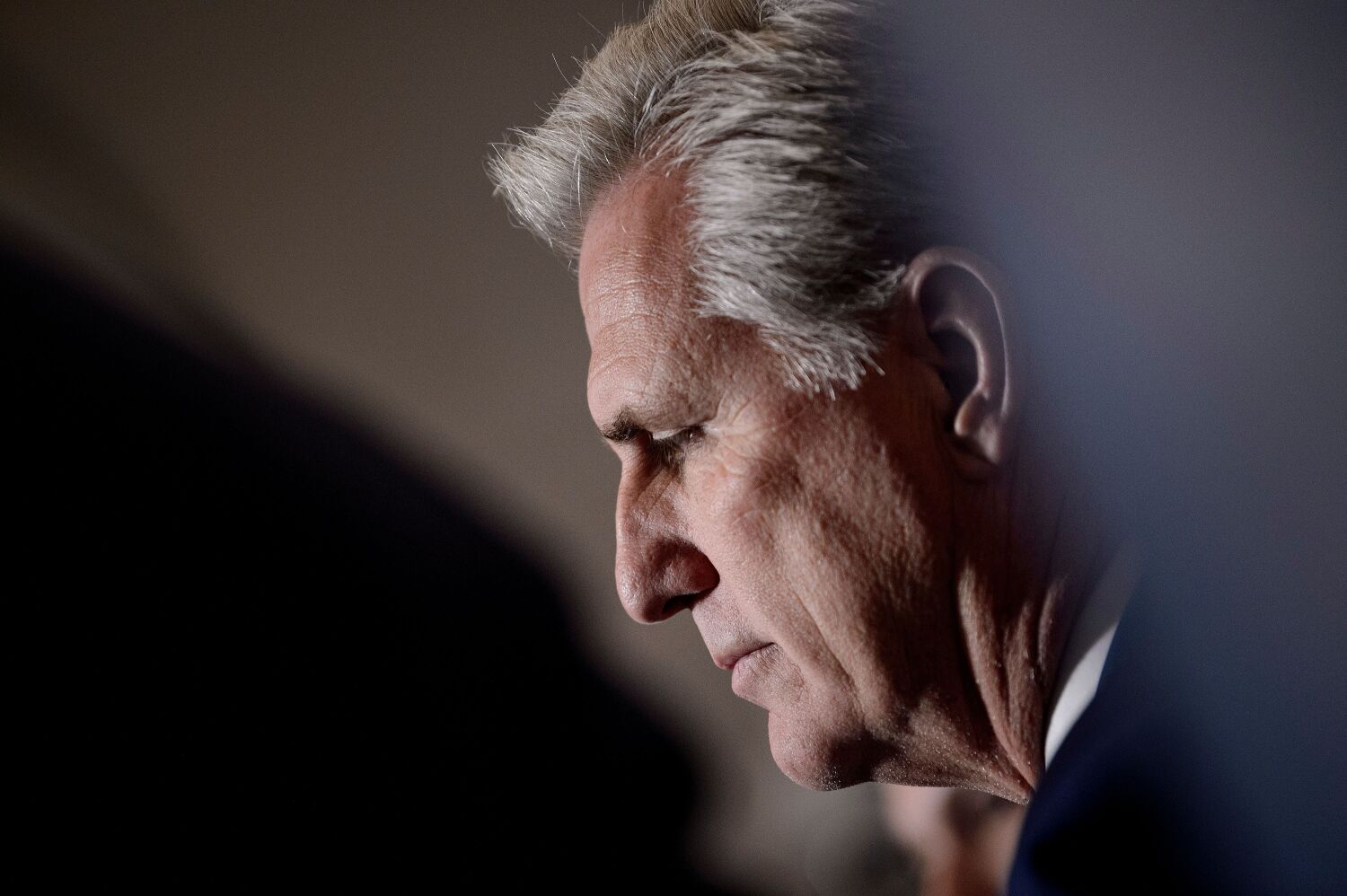 Facebook — corporate motto: Putting profits first — also saw fit to briefly banish the Georgia congresswoman, an exile that lasted all of 24 hours. By Tuesday, Greene was once more free to offer constituent services and promulgate perfectly reasonable theories like the one about California’s 2018 wildfires being started by Jewish-controlled space lasers.

In the year since taking office, Greene has proved to be nothing more than a political distraction, and an odious one at that. But the way GOP House leader Kevin McCarthy responded to her sanctioning by social media — and the fact he chose to weigh in — was telling.

“The American experiment is dependent on the freedom and ability of Americans to express themselves, which Republicans are fighting to preserve,” the Republican from Bakersfield said in a statement.

The American experiment is also dependent on recognizing the will of voters as expressed in free and fairly conducted elections, which is something McCarthy and 146 of his Republicans colleagues refused to do on Jan. 6, 2021. But that’s another column.

McCarthy further threatened to exact revenge. If Republicans take control of Congress in November’s midterm election, he said, they would respond by “shutting down the business model you rely on today.”

“Twitter (all big tech), if you shut down constitutionally protected speech (not lewd and obscene) you should lose 230 protection,” McCarthy tweeted, referring to the provision in the 1996 federal Communications Decency Act that allows companies to publish user-posted materials without being held liable.

Earlier, McCarthy had warned telecommunications and social media companies against cooperating with congressional investigators probing the Jan. 6 attack on the Capitol, saying Republicans “will not forget” their actions. (Nice little money-minting industry you got there. Be a shame if anything happened to it.)

There are many good reasons for a long-overdue clampdown on monopolistic disinformation superspreaders like Facebook and other social media. But thwarting an investigation into the attempted violent overthrow of the government and restoring Greene’s personal Twitter account are not two of them.

It’s not as though Greene has been silenced. Her official congressional account remains fully functional, serving as a reliable source of misplaced pity and compassion for the jailed insurrectionists who tried to overturn the 2020 election.

“Twitter simply kicking someone off is not a 1st Amendment violation,” said Eugene Volokh, a UCLA expert on constitutional law. Government entities, not private companies, are bound by the guarantee of free expression.

Greene’s quasi-termination for repeatedly violating Twitter’s terms of service was, however, grist for an inevitable fundraising appeal. (“Rush an emergency contribution of $1.00 right away,” she pleaded.) Having lost her committee assignments for, among other things, advocating violence against Democrats, Greene apparently has little to do with her time besides fleecing the gullible and outrage-prone.

Way back in 2019, McCarthy was among those Republicans who supported removing GOP Rep. Steve King from his committee assignments after the Iowa congressman defended the notion of white supremacy in a New York Times interview. (It was just the latest in a history of bigoted remarks from King.)

Fast-forward to last November. When Rep. Paul Gosar (R-Ariz.) was sanctioned and stripped of his committee assignments for tweeting a video that depicted him killing Rep. Alexandria Ocasio-Cortez (D-N.Y.) and swinging swords at President Biden, McCarthy adopted a much different stance. He told reporters that Gosar and Greene might even get better committee assignments if the GOP reclaims control of the House in November.

That’s quite the incentive structure: Behave badly and reap the benefit.

However, that turnabout is nothing compared with McCarthy’s head-snapping response to the violent and traitorous events of Jan. 6.

He initially held Donald Trump to account, flatly stating, “The president bears responsibility for Wednesday’s attack on Congress by mob rioters.” That changed when the anticipated anti-Trump backlash failed to materialize among rank-and-file Republican voters. Soon McCarthy was on a flight to Palm Beach, Fla., to grovel and beg forgiveness.

For McCarthy, it all comes down to Trump, his worshipers like Greene and Gosar, and a belief that voters in the former president’s thrall are indispensable to a robust GOP turnout this fall and McCarthy’s long-nurtured dream of claiming the House speakership.

Holding out Greene as some kind of free-speech martyr because her personal Twitter account was shuttered is as fanciful and absurd as one of those pyrotechnic Jewish lasers. It’s also a great deal more cynical.

But, sadly, it’s not surprising. As McCarthy grasps for the height of congressional power, the only question is how low he is willing to go.

Apparently, he knows no bottom.

On a day when California became the state with the most coronavirus infections in the U.S., Gov. Gavin Newsom said Wednesday that officials are redoubling efforts to secure protective gear and are preparing to expand […]