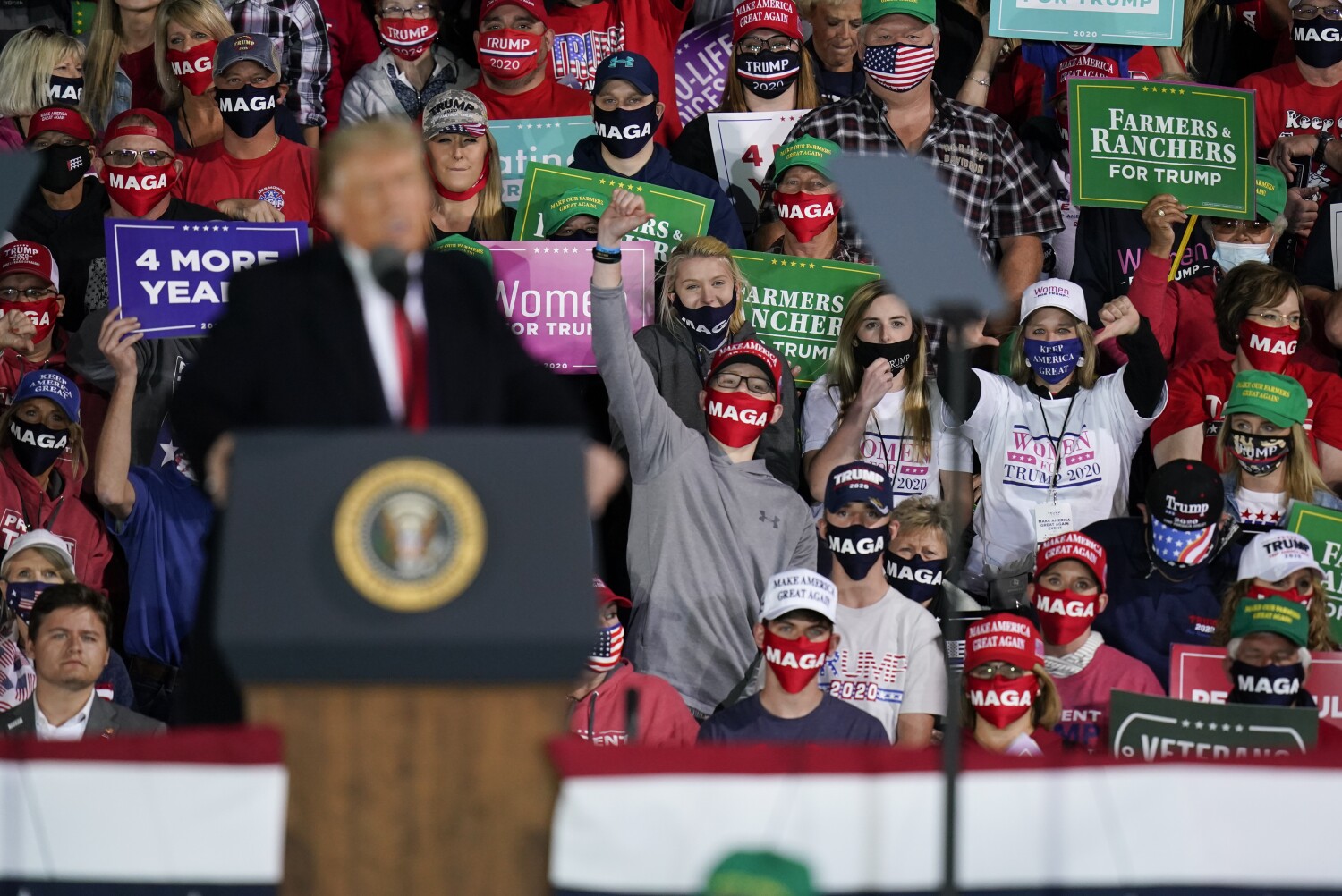 Sinking in the polls, strapped for cash and facing a potential tidal wave of early Democratic voting as coronavirus cases have soared, President Trump has found new culprits to blame for his political woes — his own supporters, Cabinet members and even fellow Republican leaders.

In appearances this week, he has vented his frustrations with suburban women — a critical voting bloc that polls suggest he has lost to Democratic nominee Joe Biden — mixing an uncharacteristic personal plea with raw resentment and a curious claim of achievement.

“Suburban women, will you please like me? I saved your damn neighborhood, OK?” he said at a rally in Johnstown, Pa.

In Des Moines, he jabbed at Iowa farmers, who were battered by his trade war with China, saying they apparently prefer government handouts to “working their asses off.”

At a town hall in Miami, he refused to disavow a far-right conspiracy-mongering group that falsely alleges a cabal of Satan-worshiping pedophiles is trying to take over the government. He also falsely claimed that the nation is “turning the corner” on the COVID-19 pandemic on a day when new infections and hospitalizations rose to their highest levels since April.

And on Friday, in a pitch to older voters at an indoor event in Fort Myers, Fla., Trump reiterated his ageist attacks on Biden, saying the 77-year-old former vice president is “gone,” and warned Health and Human Services Secretary Alex Azar, seated nearby, that any delay in developing a COVID-19 vaccine would be his fault.

“We’re counting on you,” he told Azar, then turned to the audience and said, “I’m going to blame him if this stuff doesn’t happen fast.”

Trump also attacked a Republican senator who is in a difficult reelection fight and whose seat could determine whether the party continues to control the Senate next year.

Sen. Susan Collins of Maine was “not worth the work,” he tweeted, citing a “nasty rumor out there” that she would not vote to confirm conservative jurist Amy Coney Barrett to the Supreme Court. A Senate Judiciary Committee vote has been scheduled for Thursday.

It wasn’t a rumor. Collins has said publicly that she would not vote to confirm a nominee this close to an election. Moreover, Republicans are desperate to hold her seat in the Senate, but with a 53-47 majority, they do not need her vote to confirm Barrett to the high court.

Collins was the deciding vote for Brett M. Kavanaugh, another of Trump’s Supreme Court nominees, in 2018. The decision contributed to an erosion of support for Collins, particularly among women, in Maine.

Long before he was president, Trump was known for lashing out at close aides and business associates and even his own children, blaming and denigrating others while refusing to admit his own failings or faults.

Now with 18 days until election day, and more than 20 million ballots already cast in record early voting, Trump’s anger and frustration is spilling into the open in ways unusual even for him.

“Trump is completely unhinged at the moment, knowing deep down that he is going to lose this election and possibly by a landslide,” said Michael Cohen, Trump’s former longtime lawyer and confidant, who became a fierce critic after he was convicted of lying to the Senate about Trump’s business interests in Russia.

“Trump cares for no one or anything other than himself,” Cohen said. “His supporters are only valuable to him if they vote for him at the polls.”

Four years after Trump leveraged Hillary Clinton’s description of his base as “deplorables” and successfully fused his own grievances with theirs, his final pitch to voters this time is far less clear, dwelling more on his own frustrations and fears than the electorate’s.

“The dynamic is so much different than 2016, which was sort of a fanciful quest for the presidency,” said Michael D’Antonio, a Trump biographer. “Now he just has so much more to lose. He faces the prospect of not only shame and humiliation but also prosecution, and I think that’s terrifying to him in a way that nothing has been before.”

Trump has struggled to articulate a second-term agenda, and polls show he has failed to convince Americans that he has shown leadership or proved trustworthy during a pandemic that has killed more than 218,000 Americans this year.

Barbara Res, a longtime Trump Organization executive who has just written a book about her 18 years working for him, said the only thing new about Trump’s long-held contempt for working-class people is that it’s spilling into public view.

“His world is personal drivers, exclusive clubs, private planes, and parties. But without the MAGA hat-wearing white male, he has no political career,” Res writes in “Tower of Lies.” “So he created this charade. Friend to the common man? Give me a break. Trump can’t stand the common man.”

Sen. Ben Sasse (R-Neb.) let loose his deep frustration with Trump in a private phone call with donors this week that his office has since confirmed. Speaking of a key pillar in Trump’s conservative base, Sasse said the president “mocks evangelicals behind closed doors.”

During Trump’s rally Tuesday in Iowa, a state that months ago looked like a slam dunk for the president but is now a neck-and-neck race with Biden, Trump expressed his nervousness about the state of play, urging his supporters to “get the hell out to vote” and saying he would never return if he loses.

“I may never have to come back here again if I don’t get Iowa,” he said. “I’ll never be back.”

He also suggested that Iowa farmers, who have been unable to sell their products overseas because of his tit-for-tat trade war with China, were happy to rely on the bailouts his administration has authorized and were secretly relieved not to work as hard.

“I shouldn’t tell you this because they don’t like this, but some of the farmers were making more money the way that Iowa was doing than by working their asses off, all right?” Trump said. “They were very, very happy.”

He also complained that TV news coverage paid more attention to the derecho storms that destroyed hundreds of thousands of acres of crops in Iowa in August than to his nomination for a Nobel prize that he didn’t win.

For Trump’s strongest supporters, his blunt statements show his rough-hewn outsider’s persona and allow them the sense of a shared joke at the expense of elites, the media and other foils.

But Trump’s travel schedule — he won Iowa by more than 9 percentage points in 2016, for example — shows how the joke has grown old with others. Polls show a majority in Iowa disapprove of his handling of the pandemic.

On Friday night, he campaigned in Georgia, a state he won by more than 5 points in 2016 and that has not voted for a Democrat for president since 1992. Recent polls there have shown Biden ahead.

Trump “has always been a transactional figure,” said Amanda Carpenter, a former aide to Sen. Ted Cruz (R-Texas) and a sharp critic of the president. “He’s going through the various demographics he’s doing poorly with and saying, ‘I gave you this; now you owe me a vote.’

“He expects: ‘I was loyal to you, now you be loyal to me,’” she added. “But people’s lives have been crushed.”

Column: Biden says voters’ choice based on plans for economy