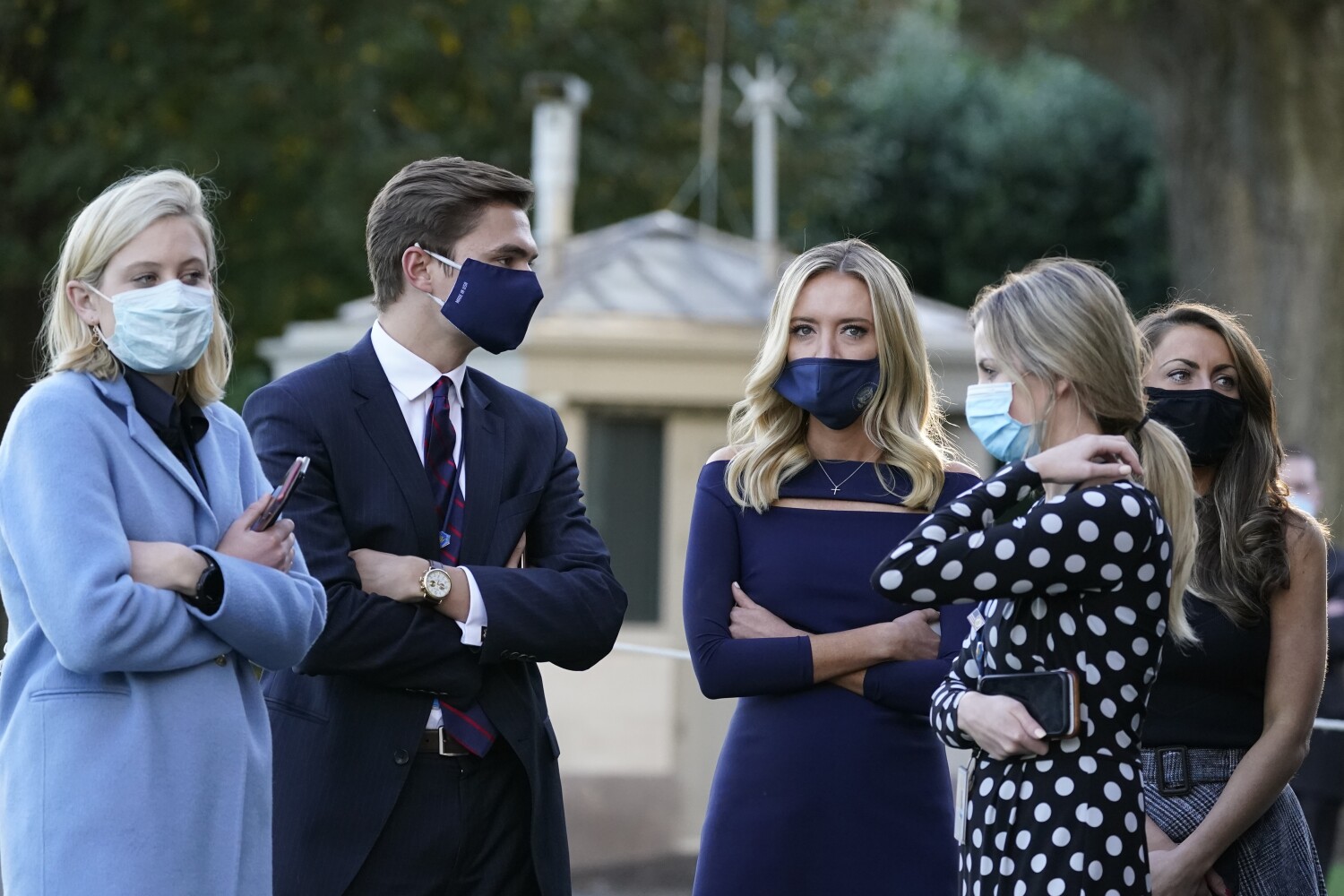 President Trump was discharged from Walter Reed National Military Medical Center on Monday night, three days after he was hospitalized for COVID-19 and hours after his doctors warned that they won’t know for a week whether he has fully recovered.

Despite receiving experimental drugs and experiencing setbacks over the weekend that suggested medical complications, Trump insisted he was feeling “better than I did 20 years ago,” even as his doctor warned that the president “may not entirely be out of the woods yet.”

Wearing a mask and his usual blue suit, Trump walked briskly out the brass-colored front door, raised his fist and then climbed into an armored SUV at 6:40 p.m., almost three days exactly after he was helicoptered to the military hospital in Bethesda, Md. The televised departure was timed to the evening newscasts, generating the type of wall-to-wall coverage Trump craves, even in ill health.

The mixed messaging reflected days of confusion and misleading statements from the White House, which has become a center of contagion for the disease. In addition to the president and First Lady Melania Trump, at least a dozen Trump aides, campaign officials, Republican lawmakers and recent contacts have tested positive for the coronavirus since last week.

In a tweet earlier Monday, Trump again downplayed the severity of the pandemic that has killed more than 210,000 Americans and infected 7.4 million others — including more than 100,000 since he went into the hospital Friday.

“Don’t be afraid of Covid,” he tweeted. “Don’t let it dominate your life.”

The advice rang alarms among health professionals, who pointed out that the disease remains deadly and is spiking in numerous states. For now, they said, Trump remains contagious and should isolate himself at the White House for 10 days to avoid infecting others.

Trump’s physician, Dr. Sean Conley, told reporters that the president has “met or exceeded all standard hospital discharge criteria,” even as he cautioned that Trump could face a relapse in coming days.

“If we can get through [next] Monday … then we will all take that deep sigh of relief,” he said.

Conley acknowledged that Trump’s response is unusual because, as president, he was given experimental drugs that are unavailable to the general public and was treated at the nation’s foremost military hospital. Few other Americans have access to that kind of care.

“We’re in a bit of uncharted territory when it comes to a patient that received the therapies he has so early in the course,” he added.

Experts warned that Trump’s attempts to portray the disease as not being a danger are irresponsible, given the pandemic’s deadly toll.

“It’s a hell of a message to send, when everywhere you look around the world, indicators are showing that as we get into the fall we’re seeing more cases, just like scientists expected,” said Ralph Catalano, a professor of public health at UC Berkeley. “And to encourage people to put themselves at risk right now seems reckless and inhumane. How irresponsible can a president actually be?”

Chris Beyrer, an epidemiologist at the Johns Hopkins Bloomberg School of Public Health, said Trump has been lucky, receiving experimental drugs and the world’s best healthcare.

“So his message about ‘don’t be afraid of COVID’ rings quite false,” he said. “Over 200,000 American dead suggest we all should remain highly concerned about COVID. Not all have been so fortunate or so well cared for.”

Conley said it has been 72 hours since Trump, who has been on several drugs, last had a fever and that his breathing has normalized.

He also said Trump would take his fourth course of remdesevir at the hospital prior to leaving, and that a fifth course will be administered at the White House.

Conley said the president’s medical team was confident they can adequately monitor and care for Trump at the White House, which has a team of doctors on 24-hour call and a sophisticated medical unit.

Conley, who admitted Sunday that his initial comments about Trump’s condition had been misleading, refused to say Monday when the president had last tested negative for coronavirus and whether he had pneumonia, or to provide any details about his lung scans.

That makes it difficult to pinpoint when Trump contracted the disease, how far along he is in his recovery or the potential for further decline.

Trump has also received an unusual combination of therapies unavailable to typical patients — some unproved or carrying potential risks — including the Regeneron antibody cocktail and the steroid dexamethasone.

“All these little things tell me it’s not smooth sailing, but for the moment they feel they can track this in the White House,” said Dr. Jeremy Faust, an emergency room physician and public health specialist at Brigham and Women’s Hospital in Boston.

The Centers for Disease Control and Prevention recommends that patients with mild to moderate symptoms self-isolate for at least 10 days, a regimen that Trump, who is famously impatient and social, may have trouble abiding.

Trump’s dismissive behavior toward the virus has helped accelerate its spread among his staff, family and others in his circle.

In a statement on Twitter, McEnany said she “tested positive for COVID-19″ but was “experiencing no symptoms.” She said she would begin to quarantine and work from home.

McEnany said that on Thursday, when she held a press briefing without wearing a mask, she “definitively had no knowledge” that senior Trump aide Hope Hicks had tested positive for the coronavirus. The decision had come under scrutiny for potentially exposing reporters and others present at the briefing.

Meanwhile, the Democratic presidential nominee, former Vice President Joe Biden, traveled to Miami on Monday for campaign events. He said he would proceed with his second debate with Trump, scheduled for Oct. 15, if medical experts give the OK.

“If the scientists say that it’s safe, the distances are safe, then I think that’s fine,” he said.

Biden and Trump have disagreed sharply for months over the president’s response to the pandemic. Trump has mocked Biden relentlessly for wearing a mask, while Biden has repeatedly warned that the president was being reckless by refusing to do so.

“Since the president was in the hospital — since Friday — more than 100,000 more people have been diagnosed with COVID. And this week, at least 5,000 more will die,” Biden said in a speech in Miami’s Little Havana. “I hope the president’s recovery is swift and successful, but the nation’s COVID crisis is far, far from over.”

On Monday, as Trump appeared to drop further in polls, some Republicans expressed concern with Trump’s management of the crisis.

Sen. John Cornyn, a Texas Republican and close ally of Trump who is seeking reelection, told the Houston Chronicle’s editorial board that Trump “let his guard down” in his desire “to demonstrate that we are somehow coming out of this and the danger is not still with us.”

Though the disease has taken Trump off the campaign trail for the final stretch of the race, his advisors say they are continuing at least some activities without interruption.

Tim Murtaugh, who heads campaign communications, said in an email that Bill Stepien, the campaign manager, remains in charge despite a COVID-19 diagnosis.

“His symptoms are mild, and he is heavily engaged, as always, while working remotely,” Murtaugh wrote.

Ronna McDaniel, chairwoman of the Republican National Committee, has also tested positive, and Brad Parscale, the former campaign manager who had been in charge of digital operations, left the campaign after a recent psychiatric episode.

Murtaugh also said there would be no change in the campaign’s door-knocking operations, despite the risk of further disease spread.

At least three Republican senators have tested positive for the virus, while others are in quarantine.

Senate Minority Leader Charles E. Schumer (D-N.Y.) again criticized Republican leaders’ plans to move forward with hearings next week for Supreme Court nominee Amy Coney Barrett. In a statement, he demanded mandatory testing and said that “every Senator and relevant staff must have negative tests on two consecutive days and have completed the appropriate quarantining period” during the hearings.

The Senate provides access to testing, but it is not mandatory under current rules.

Staff writers Jennifer Haberkorn and Evan Halper, in Washington, and Seema Mehta, in Los Angeles, contributed to this report.

Disband the police? Camden already did that

Ask the Captain: What should I wear on a plane to protect myself from COVID-19?