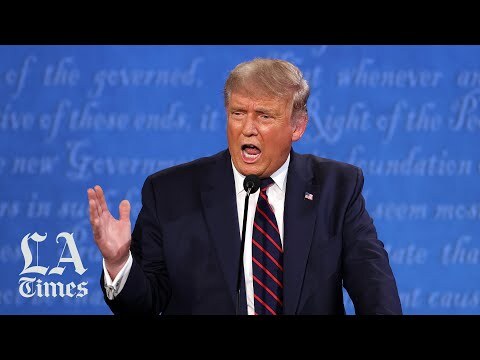 Given the opportunity during Tuesday’s presidential debate to tell white supremacists to “stand down,” President Trump instead called on a far-right hate group, the Proud Boys, to “stand back and stand by!” He added, “Somebody’s got to do something about antifa and the left.”

The president’s failure to condemn racists — and his implication that he would pit one group of extremists against another in the nation’s intensifying culture wars — drew immediate condemnation from his Democratic opponents and a wide range of commentators.

“I heard what we all heard: The president of the United States, in the year of our Lord 2020, refuses to condemn white supremacists,” Democratic vice presidential nominee Kamala Harris said on CNN.

Also criticizing Trump for trying to stop teachers from discussing critical race theory in schools, Harris added: “People talk about ‘is he dog whistling’ [on racial issues]? Dog whistling through a bullhorn.”

Jonathan Greenblatt, CEO of the Anti-Defamation League, called Trump’s lack of critical words for white supremacists “astonishing,” adding on Twitter: “Trying to determine if this was an answer or an admission. @POTUS owes America an apology or an explanation. Now.”

Shannon Watts, a California gun control activist, said via Twitter that Trump’s comment confirmed he is “a white supremacist whose strategy is to foment violence among Americans.”

Television personality Billy Eichner also tweeted that the president’s words were “one of the most disgusting, dangerous things that could have possibly been said.” Eichner’s expletive laced rebuke ended with a call to vote Trump out of office.

The question that elicited Trump’s response about the Proud Boys came during a portion of the debate on the racial disquiet that has been sweeping America since the killing in May of George Floyd at the hands of police in Minneapolis. Moderator Chris Wallace, of Fox News, noted that Trump had repeatedly criticized former Vice President Joe Biden for failing to condemn left-wing extremist groups like those associated with the antifa movement.

Wallace asked Trump: “Are you willing tonight to condemn white supremacists and militia groups and to say that they need to stand down and not add to the violence in a number of these cities?”

Trump suggested he needed to be given a name of a group to condemn. Biden, joining Wallace in demanding an answer, suggested “Proud Boys.”

To which Trump responded with his remark that the group should “stand back and stand by!”

The president’s words appeared to give comfort to members of the reviled organization.

“Standing by sir,” Enrique Tarrio, the Proud Boys chairman, wrote on a social media site popular with the far right.

“Trump basically said to go f— them up! This makes me so happy,” another prominent Proud Boy wrote on the same site.

The sort of violent confrontation that Trump seemed to welcome has been playing out on the streets of some American cities, including Portland, Ore., where over the weekend hundreds, instead of an anticipated thousands of right-wing activists, turned out in support of the Proud Boys. The organization is part of a constellation of right- and left-wing extremist factions that have taken advantage of peaceful protests against racial injustice to further their aims.

The Proud Boys, which the Southern Poverty Law Center has designated a hate organization, has sent its followers to Portland in recent years, where they have clashed repeatedly with masked, black-garbed antifa activists.

Early this month, Proud Boys members, who refer to themselves as “Western chauvinists,” accompanied a caravan of Trump supporters driving from Portland to Oregon’s capital of Salem. Members of the group said they were providing security to protect Trump supporters from violent leftists.

A clash broke out between the far-left and far-right groups, but no injuries were reported.

Jo Ann Hardesty, who last year became the first Black woman to serve on Portland’s City Council, blamed the right-wing extremists for much of her city’s unrest.

“We allow white nationalists and white supremacists to infiltrate our peaceful protests … and then create the kind of chaos and damage in our community,” she said in a video recording in June. “We must make that stop.”