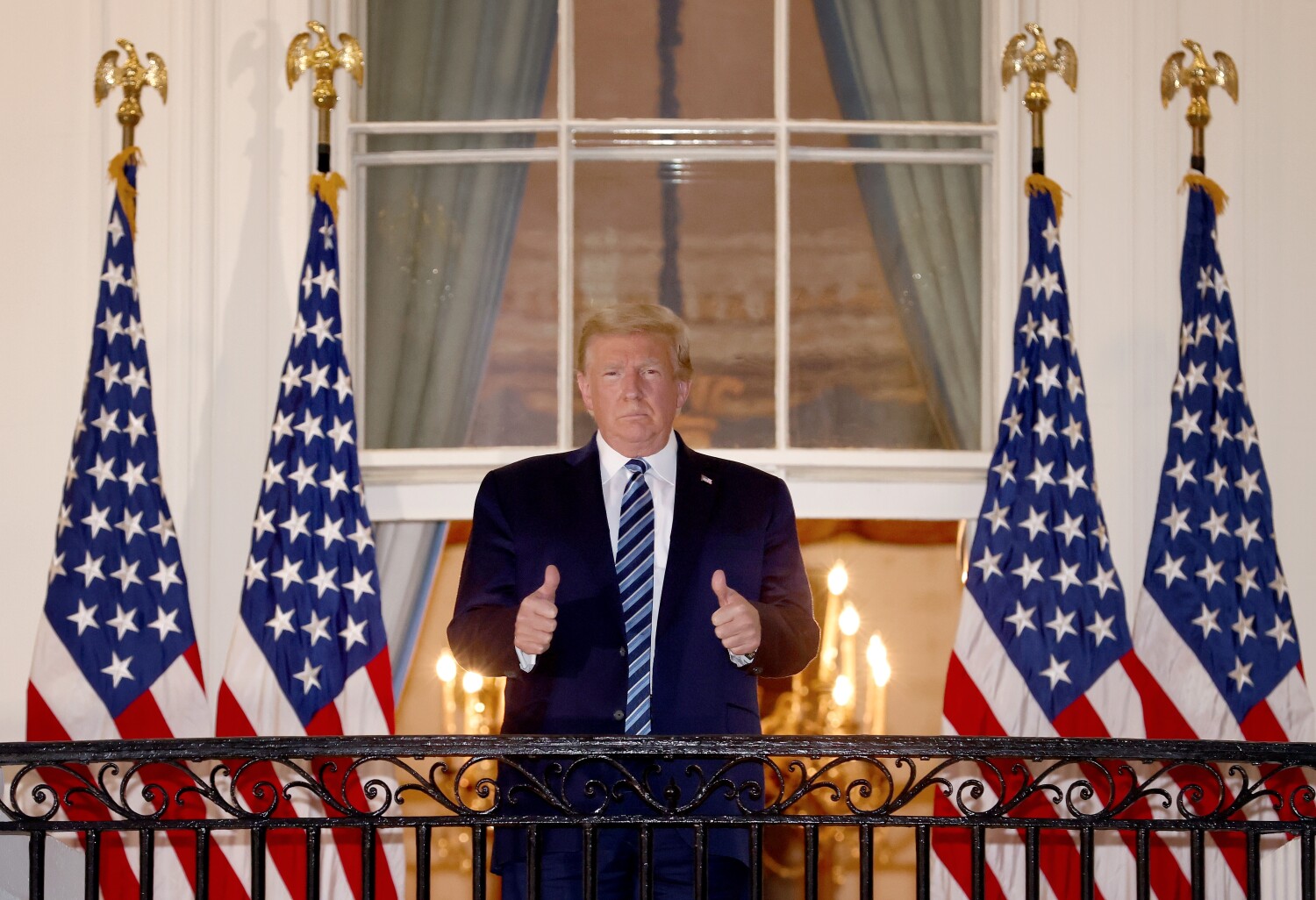 President Trump claimed he was “FEELING GREAT” in a tweet on Tuesday, his first full day back at the White House after three nights in a hospital for COVID-19, and the president’s doctor said the president showed “no symptoms” of the disease.

Still contagious, Trump is unable to hold rallies or attend fundraisers, and his cash-strapped campaign is cutting back on television ads and polling as his race against former Vice President Joe Biden moves into the final stretch.

Some advisors believed Trump had an opportunity to turn his personal health scare into a political winner — to show a softer, more personal side, a greater understanding of the virus and more empathy for Americans who have contracted the disease or seen their lives upended by it.

Instead, the president reverted to the dismissive stance he adopted early in the pandemic, belittling the coronavirus as “less lethal” than the flu and offering his own survival as proof, effectively minimizing the more than 210,000 Americans dead from COVID-19.

“Don’t be afraid of it,” Trump said in a video posted Monday night from the White House, which has become a hot zone for the contagion. “Don’t let it dominate. Don’t let it take over your lives.”

“I just can’t imagine how Trump could be doing more to hurt himself than he is right now,” said Rory Cooper, a Republican operative who worked in the George W. Bush administration and as an aide to then-House Majority Leader Eric Cantor.

Trump dismissed the coronavirus danger even as the top U.S. general, Joint Chiefs of Staff Chairman Gen. Mark A. Milley, and several members of the Pentagon’s senior leadership went into quarantine Tuesday after Adm. Charles W. Ray, the vice commandant of the Coast Guard, tested positive for the coronavirus. Senior policy advisor and speechwriter Stephen Miller also tested positive Tuesday, one of three new cases reported in the West Wing.

Trump then stepped into another political trap, tweeting that he was abandoning talks with congressional Democrats about crafting a deal to provide additional stimulus funds — accepting responsibility for walking away and ensuring that Americans, who support additional economic relief by a 3-to-1 margin, won’t get any before the election. The stock market plummeted in response.

Restless after his isolation in the hospital and White House residence, Trump is eager to return to the Oval Office and the campaign trail, according to aides. But with campaign manager Bill Stepien quarantined since a positive coronavirus test, the reelection operation is relying on surrogates, including the president’s adult children and Vice President Mike Pence.

The president wants to deliver a formal address to the country and tweeted that he is “looking forward” to his second debate with Biden, scheduled for Oct. 15, even though his doctors said he is not yet fully recovered.

Polls show Trump’s management of the crisis to be his greatest vulnerability in the election. And because polls give Biden a 2-to-1 edge over Trump in terms of which the public trusts to handle the pandemic, the president’s determination to project his own vitality, not compassion, appears politically self-defeating.

In Pennsylvania, which Trump won in 2016, Biden now leads Trump by a 54%-42% margin, a five-point swing from last month, according to a Monmouth survey. The president also trails Biden by a 48%-39% margin in Michigan, which Trump also won last time, according to a Detroit News poll.

A USA Today poll showed Trump and Biden tied at 45% in Florida, a critical state for Trump, however.

But multiple surveys taken over the weekend, as Trump convalesced at Walter Reed, showed a solid majority of Americans held the president responsible for his illness, blaming his cavalier attitude toward wearing masks and meeting groups indoors.

In a CNN survey released Monday, 60% said they disapproved of his overall handling of the pandemic, a new high on that question. And Biden extended his national lead with likely voters over Trump to a 57%-41% margin, according to another CNN poll Tuesday.

“They have four weeks to redefine or reset the narrative and they’ve got to decide: Do they reset the narrative on the virus or just change the subject to public safety or the economy,” said Pat McCrory, the former Republican governor of North Carolina, another swing state where polls show a tight race.

McCrory, now a radio host, noted that the vast majority of people diagnosed with the virus have survived. But he acknowledged it’s a losing message politically, given the 210,000 American dead.

“They’ve lost the narrative on statistics,” he said. “They’ve lost that from the very beginning, [when critics pointed out that] ‘More people died of COVID than the Vietnam war.’” About 58,000 Americans died in that 11-year conflict.

After his surprising 2016 win over Hillary Clinton, Trump was credited with having a better grasp of the electorate than his opponent. But as the incumbent, he has struggled this year, unable to make a positive case for a second term while the country is gripped by a pandemic and a recession.

“We tend to overlook how much the 2016 campaign was really about Hillary Clinton and not about Donald Trump,” said Alex Conant, a GOP consultant in Washington. “The closing weeks of the 2016 election were very much focused on Clinton’s scandals, and it was probably the most disciplined time of Trump’s political career.

“I don’t want to underestimate his political potential,” he continued. “But he hasn’t won anything in nearly four years.”

Although Trump has relied on similar scare tactics this time, warning that a Biden administration would impose socialist policies and defund police, the angry rhetoric mostly hasn’t stuck.

As usual when an incumbent runs, the election becomes a referendum on his or her record — which in this case means Trump’s handling of the worst public health crisis in a century. His relentless self-focus, making everything about him, has worsened the challenge.

Ben Shapiro, a conservative radio host and staunch Trump defender, vented frustration with the president’s political approach, tweeting that a Trump loss to Biden would be “on him.”

“The campaign against Biden isn’t difficult,” Shapiro wrote. “It just requires Trump to take himself out of the spotlight and put Biden in it. And Trump refuses to do it.”

Sarah Longwell, the founder of Republican Voters Against Trump, has conducted dozens of focus groups with college-educated women who voted for Trump in 2016 and are now moving away. They pay more attention to political news than before, especially regarding the pandemic, which has direct impact on their families, she said.

“He’s downplayed it while their lives have been upended by it,” Longwell said. “The fact that he contracted the virus and had to be hospitalized and continues to say ‘Hey, everything’s fine,’ they see through the straw man act.”

On Capitol Hill, several Republicans have adopted Trump’s messaging. Sen. John Kennedy (R-La.), whose state has the fifth-highest per capita death toll, said Monday that COVID-19 is “not nearly as lethal as the experts told us it would be.”

But parroting Trump’s talking points, which resonate with the president’s base, may alienate the swing voters and ultimately cost the GOP its Senate majority.

Sen. John Cornyn, (R-Texas), who is running for reelection, seemed to recognize as much in an interview this week, lightly criticizing Trump, who he said “got out over his skis” in wanting to convince the public the worst of the pandemic was over.

“What he needs to do is focus on is his record,” said Phil Berger, a Republican who leads the majority in the North Carolina Senate. “I think his campaign needs to focus on their ground game and I think it would be helpful if his debate performance … was more clearly focused on his record and focused on what he has done.”

But like other Republicans, Berger is not holding his breath for a messaging reboot. Trump, he said, “is a package and the things that people really like about him don’t come without the things that tend to be frustrating to folks.”

U.S. Gulf Coast prepares for second hurricane in a month