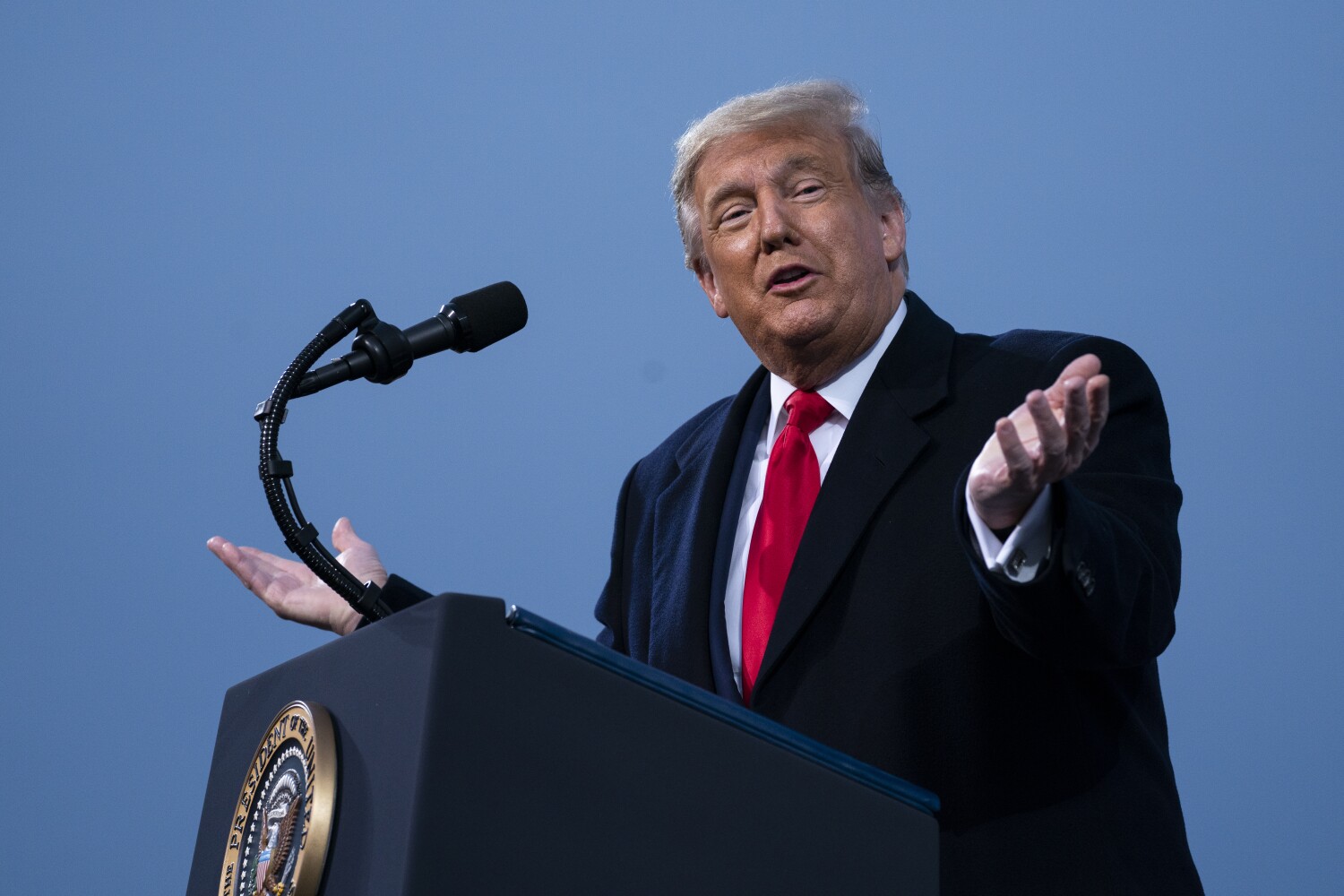 The push for quick action on a successor for the late Supreme Court Justice Ruth Bader Ginsburg gathered steam Saturday, as President Trump said that he expected to announce his choice this week and that it would be a woman.

Early Saturday, Trump on Twitter called on the Senate to act “without delay.”

“We want to respect the process. I think it’s going to go very quickly, actually,” he said to reporters just one day after the 87-year-old justice died from complications of pancreatic cancer. “I think we’ll have a very popular choice, whoever that may be.”

Trump said he had a “short list” of contenders. He did not name names, but a leading candidate to replace Ginsburg is U.S. Circuit Judge Amy Coney Barrett, a former law clerk for the late Justice Antonin Scalia and a longtime law professor at the University of Notre Dame.

Trump was moving to nominate a woman to the court at a time when his 2020 reelection bid is faring especially poorly among female voters. At one point in a campaign rally in the battleground state of North Carolina on Saturday, he asked the crowd whether they wanted him to nominate a man or woman.

Democratic presidential nominee Joe Biden has helped expand the gender gap in his favor by choosing Sen. Kamala Harris of California as his running mate. Biden has promised to name a Black woman to the Supreme Court.

Ginsburg’s death leaves just two women on the court — Justices Sonia Sotomayor and Elena Kagan. The first and only other woman to serve on the court was Sandra Day O’Connor, who was nominated by President Reagan in 1981 and retired in 2006.

Trump won an important ally when Sen. Lindsey Graham (R-S.C.), chairman of the Judiciary Committee, which will hold hearings on the nomination, said Saturday that he would support “any effort to move forward” on a nomination.

That statement by Graham — who is in his own tough reelection fight — was a reversal of the senator’s own position in 2016, when Republican leaders refused to hold hearings on President Obama’s nominee. Graham said then that he opposed any effort to fill a court vacancy during a presidential election year. And in October 2018, he said, “If an opening comes in the last year of President Trump’s term and the primary process has started, we’ll wait till the next election.”

But one of the Senate’s most vulnerable Republicans facing reelection this year, Sen. Susan Collins of Maine, put herself bluntly in opposition to the president’s wishes.

“I do not believe that the Senate should vote on the nominee prior to the election,” she said. “In fairness to the American people, who will either be reelecting the president or selecting a new one, the decision on a lifetime appointment to the Supreme Court should be made by the president who is elected on Nov. 3.”

Looming over Republicans as they decide how to handle the issue is Ginsburg’s dying wish, conveyed by her granddaughter.

“In some of her final moments with her family, she shared her fervent wish to ‘not be replaced until a new president is installed,’” Harris wrote in a tribute Friday night. “We will honor that wish.”

Trump’s push, which is backed by Senate Majority Leader Mitch McConnell (R-Ky.), sets the stage for a political clash that seems likely to dominate both Capitol Hill and the presidential campaign for the six weeks until election day.

Still, the prospect of Trump making another Supreme Court appointment produced a fundraising bonanza for Democrats — including a group raising money to unseat McConnell, who is up for reelection this year. In less than 24 hours after the news broke, the “Get Mitch Fund” raised $12 million. Before Friday, its total fundraising haul has been $3.5 million.

In a move that made him a hero of conservative Republicans and laid the groundwork for Trump to leave a big mark on the court, McConnell in 2016 refused to allow the Senate to consider Judge Merrick Garland, Obama’s pick to replace the conservative Scalia, eight months before the election. The Senate never held a hearing, let alone a vote, on the nomination.

Hours after the news of Ginsburg’s death, McConnell announced Friday that the Senate would vote on Trump’s nominee, but pointedly did not say when that would happen. Typically it takes several months to vet and hold hearings on a Supreme Court nominee, and time is short ahead of the election.

Under the rules of the Senate, if McConnell has at least 50 senators ready to support a Trump nominee, there is little Democrats can do to stop it besides delay. But there is a significant question of whether McConnell will have those votes.

Collins’ statement opposing a preelection vote was a significant defection from one of the Senate’s few relatively centrist Republicans. She is facing the toughest reelection of her career this year in large part because her cross-party appeal eroded after she backed Trump’s Supreme Court nominee Brett M. Kavanaugh. But she runs a risk of alienating the Trump-backing Republicans she needs to win in Maine by saying the court vacancy should be filled by whomever wins the Nov. 3 election.

Asked about Collins’ statement Saturday, Trump told reporters, “I totally disagree with her.”

Sen. Lisa Murkowski (R-Alaska) had already said she would not vote to confirm a nominee this close to an election.

“I would not vote to confirm a Supreme Court nominee. We are 50-some days away from an election,” she told Alaska Public Radio on Friday before Ginsburg’s death was announced.

Another vulnerable Republican whose position is in doubt is Sen. Cory Gardner of Colorado. Also under scrutiny: Sen. Mitt Romney of Utah, who besides Murkowski has been one of the few Republicans in the chamber willing to defy Trump. And there is speculation on how the senators who value the Senate as an institution — such as retiring Sens. Lamar Alexander (R-Tenn.) or Pat Roberts (R-Kan.) — would vote.

Other Republicans facing tough election fights — Sens. Thom Tillis of North Carolina, Martha McSally of Arizona, Joni Ernst of Iowa and Kelly Loeffler of Georgia — have already rallied to Trump’s call for a vote on his nominee.

One option would be for McConnell to postpone the vote into a lame-duck session — when the existing Congress would meet after election day before the new Congress is sworn in. Senators like Collins up for reelection might then be less subject to political cross-pressures between the need to appeal both to Trump supporters and to swing voters.

But a lame-duck session would be rife with risks. Any GOP senators who lose their bid for reelection might be less willing to bow to the president’s wishes if they thought it ran counter to the message their voters just sent — especially if Trump is also not reelected.

On the other hand, lame-duck senators might feel more free to put another conservative on the Supreme Court, knowing that they won’t face voters again.

Newsmax, Once a Right-Wing Also-Ran, Is Rising, and Trump Approves

Supercut Shows Fox Personalities Saying Trump Will Never Do Something. He Just Did.

“What an idea, what a conjuring,” declared Fox Business host Lou Dobbs, a staunch Trump supporter, at the time. Make Serious Money with Our Simple Business Plan! This Business Plan has helped thousands of People!Make Serious […]