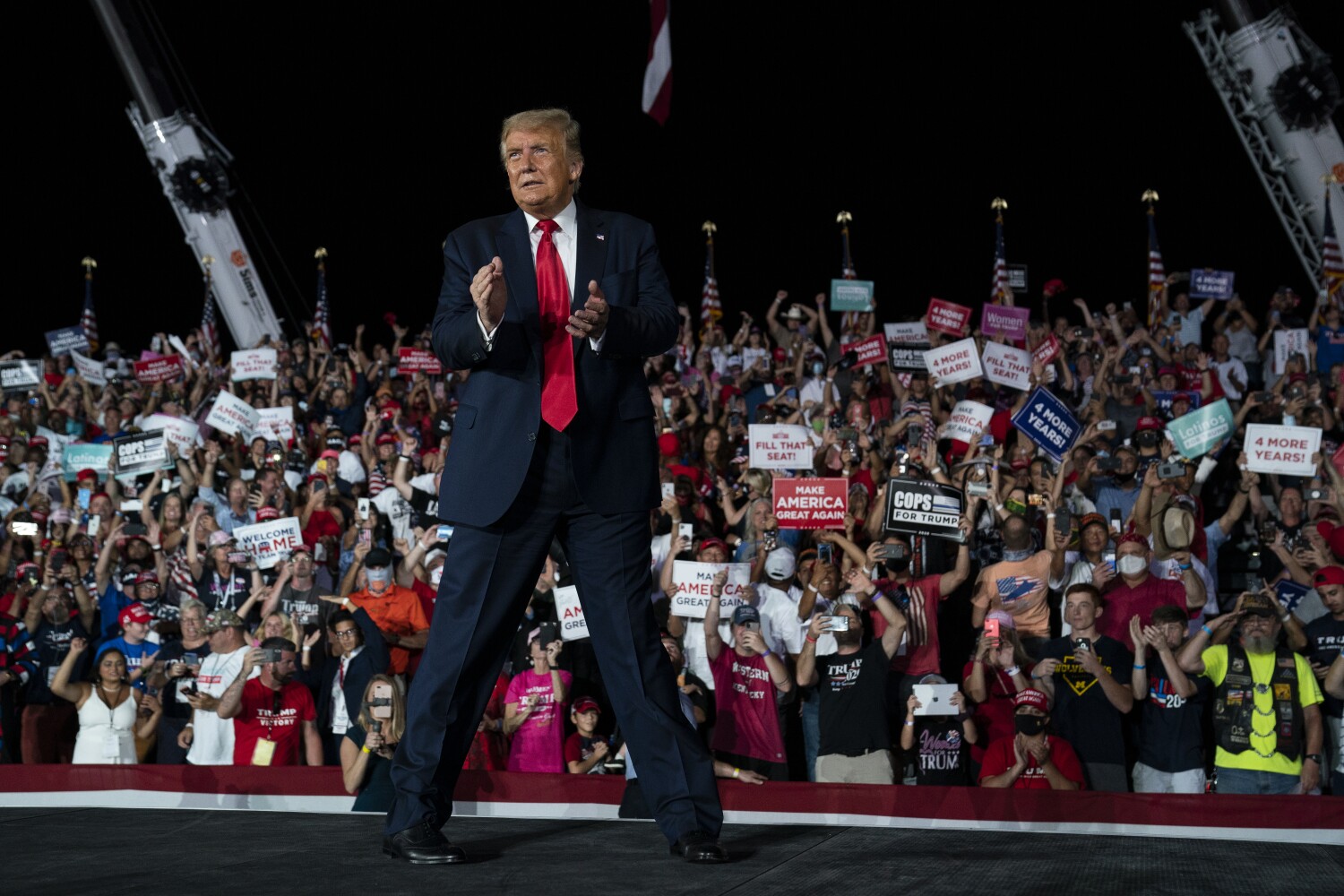 President Trump’s campaign appears in chaos and has cancelled TV ads in key states because it’s so short on cash. He’s sinking in polls and many Republicans fear he will take the Senate and state offices down with him on election day.

But Trump faced similar problems a month before the 2016 election and pulled off an upset victory for the ages.

That partly explains why Trump relives that triumph — often with minute-by-minute embellishments of that election night — at nearly every campaign event as this year’s race enters the final stretch.

Sure, he denounces the Democratic nominee, former Vice President Joe Biden. But it’s often almost an afterthought as he veers into another rant against his 2016 opponent, Hillary Clinton, her emails or former President Obama.

Supporters chant, “Lock her up!” in response, with an occasional twist: “Lock him up!”

“Four years they’ve been trying to get us out,” Trump said Monday night in Sanford, Fla., at his first rally since he was rushed to the hospital on Oct. 2 for COVID-19. “But we’ll take care of it all after the election. We caught ’em cold, caught ’em cold. Crooked Hillary.”

“And by the way, Obama and Biden knew everything that was happening, just in case you had any questions,” he added, before promising again to “take care of it after the election.”

Trump never says why he hasn’t had the former president or former secretary of State prosecuted over the last four years, but neither is under any criminal investigation.

Trump is so committed to his 2016 playbook that he never put it aside after taking office.

He has mocked, insulted and condemned Clinton in tweets or comments 1,249 times, on 533 days, or nearly 40% of his time in the White House so far, according to an analysis for The Times by FactSquared.

Trump’s advisors have said his attacks on Clinton, and his broader desire to rerun the last election, are borne more of instinct and anger than political strategy.

They also give Trump room, however, to avoid discussing the pandemic that has killed over 215,000 people in the United States — more deaths than in any other country — and the economic havoc that it has caused.

Fealty to the old playbook is prompting Trump to dismiss bad polls as fake, to mock Biden for refusing to hold large rallies despite the obvious health risks, and to seek investigations that could shake up the race, as they did four years ago. He’s hoping that the promise of a new Supreme Court justice will rally conservatives as it did last time.

In speeches and tweets, Trump still touts what he calls his achievements on trade and immigration, his top issues in 2016. But they no longer inspire the same enthusiasm among his followers.

Confined to the White House after his release from the hospital last week, Trump showed his frustration at the state of the race by lashing out at two of his most loyal aides for their supposedly lax attitudes toward Clinton.

He tweeted that he was “not happy” with Secretary of State Michael R. Pompeo because he did not release thousands of emails that Clinton had called “personal and private” and had deleted from a private server.

Pompeo later said he would release some of the emails before the election, but it’s not clear what will emerge. A State Department investigation last year found no “persuasive evidence” of mishandling of classified information, and the FBI twice concluded that Clinton should not face criminal charges.

“Unless Bill Barr indicts these people for crimes — the greatest political crime in the history of our country — then we’ll get little satisfaction, unless I win,” Trump said last week.

“John Ratcliffe is anything but an intelligence professional. It is appalling, his selective declassification of information. It is designed to advance the political interests of Donald Trump and Republicans who are aligned with him,” Brennan told CNN.

While many Americans are alarmed by Trump’s behavior, there is little evidence that it is helping his campaign.

Three weeks from election day, Biden is leading by an average of 10 percentage points in national polls — about 3 points more than Clinton did at this point four years ago.

Biden is also above 50% in many battleground states and has withstood many negative attacks of the sort that battered Clinton’s image.

Trump and his allies repeatedly cite his 2016 victory to argue that polls undercount Trump supporters — believing them too shy to speak with pollsters yet bold enough to wave Trump flags in large boat parades.

“You know, everything I hear, we’re winning by a lot. Then you turn on the fake news, they say the polls are tied in Florida,” Trump said at his Sanford rally. “I don’t get it…. Remember four years ago we had the same thing?”

Despite concerns about Trump’s health and the risks of large gatherings during the pandemic, he has resumed an aggressive travel schedule after nearly two weeks of being grounded by COVID-19.

“He’s our best asset, and it’s going to be a big shot in the arm to the campaign,” Bill Stepien, Trump’s campaign manager, told reporters.

Corey Lewandowski, an advisor, described seeing vast enthusiasm for Trump in battleground states, where polls tend to be tighter than the national average.

“It should give you an indication of what’s transpiring out there, the grassroots activities,” said Lewandowski, who was fired as Trump’s campaign manager in 2016.

He predicted that Trump’s enthusiastic crowds, coupled with support from law enforcement and a marginal increase in support from Black voters, would make it “mathematically almost impossible for Joe Biden to win this campaign.”

Democrats and most outside polling specialists use a different math, one that shows Biden with far more pathways to reach 270 electoral votes, and the White House, than Trump.

The president’s travel schedule reflects that. On Friday, he will campaign in Georgia, a state that last voted for a Democratic president in 1992 but that now appears a potential Democratic pickup.

“In 2016, he fit the mood of America, which was one of discontent and uncertainty. In 2020, it’s a year where voters are trying to find their balance and get things back on even keel,” said Peter Hart, a Democratic pollster. “He is a chaos president at a time when we need a stability president.”

At times, Trump has shown frustration that things are not lining up that way again.

This week, he complained on Twitter that Fox News, his top media ally, was running too many advertisements attacking him.