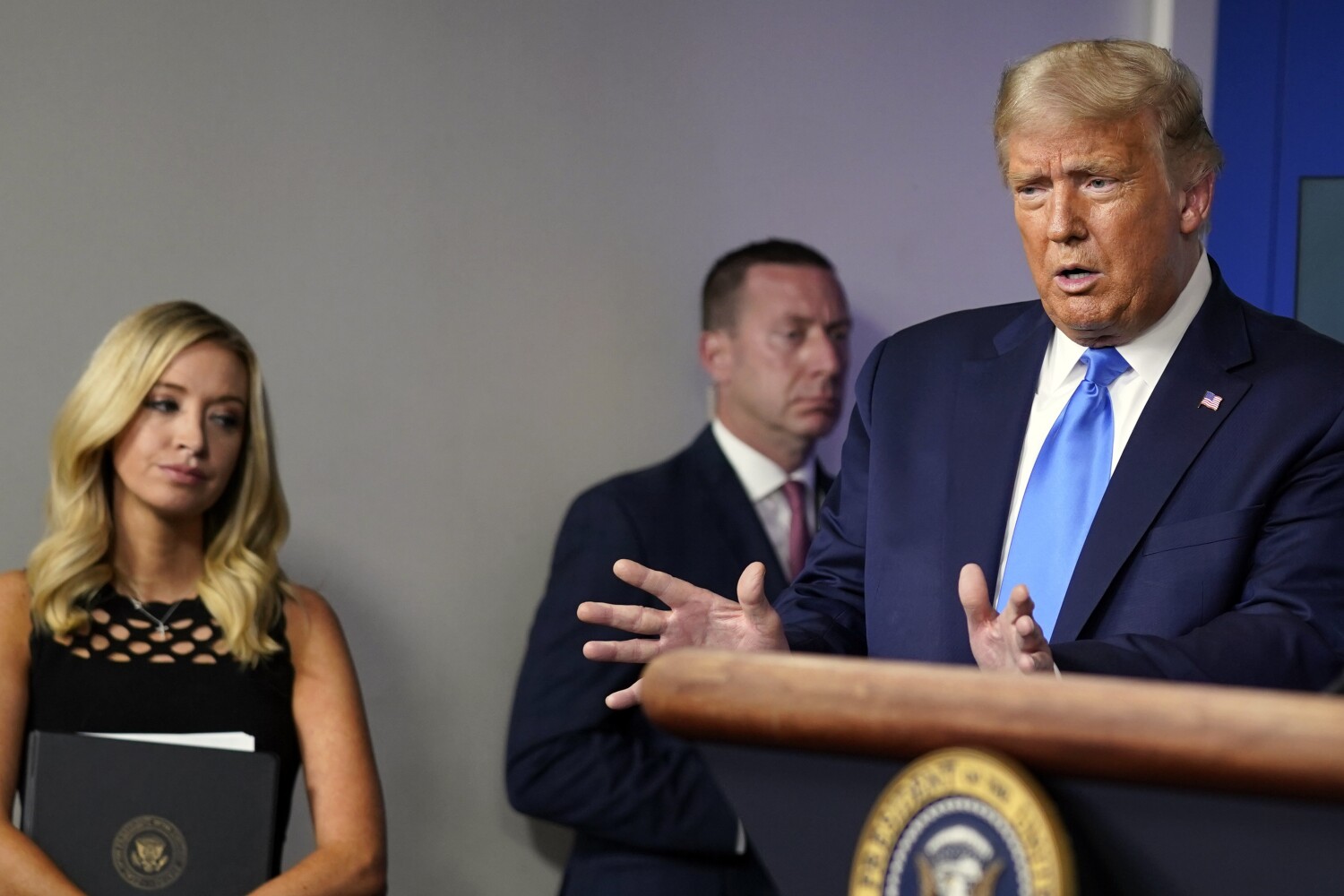 President Trump refused Wednesday to commit to giving up power should he lose the November race, adding to concerns that a contested election could lead to a constitutional crisis and a unique challenge to the nation’s democracy.

Trailing the Democratic nominee, Joe Biden, in national and swing state polls six weeks before Election Day, Trump again presented invented claims of voter fraud as a pretext for his campaign’s all but certain legal challenges and, for the first time, his possible refusal to vacate the Oval Office should he lose.

When a reporter noted the already combustible American landscape and asked Trump if he would “commit here today for a peaceful transfer of all power after the election,” the president declined to do so.

“We’re going to have to see what happens,” he said. “You know that I’ve been complaining very strongly about the ballots, and the ballots are a disaster.”

“We want to get rid of the ballots and you’ll have a very peaceful — there won’t be a transfer, frankly. There will be a continuation,” he added, suggesting that he would only view an election that he wins as legitimate.

Biden offered sarcasm but did not evince deep concern when he was asked about Trump’s statement.

“What country are we in?,” he said in Wilmington, Del., after a day of campaigning. “Look, he says the most irrational things. I don’t know what to say.”

Andrew Bates, a campaign spokesman, cited Biden’s statement on July 19. “The American people will decide this election,” he said at the time. “And the United States government is perfectly capable of escorting trespassers out of the White House.”

Trump’s declaration that “there won’t be a transfer” alarmed election experts, even those inured to his penchant for falsehoods and controversy.

“In case anyone is unclear on the concept, in the United States of America, we do not ‘get rid of’ ballots. We count them,” said Ellen L. Weintraub, a commissioner on the Federal Elections Commission. “Counting the ballots — all the ballots — is the way we determine who leads our country after our elections. The only way.”

Republicans were largely silent. But Sen. Mitt Romney (R-Utah), the party’s 2012 presidential nominee and a sometimes critic of Trump, condemned his refusal to commit to leaving office if he loses.

“Fundamental to democracy is the peaceful transition of power; without that, there is Belarus,” Romney tweeted. “Any suggestion that a president might not respect this Constitutional guarantee is both unthinkable and unacceptable.”

The president’s warnings of lawsuits and de-legitimizing of the voting process has added uncertainty to a country already convulsed by a pandemic, recession, racial strife and climate disasters.

“There’s an economic angle here, too,” Justin Wolfers, an economist at the University of Michigan, tweeted. “The legitimacy and stability of democratic institutions and the rule of law are critical to investment and to our long run economic health.”

The president’s comments came hours after he suggested that he would push forward with filling a vacancy on the Supreme Court because it might be called upon to resolve a disputed election.

Trump plans to nominate a conservative justice on Saturday to succeed liberal Ruth Bader Ginsburg, who died Friday, on the high court. The Republican-led Senate is expected to hold confirmation hearings in mid-October, and may hold a floor vote before Election Day.

If confirmed, Trump’s pick would ensure a 6-3 conservative majority on the court, including three justices nominated by Trump.

“I think this will end up in the Supreme Court,” Trump said. “And I think it’s very important that we have nine justices.”