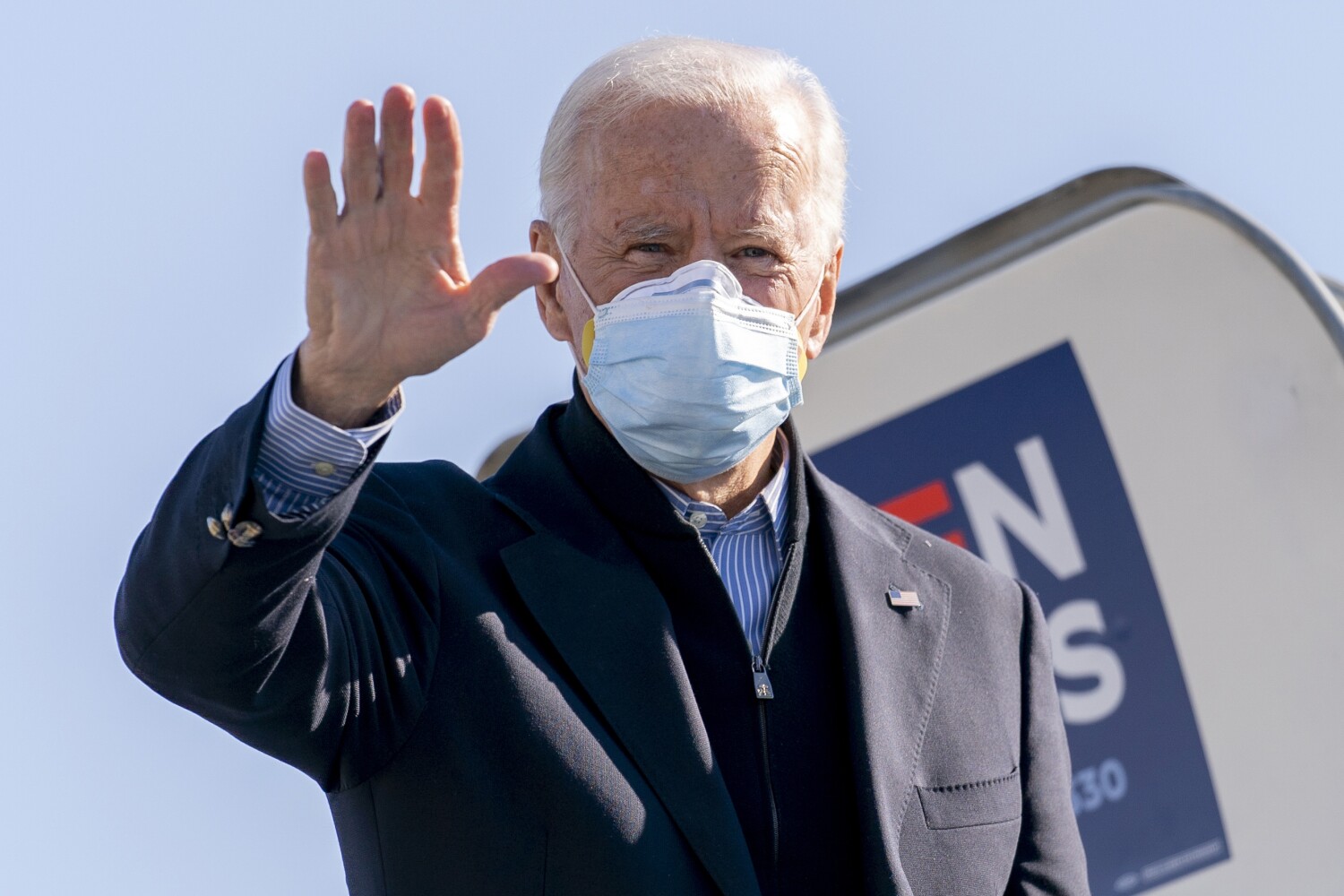 President Trump and former Vice President Joe Biden delivered final pitches in Pennsylvania and Michigan on Saturday, battling over the economy and the COVID-19 pandemic, as the two campaigns scoured for votes from a diminishing pool of Americans who have yet to cast ballots.

As former President Obama mobilized voters with Biden at drive-in events in Flint, Mich., and Detroit, and Trump scheduled four rallies across the Keystone state, anxious Democrats in Pennsylvania, Florida and other battleground states focused on finding alternatives for hundreds of thousands of voters who requested ballots by mail but may not return them in time to be counted.

Trump urged supporters to bypass early voting options in hopes of making up ground on election day, while railing against Supreme Court decisions that could let some states count ballots received days later, repeating unsubstantiated claims that votes not tallied by Tuesday are likely fraudulent.

“This is one opportunity to turn our country around and we’re not going to blow it,” Trump, whose voice has grown hoarse from campaigning and suffering COVID-19 last month, told a crowd of supporters on a muddy farm in Bucks County, Pa., where George Washington slept before crossing the Delaware.

Biden, promising a plan to gain control of COVID-19, hammered the same theme: “We’re done with the chaos, the tweets, the anger, the failure, refusing to take any responsibility.”

Biden continues to lead Trump in national polls by an average of about eight or nine percentage points, a relatively stable gap that surpasses Hillary Clinton’s polling edge from four years ago. But Trump and his closest political advisors believe they have a path to another upset, especially if they hold onto Pennsylvania, a key state in Trump’s 2016 victory.

One close Trump advisor called Pennsylvania “a dogfight,” despite several new polls showing a Biden lead of at least five percentage points in the state. Biden plans to campaign there Sunday.

Trump believes that his large packed rallies, which flout public health warnings, underscore heightened enthusiasm for his candidacy that will put him over the top among voters who wait until election day to show up at the polls.

“This doesn’t seem like someone who is going to come in second?” Trump told a roaring crowd in Reading, Pa., as he imitated the “honk, honk” sound of Biden’s drive-in events.

Trump’s rallies aim to erase the image of a country paralyzed by pandemic, and persuade voters that he can bring back jobs and lost income.

He claimed Biden would “lock down America” to gain “power and control over you,” while mocking the smaller groups of people that Biden addresses.

But it’s a risky message.

A Stanford University study of 18 Trump rallies released Friday, comparing impacts in similar communities to where the rallies were held, estimated that they led to 30,000 more COVID-19 cases and 700 additional deaths, though not necessarily among the attendees themselves.

Biden hoped to demonstrate a contrast with Trump’s style as he campaigned at smaller drive-in movie-style events with Obama and musical legend Stevie Wonder in Michigan, another state where Trump’s close victory in 2016 helped put him over the top.

Obama, citing the Stanford study, blasted Trump for focusing on the size of his rallies during a pandemic.

“Trump cares about feeding his ego. Joe cares about keeping you and your family safe,” he said in Flint.

“He hasn’t shown any interest in doing the work or helping anybody other than himself or his friends,” Obama said. “Unfortunately, the rest of us have to live with the consequences.”

Both he and Biden seized on Trump’s false claim on Friday that doctors are inflating COVID-19 death counts so they can make more money. “What the hell is wrong with this man?” Biden said. “It’s a disgrace, especially coming from a president who’s waving the white flag of surrender to this virus.”

The campaigns have been upended by a pandemic that has prompted 60% of the expected electorate to cast their ballots days before Saturday’s speeches.

Elections offices nationwide have counted more than 90.2 million votes through mail-in ballots or early voting, according to the United States Election Project, run by University of Florida professor Michael McDonald.

The early votes overwhelmingly favor Democrats so far, a reflection of Trump’s unsubstantiated warnings that voting by mail is not secure.

But Democrats are anxious about the mail-in ballots that have been sent out but not yet returned, particularly in Pennsylvania, where recent court rulings opened the possibility that ballots postmarked by election day but not received at election offices until later will be discarded. More than a quarter of the mail-in ballots requested by Pennsylvania voters had not been received in elections offices by Friday.

The Democratic data firm Hawkfish, funded by billionaire Michael Bloomberg, on Saturday warned the hundreds of thousands of yet-to-be delivered ballots of Biden voters are essential to his victory in Pennsylvania, Florida, Arizona and Georgia. “If these votes don’t get counted there is no way for Biden to win,” said Hawkfish CEO Josh Mendelsohn.

Trump made numerous unfounded claims that Pennsylvania’s election would be tainted while lambasting the Supreme Court for not slamming the door shut on accepting ballots after election day.

“You know when the cheating is going to take place — from the Third to whatever the date is that they” allow ballots, Trump said in Reading.