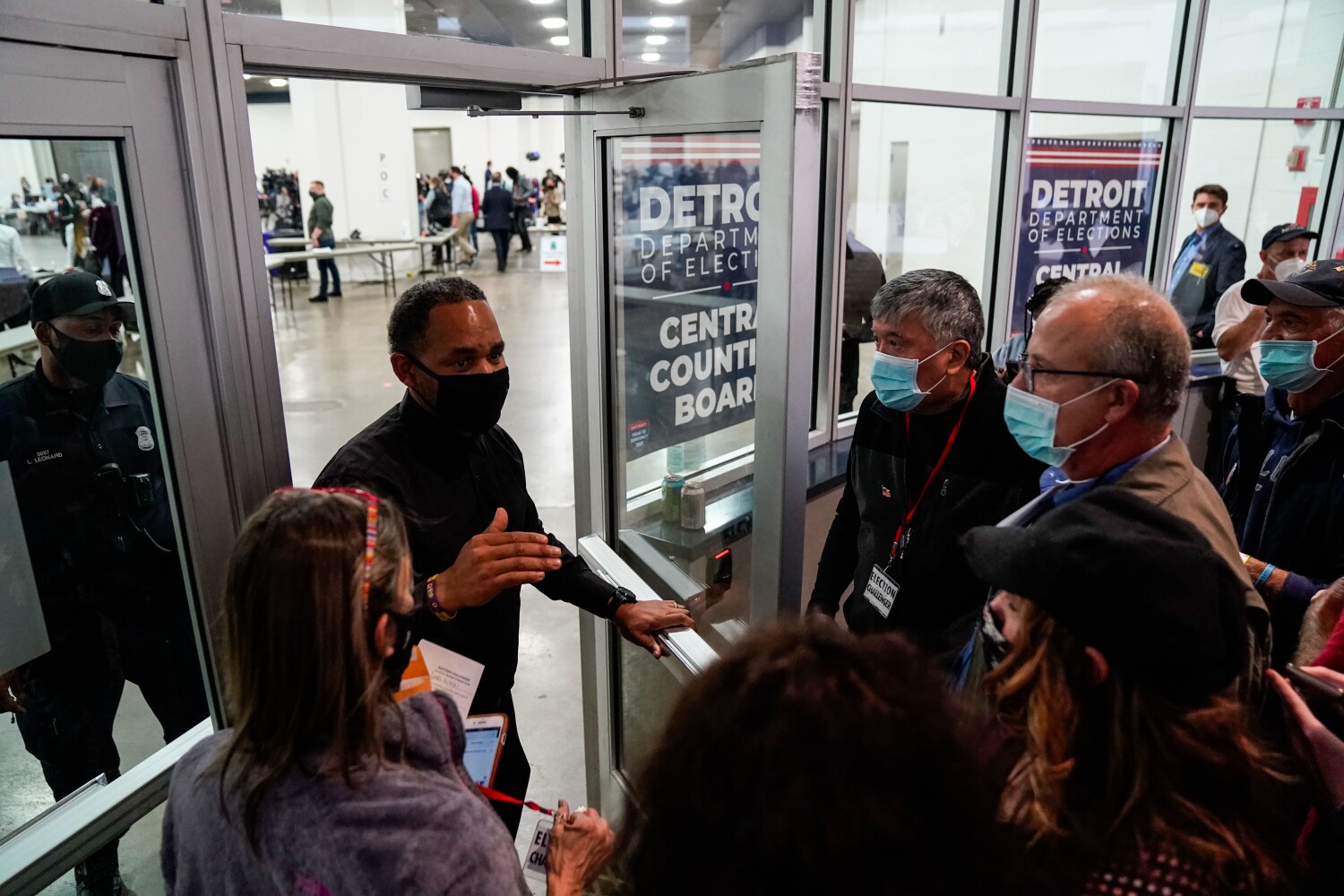 President Trump and his family and supporters continued to broadcast claims of voter fraud at the end of a long election week, struggling to head off results that increasingly appeared to be tipping toward Democratic challenger Joe Biden.

Among the unsubstantiated allegations were middle-of-the-night ballot dumps, votes coming in after legal deadlines and absentee ballots requested by people believed to be long dead.

But judges and other independent arbiters have found the charges to be false, misleading or so limited in scope that they could not possibly deliver Trump the thousands of votes he needs to reverse Biden’s lead in states such as Michigan, Wisconsin, Nevada and Georgia.

“The credible path is to actually be able to produce evidence in the individual states to show fraud, to throw the results in doubt. So far we have seen absolutely nothing that would rise to that level,” Benjamin L. Ginsberg, an election law expert and decades-long GOP stalwart, told CNN on Friday. “Bombastic statements do not work in the recount contest proceedings in states.”

Ginsberg has previously said that he had investigated voter fraud claims for decades and that he and other Republicans never found evidence to show problems widespread enough to alter the outcome of national elections.

That did not stop Trump, his family and his die-hard supporters from launching a series of dubious claims.

On Friday afternoon, for example, Donald Trump Jr. retweeted a message from a Trump backer showing a list of voters who had requested absentee ballots in Pennsylvania. The birth dates of all 10 voters were from the 1800s.

“Totally normal for 170-year-olds to be voting in Allegheny County, apparently,” the original tweet said.

But University of Florida voting expert Michael McDonald has noted that voter rolls often include typos. Actual proof of fraud would have to show that someone used an outdated registration to cast a ballot.

Similarly, a conservative activist claimed on Twitter to have found scores of Michigan voters who could not have possibly voted legally because of impossible birth dates. The New York Times tracked down some of the voters and found their birth dates had been incorrectly recorded.

“Fact check: Ballots of deceased voters are not counted,” the Michigan secretary of state’s office said via Twitter. “On rare occasions, a ballot received for a living voter may be recorded in a way that makes it appear as if the voter is dead.” But those votes are reviewed and “no one ineligible has actually voted, and there is no impact on the outcome of the election.”

The counting of the vote also produced claims of fraud from Republicans, as in one small Michigan county that relayed an incorrect vote total to the state. The state GOP chairwoman said that caused “a 6,000-vote swing against our candidates.”

The problem with this “fraud” — due to a human input error, according to the Michigan secretary of state — was that it was caught and corrected in less than an hour. If it had slipped past, it still would have been subject to review by a bipartisan panel of county election canvassers, who scrutinize all results in Michigan.

Republican poll watchers raised an alert in Chatham County, Ga., when they discovered 53 mailed ballots set aside on table. The observers theorized that the ballots must have come in after the 7 p.m. deadline on election day.

One hitch in the malfeasance claim: They had no evidence, and when lawyers for the Georgia Republican Party and the Trump campaign admitted that to a county judge, the accusation was promptly dismissed.

Another GOP contention has been that the party’s observers were not allowed equal access to watch voting and tabulation. That charge caused a particularly tense standoff in Detroit, but the two parties and a group of nonpartisan observers had more than 100 watching spots. At one point Wednesday there were far more people than allowed in the room, said David Porada, an attorney volunteering for the state GOP. So people were turned away until other observers left.

The Republican minders in Detroit also complained when their view was partially blocked by election workers who used paper to cover windows into the vote-count area. The ballot counters said they felt intimidated by menacing observers and also worried that the ballots themselves could be photographed or recorded by observers from close up.

With Biden eventually stretching his advantage in Michigan to nearly 150,000 votes, Democratic observers said it was hard to imagine how even successful challenges of a few ballots would make a difference in the final outcome.

In Wisconsin, GOP loyalists were sure they had found more cheating. One tweeted that the vote total of more than 3.2 million in the state was suspicious, because only a little more than 3.1 million people were registered. That claim was retweeted by many, even though the real registration figure was closer to 3.7 million two days before the election. And that did not count those who registered on election day, as state law allows.

Despite the lack of initial success, Trump showed no sign of turning down the volume. After sundown Friday, he tweeted that his leads in several states had “miraculously” disappeared after he took early leads.

That may have been a miracle the president helped create. He repeatedly disparaged mail-in voting, while Democrats voted by mail in huge numbers. Election experts predicted well before election week that Biden would dominate the mail-in voting, ballots that often would be counted last.

The Perfect Mix: Politics and Comedy