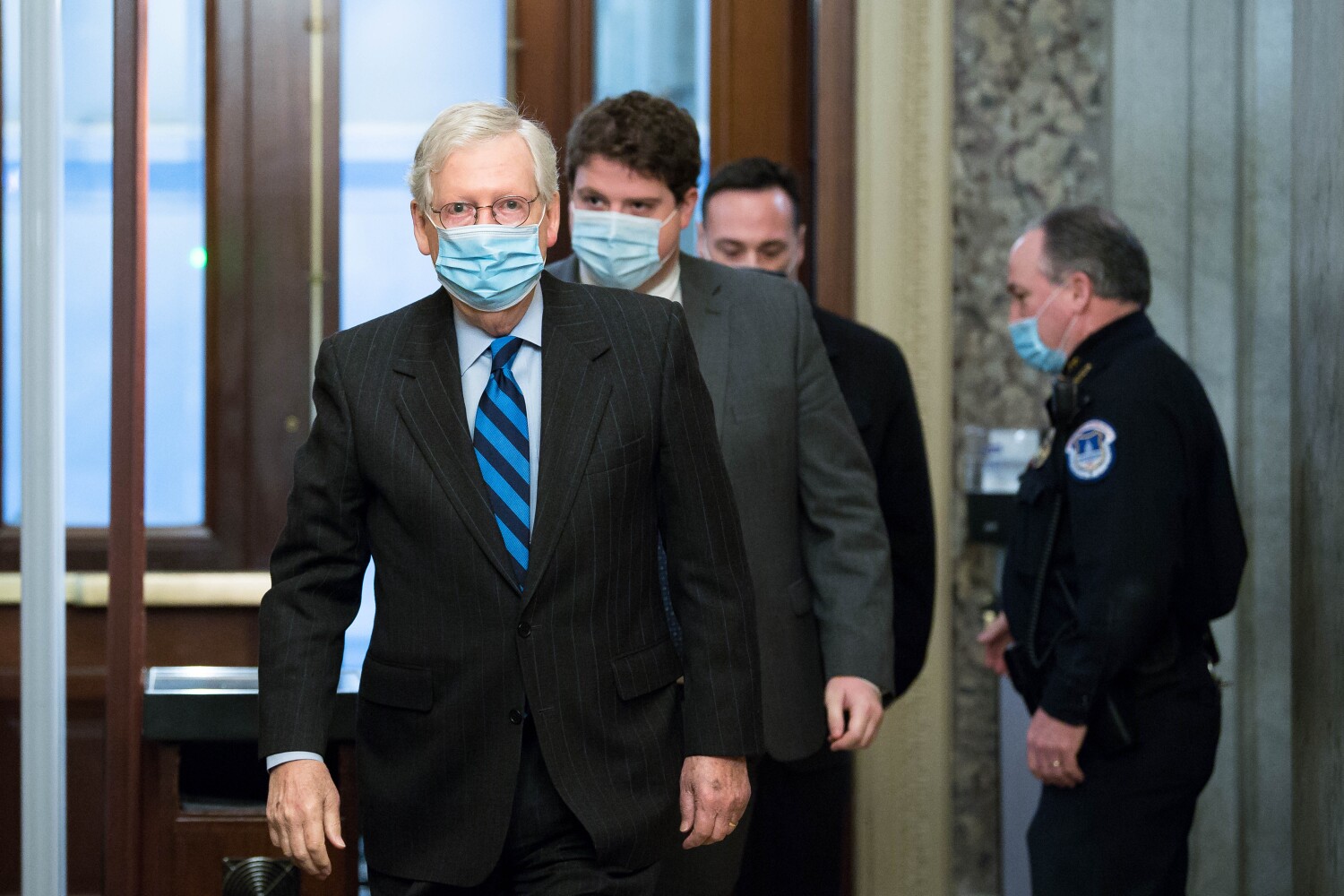 The Senate voted Friday to override President Trump’s veto of the National Defense Authorization Act, marking the first override of Trump’s presidency and delivering a rare, emphatic and final rebuke by GOP lawmakers who have mostly demonstrated unwavering fealty to the president.

The clear defeat could further strain the relationship between Republican lawmakers and Trump, who said he vetoed the $740-billion spending package, a key piece of legislation that funds the military, because of a provision to rename military bases that honored Confederate officials and failure to repeal a liability shield for social media companies.

But just days ahead of two critical Senate runoff contests in Georgia that will determine which party controls the chamber, lawmakers joined forces Friday to overwhelmingly reject Trump’s complaints. The 81-13 vote margin was more than enough to clear the required two-thirds majority and ensure passage of a bill they called “essential” in deterring an aggressive China, protecting the U.S. from a new wave of cyberattacks and supporting the nation’s troops around the world.

The House voted Monday to override Trump’s veto, and there was little Senate debate Friday before proceeding to the final vote.

“President Trump tried to make this vote a loyalty test and an overwhelming majority of U.S. senators demonstrated their loyalty to the common defense and to the men and women of the United States Armed Forces who defend our nation,” said Sen. Jack Reed of Rhode Island, the ranking Democrat on the Armed Services Committee.

“The truth is: Both parties care about national security and this bill earned overwhelming bipartisan support because it strengthens our defense capabilities — including our cyber defenses — and enhances the military’s ability to respond to COVID-19 and a host of evolving threats and challenges.”

Following the House vote to override his veto, Trump blasted “Weak and tired Republican leadership” in a tweet and called the action by lawmakers a “disgraceful act of cowardice and total submission by weak people to Big Tech.”

Lawmakers in both parties have pointed out that Trump’s demands to jettison liability shields for tech companies was not germane to military policy or spending. Social media titans Twitter and Facebook have drawn Trump’s ire for putting warning labels on dozens of his demonstrably false missives.

After four years of endless loyalty tests that have effectively cowed congressional Republicans into a submissive posture, Trump is finally bumping up against the limitations of his political power in the final weeks of his presidency.

After taking action last week, Trump didn’t appear to bother to lobby lawmakers against overriding his veto revamping the defense bill to his liking. Sen. John Thune (R-S.D.), the No. 2 GOP lawmaker in the Senate, told reporters he received no outreach from the White House in recent days and didn’t know of any colleagues who did.

And Trump sought to deflect attention from the final Senate vote, tweeting afterward about his ongoing efforts to overturn his election defeat and a rally by his supporters here next week while ignoring the thumping lawmakers handed him.

The veto override on the first day of the new year comes as Senate Majority Leader Mitch McConnell has blocked a bill to increase direct COVID-19 relief payments to families from $600 to $2,000, something Trump demanded.

Like his last stand on the NDAA, Trump waited until after an agreement had been reached to weigh in on COVID-19 assistance. His demands have pitted Republicans against each other, providing a final illustration of the chaos unleashed by a president who lacks his own agenda and is uninterested in the legislative process.

After House Democrats, who had long sought the larger payments, quickly passed an amendment beefing up the direct relief checks, McConnell opted to fold the measure into a vote on repealing Section 230, making the proposal unpalatable to both Democrats and Republicans and effectively killing it.

During floor debate Friday, Senate Minority Leader Charles E. Schumer and Sen. Bernie Sanders (I-Vt.) lambasted Republicans for avoiding an up or down vote on sending people $2,000 checks. Calling it “the last chance” to take that action, Schumer suggested there would be political fallout for Republicans just days before the critical runoff election in Georgia that could swing control of the Senate to Democrats. Voters “will know that Leader McConnell and Republicans” blocked the push to put more money in people’s pockets, he said.

Republicans, in outlining their opposition to the proposal, have argued that the additional relief isn’t sufficiently targeted to help the Americans who need it most.

Trump, hunkered down Friday inside the White House, attacked Thune on Twitter shortly after the senator had argued against the bigger relief checks on the Senate floor, suggesting that South Dakota Gov. Kristi Noem, who has become a staunch defender of the president, mount a primary challenge to Thune in 2022.

“She would do a fantastic job in the U.S. Senate, but if not Kristi, others are already lining up,” Trump tweeted. “South Dakota wants strong leadership, NOW!”

Sen. Lisa Murkowski (R-Alaska), one of the few GOP lawmakers willing to criticize Trump throughout his presidency, told reporters she found it “very dispiriting” that the president would “pit Republicans against Republicans” on New Year’s Day, lamenting that such behavior from him is hardly unexpected.

“He has demanded a loyalty test from so many Republicans and then when … there is one incident, one [critical] statement and he is the first one to throw those loyal individuals under the bus — that’s not loyalty as I know loyalty,” Murkowski said.

The growing rancor between the president and some Republicans is prologue to the ultimate and perhaps final loyalty test — the final ratification by Congress on Jan. 6 of the 2020 election results.

Having failed to reverse his November defeat with dozens of meritless lawsuits or to uncover any election fraud through recounts and audits, Trump has tried in recent days to pressure GOP allies to flout the will of voters and declare him the winner.

A handful of Republicans in the House and at least one senator, Republican Josh Hawley of Missouri, have said they will formally challenge the election results next week, forcing debate and an eventual vote in both chambers on whether to accept the electoral college results that show former Vice President Joe Biden to have won.

With McConnell and other GOP lawmakers having already recognized Biden as the president-elect and expressed frustration with Hawley, it’s all but certain that Trump’s final gambit will fail.