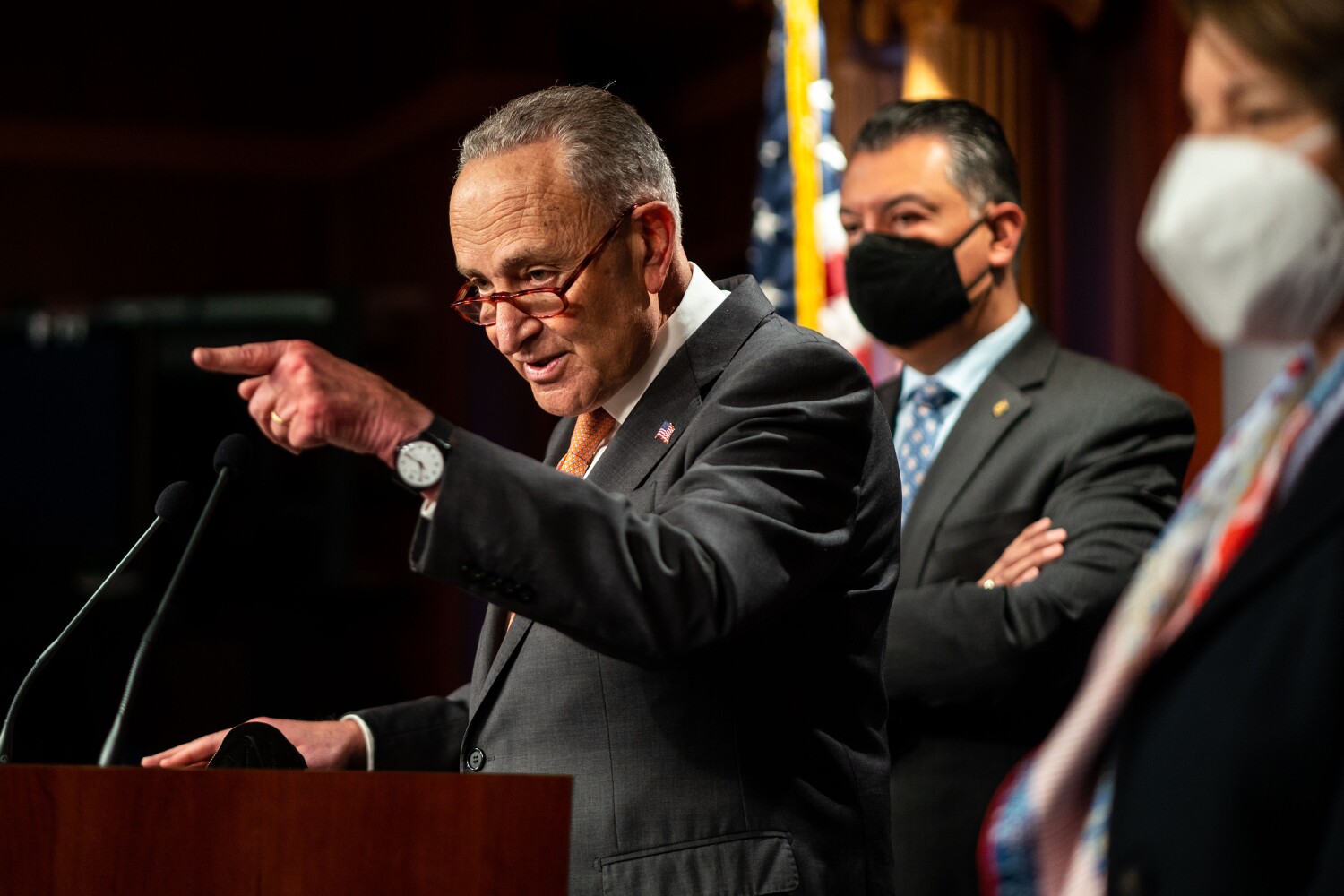 The Senate on Wednesday was barreling toward a showdown on voting rights legislation and rules changes, even as Democratic leaders conceded they don’t yet have the 60 votes needed to pass a bill — or even the 50 votes needed to change the rules and circumvent a GOP filibuster.

“We’re not there yet,” Senate Majority Leader Charles E. Schumer (D-N.Y.) told reporters Wednesday morning. “I wouldn’t want to delude anybody into thinking this is easy, but we’re trying to come to a place where 50 senators can support two bills, the Freedom to Vote Act and the John Lewis Act, and with a change in the rules so we can get the votes to pass these bills into law.”

In a memo to Senate Democrats on Wednesday afternoon, Schumer outlined a path forward, explaining that there’s an existing rule that will allow the Senate to begin debate on voting rights legislation with a simple majority by taking up what’s called a “message” from the House. The Democratic-led House is expected to send the voting rights bill as a message to the Senate, perhaps as early as Wednesday night.

The memo concludes with Schumer acknowledging that Democrats will either need 10 Republicans to end debate and pass the legislation, or to change the filibuster rules.

“If the right to vote is the cornerstone of our democracy, then how can we in good conscience allow for a situation in which the Republican Party can debate and pass voter suppression laws at the state level with only a simple majority vote, but not allow the United States Senate to do the same?” Schumer asked. “In the coming days, we will most likely confront this sobering question — together.”

The memo comes ahead of President Biden’s meeting Thursday with Senate Democrats. Biden is expected to urge Democrats to pass the pair of voting rights bills, even if it requires amending the rules.

Biden and Vice President Kamala Harris also plan to encourage senators to support voting rights legislation and rules changes in phone calls over the next several days, according to the White House.

In a letter to colleagues this month, Schumer vowed the chamber would debate and consider changes to Senate rules by Jan. 17, Martin Luther King Jr. Day, if Republicans refused to work with Democrats on voting rights legislation. Senate Republicans have dismissed Democrats’ proposals as a federal takeover of elections.

Republican-led state legislatures across the country have enacted new voting laws in the wake of the 2020 election that make it more difficult to cast a ballot. Republicans argue the so-called voter integrity policies, such as requiring voter identification to cast a ballot and limiting drop boxes, are intended to restore faith in elections after President Trump falsely claimed widespread voter fraud.

Democrats have described the GOP policies as voter suppression and “Jim Crow 2.0,” saying that many of the new laws disproportionately affect people who tend to vote Democratic, such as young voters, people of color and people with disabilities.

To combat the new legislation in the states, congressional Democrats are eyeing two voting rights bills. The first, the Freedom to Vote Act, would expand voter registration with automatic and same-day registration, and increase access to the polls by expanding early and absentee voting. It would also make election day a federal holiday and includes additional provisions on congressional redistricting and campaign finance.

The other measure, the John R. Lewis Voting Rights Advancement Act — named after the late civil rights icon — would create new criteria for determining which states must receive preapproval from the Justice Department or U.S. District Court for the District of Columbia before making laws that would affect voting rights. The measure also includes protections for election workers, polling places and election infrastructure.

Biden, in a speech delivered in Atlanta on Tuesday, endorsed Senate Democrats’ reforming the filibuster. He warned that history would not look kindly on those who voted against voting rights legislation.

“I ask every elected official in America: Do you want to be on the side of Dr. King or George Wallace?” Biden said. “The side of John Lewis or Bull Connor? The side of Abraham Lincoln or Jefferson Davis?”

House Democrats, who passed the Lewis bill in August, cheered the president’s forceful address. Speaker Nancy Pelosi (D-San Francisco) warned that the nation is facing “the most dangerous assault on the vote since Jim Crow.”

“The need to protect our democracy could not be more urgent,” she said in a statement. “Nothing less than our democracy is at stake.”

Given Senate Republicans’ overwhelming opposition, however, Senate Democrats can’t pass either bill without changing rules that require 60 votes to overcome a filibuster and pass most legislation. Senate Democratic and Republican leaders have already eliminated the filibuster for judicial and Supreme Court nominations.

But Sens. Joe Manchin III (D-W.Va.) and Kyrsten Sinema (D-Ariz.) have resisted efforts to abandon the filibuster for legislation.

Manchin acknowledged Tuesday that “to make this place work better, we do need some rules changes.” He told reporters this week that the motion to proceed, a procedural vote in the Senate to determine whether to open debate on a bill, should be a simple majority instead of 60 votes.

He also signaled an openness to a so-called talking filibuster, which would require opponents of a bill to continually speak in order to block it, or a rule that would require only three-fifths of members actually present during a vote to overcome a filibuster, rather than the current fixed 60 votes.

“To break the opportunity for the minority to participate completely, that’s just not who we are,” Manchin said. “I’m not for breaking the filibuster. But I am for making the place work better by changing the rules.”

A group of Democrats met with Sinema for 2½ hours Tuesday night, Schumer said, and Schumer joined that same group in an hourlong meeting with Manchin on Wednesday morning.

“I have no comments today,” Manchin later told a group of reporters.

Litman: Why doesn’t Biden sue to get the transition going?

Occupants of the real world recognize that Joe Biden won the 2020 presidential election. His lead is far too large to reverse, and President’s Trump’s disingenuous defenders haven’t even offered a legal theory, much less […]

Column: Is there any realistic possibility of ousting Trump early?

After President Trump’s disgraceful performance on Wednesday, it’s no wonder so many legislators — including a few Republicans — want to oust him immediately. But if the goal is practical — to get Trump out […]

Times coverage of the runoff elections for the two U.S. Senate seats in Georgia. The votes are to be held January 5, 2021. Source link Politics