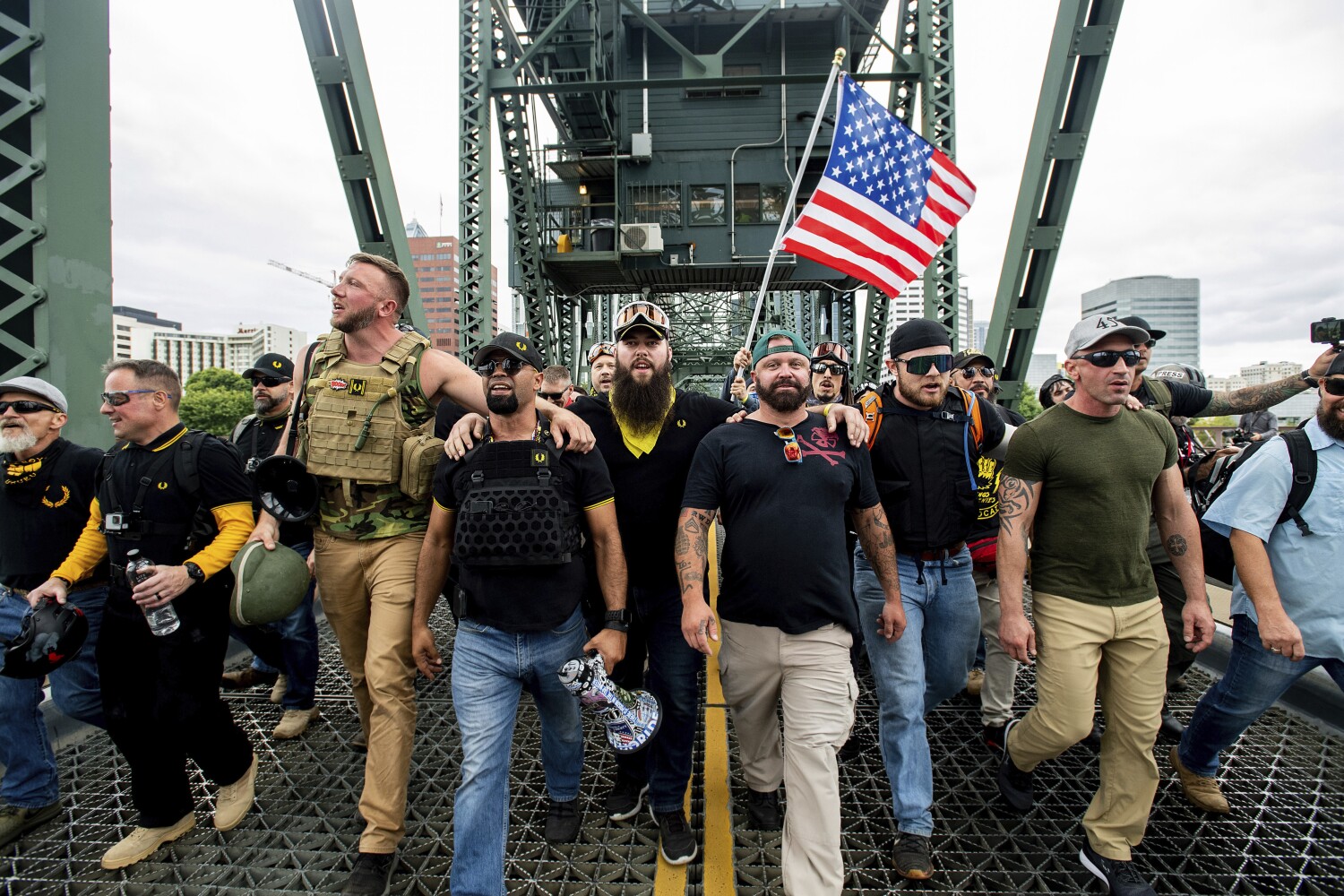 To prepare a bull for a traditional Spanish bullfight, trainers have been known to smear Vaseline in its eyes, shove wet newspaper up its nose and jab its testicles with needles.

No one had to abuse President Trump before the debate Tuesday. Riled is his natural state. But he did come off like a wounded bull, weakened and disoriented, in the throes of a neural storm he seemed to hope would come off as ferocity. The performance was degrading and sinister in equal measure.

In response, Democratic nominee Joe Biden played less a matador than a Humane Society rep. He’s not a killer. Instead, he shook his head and laughed sadly at the bullyboy. He also pleaded with voters, more in sorrow than in anger, to make Trump’s protracted dance of death stop.

To no one’s surprise, Trump could not be stopped on Tuesday. He snarled, bellowed and pawed the earth, and when that wasn’t working, he did something genuinely chilling. He called out for Nazi reinforcements.

If “Nazi” seems too strong for the Proud Boys — a neofascist fight club whose paunchy, hard-drinking adherents seem to be staging a Hells Angels reboot — it’s crucial to acknowledge that Godwin’s Law no longer applies. Mike Godwin himself, the lawyer who once argued that you lose a debate when you compare your opponent to a Nazi, backtracked in 2017.

Referring to Trump’s “very fine people,” the white supremacists who marched in Charlottesville, Va., including the one who killed counter protester Heather Heyer, Godwin tweeted, “By all means, compare these [lunkheads]” — he used a stronger word — ”to Nazis.”

Back then, of course, Trump was merely praising Nazis. Now, he’s giving them marching orders.

Chris Wallace, another uncertain matador, gave Trump a chance to put to rest the persistent rumor — gotta be a rumor, right? — that he’s actually allied with white supremacists. Trump declined. Instead, he signaled to the Proud Boy minions to “stand by” because, he went on, “Somebody’s got to do something about antifa and the left.”

On Wednesday the president tried unpersuasively to backpedal. “I don’t know who the Proud Boys are,” he told reporters. White supremacy remained uncondemned.

The Proud Boys got the message. They crowed on social media. They embellished their merch, adding “Stand by” to their T-shirts.

The Proud Boys have already served as bodyguards for far-right showfolk, including Ann Coulter and Milo Yiannopoulos. Sometimes this has meant clashing with protesters. In their black-and-yellow Fred Perry polo shirts, the Proud Boys look for all the world like a throwback to the Sturmabteilung — the Storm Detachment— the Nazi paramilitary charged with “security”: harassing, hurting and killing Jews, union members, leftists and progressive activists not unlike Heyer.

But “doing something about antifa and the left” evidently wasn’t the only task Trump had in mind for his followers. In a lying rant about “very safe, very nice” people being thrown out of a Philadelphia polling place (which tweets had flagged as a lie earlier in the day), Trump seemed to gesture at deploying an army of goons to menace voters.

Here’s what he was lying about this time: Several Trump campaign workers were barred from a satellite election office in Philadelphia where early voting was taking place because 1) partisan poll watching is only allowed on election day, and 2) they weren’t certified as poll watchers to begin with.

(Note: Neither a campaign worker nor any old member of the public can just hover over voters, shoot them dirty looks and breathe down their necks. That’s intimidation.)

Trump said from the debate stage, “I’m urging my supporters to go into the polls and watch very carefully…. Bad things happen in Philadelphia, bad things. And I am urging my people.”

This Bad Philadelphia story was widely construed as the latest installment in Trump’s effort to scare voters and cast doubts on the election’s legitimacy. “Go into the polls and watch very carefully.” “Do something” about the left. When was the last time you heard another president “urging” thugs to do such things? It beggars belief.

And of course the Proud Boys cheered. They boasted about getting a record number of new recruits Tuesday night. Sure, they’ll dutifully lie low, if that’s what their leader wants, for now. But they’ll await further orders.

When he could get a word in edgewise on Tuesday, Biden called Trump “the worst president America has ever had.”

True, as far as it goes.

But Trump is also giving non-American leaders — leaders in Europe in the 1930s and 1940s, say — a run for their money.

Under Trump, Federal Watchdogs Get Muzzled

Donald Trump praises JPMorgan Chase for ordering everyone BACK TO OFFICE