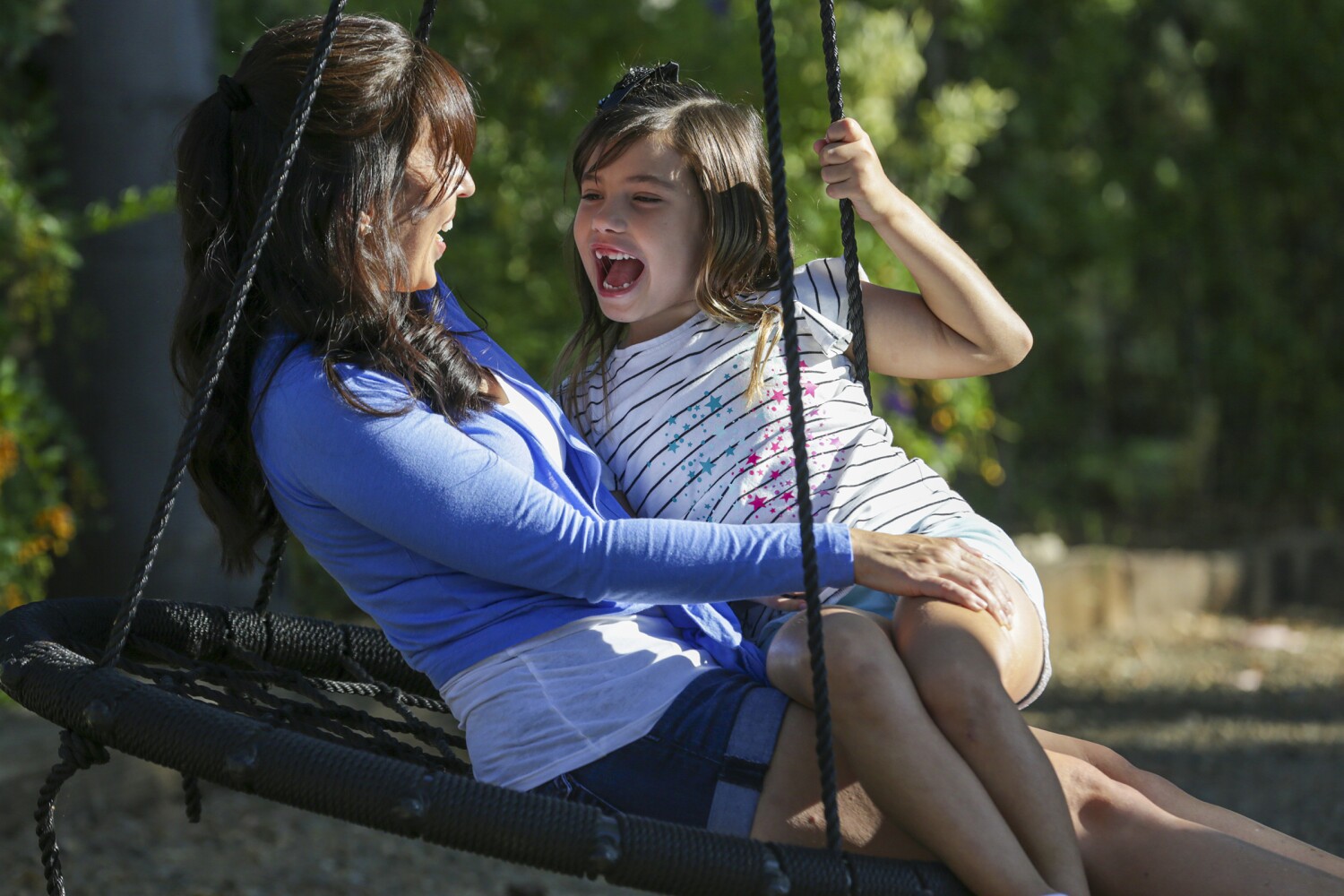 Evangelina Padilla-Vaccaro is the poster child for a disease she doesn’t know, an illness she doesn’t remember. The energetic young girl who is happiest playing outside was born without an immune system, prompting months of uncertainty over whether she would survive.

That was until a clinical trial that received funding from a 2004 bond measure in California offered hope — and then a cure for severe combined immunodeficiency, a condition often called bubble baby disease.

Now, with the money from that bond running out, supporters of the state’s stem cell agency are asking taxpayers for a new infusion of cash. If approved, Proposition 14 would authorize the sale of $5.5 billion in general obligation bonds for the California Institute for Regenerative Medicine, known as CIRM, for stem cell studies and trials.

With interest, the bond could cost the state $260 million per year, or $7.8 billion, over the next 30 years, according to the nonpartisan Legislative Analyst’s Office.

“It took years of research for Evangelina’s therapy,” said the girl’s mother, Alysia Padilla-Vaccaro of Corona. “We need to build on other cures and treatments. This will save us money over the long term.”

Proposition 14 has no organized opposition and, so far, no one willing to put their money into fighting it — but the measure does have critics. Newspaper editorial boards, including those at the Los Angeles Times and San Francisco Chronicle, have opposed it. Opponents include CIRM board member Jeff Sheehy, who says the state shouldn’t take on new debt while facing a pandemic-induced deficit and that medical advances attributed to the previous stem cell bond have been overstated.

The campaign to pass the 2004 ballot measure told voters that the bond would save millions of lives and cut healthcare costs by billions. Critics say that’s not been the case to date, although supporters of this year’s measure note that they never intended those results within 16 years.

“Paying with debt means that money comes before education, healthcare and housing,” said Sheehy, the only member of the CIRM board to oppose Proposition 14. “Debt is paid for first [under the rules of the California Constitution]. Not only are we spending 30 years into the future, we are saying we will pay for this before anything else we need in the state. I don’t think voters understand that.”

California taxpayers created CIRM in 2004 when voters approved Proposition 71, a $3-billion bond that will have cost the state an additional $3 billion in interest by the time it’s paid off. CIRM used that bond money for research grants, new laboratories and training programs, but unallocated funds ran out last year.

Proposition 71 passed with 59% of voters in favor, aided by celebrities including actors Michael J. Fox, who has Parkinson’s disease, and the late Christopher Reeve, who was paralyzed from the neck down. That ballot measure also created a state constitutional right to conduct stem cell research, an effort to counter then-President George W. Bush’s decision to cut off federal funding following religious opposition to using human embryonic stem cells. Last month, a group of Republican members of Congress wrote a letter urging President Trump to reinstate those restrictions, which supporters of this year’s measure say underscores the need for California to continue to separately fund stem cell research.

Proponents of Proposition 14 say the measure will help find new treatments and cures for chronic diseases and conditions, including cancers, spinal cord injuries, Alzheimer’s, Parkinson’s and heart disease. They say the previous bond advanced research and treatments for more than 75 diseases, including two cancer treatments for fatal blood disorders that were approved by the U.S. Food and Drug Administration.

Without new funding to keep the program going, supporters of Proposition 14 say groundbreaking medical discoveries and lifesaving research will be slowed or stopped.

Alzheimer’s disease researcher Dr. Larry Goldstein, who works at UC San Diego, said the state’s stem cell agency fills a void in critical grant funding. He said industry, venture capital and federal funding is available, but often goes toward research showing promising results in late-stage trials. He said money is needed, however, to move a scientific discovery to that point. That gap, which he said is referred to as the “valley of death” in research, has been filled by CIRM grants.

“It was getting more and more difficult to fund novel, risky and creative scientific projects,” Goldstein said. “CIRM has done a good job of funding parts of my research that were particularly risky that have led to a particular payoff.”

Sandra Dillon said the potential payoff to California residents sickened by disease is worth taxpayers’ money. Dillon was 28 years old when she was diagnosed in 2006 with a rare form of blood cancer called myelofibrosis. At the time of her diagnosis, Dillon said there was no treatment options or cures. The survival rate was five to seven years, she said.

“My doctors said we could treat the symptoms as I got sicker,” said Dillon, who is now 45.

Over the years she did get sicker, becoming chronically fatigued, her body often aching and she experienced the feeling of her skin crawling. The San Diego resident was able to enroll in an experimental trial that received funding from Proposition 71. The treatment pushed her cancer into remission.

“Continuing the funding and research is essential,” Dillon said. “There are still things we need to solve and people are out there making the same plea I was making. I want people to have a chance to get the same kind of answer I was given.”

In the case of now 8-year-old Evangelina Padilla-Vaccaro, who goes by Evie, CIRM funding helped pay for a clinical trial at UCLA where her stem cells were genetically re-engineered and returned to her body to rebuild her immune system during the first months of her life. There have now been around 50 babies cured of the rare disease, according to CIRM.

“If this passes, there will be other parents telling the same story as me, that science was there to keep their family whole,” Alysia Padilla-Vaccaro said.

Proponents of Proposition 14 have raised $12.3 million for their campaign, while there have been no funds raised in opposition.

The largest funder of the campaign is real estate investor Robert Klein, who drafted the previous ballot measure and, once passed, went on to be CIRM’s first chairman — a move that sparked criticism from lawmakers.

That wasn’t the only criticism the stem cell agency has faced. The state’s independent Little Hoover Commission wrote in 2009 that the agency’s “governance structure is not adequate to protect taxpayers’ interests or serve its own ambitious goals.” The National Academy of Sciences said in 2012 that CIRM had “conflicts of interest, whether actual or perceived.”

The 2004 ballot measure placed CIRM outside the oversight purview of state lawmakers and the governor, allowing changes to the agency only if a bill is approved by 70% in each house of the Legislature and signed by the governor. That structure remains the same under Proposition 14.

Proposition 71 mandated that CIRM’s board comprise officials from California universities and other research institutions, patient advocacy groups and biotech firm executives, which are the same groups that apply for CIRM funding. Under Proposition 14, the governing board would increase from 29 members to 35.

Supporters of the November ballot measure say strict conflict-of-interest rules are in place to ensure board members are not voting on funding for their own institutions. However, previous instances have drawn concern, including a situation in 2007 when CIRM board member John Reed attempted to reverse the institute’s decision to reject a grant to his nonprofit medical research institute, prompting a warning letter from the state’s ethics watchdog.

In 2014, CIRM’s president at the time, Alan Trounson, left the agency to join the board of Stem Cells Inc., which had received millions in funding from CIRM.

“The history of this agency hasn’t been a smooth ride,” said Sheehy, who was appointed to the CIRM board in 2004.

Sheehy said he’s been dismayed by claims now being made by proponents of Proposition 14 that he said mischaracterize some achievements as being the direct result of CIRM funding when the agency’s role was limited. If a major drug was developed with CIRM’s funding, the state would receive a royalty, patent or licensing revenue. To date, the agency has received $462,433, a fraction of what voters were told the state would take in. A Proposition 14 spokeswoman said 900 patents have been filed as a result of CIRM funding and “royalties are on the way.”

Sheehy said he is doubtful that the bond-paid research will result in the level of returns proponents are claiming. He said claims that critical research will come to a halt are not true and that CIRM’s bond money would be replaced with other private and federal funding sources.

“The state can’t just keep giving money to this forever,” Sheehy said. “It was never meant to be a permanent thing. It was for a specific unmet need that doesn’t exist anymore.”