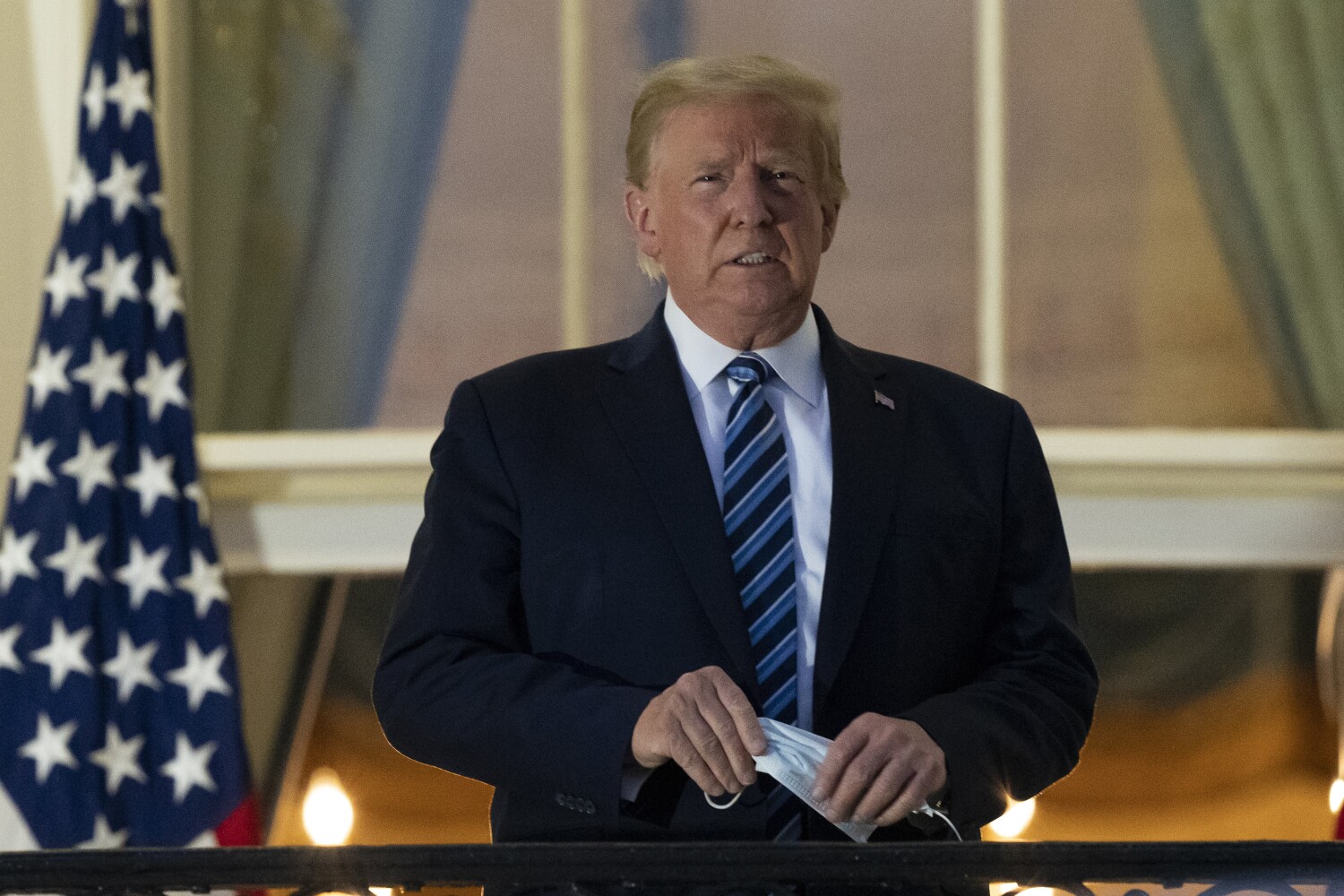 In a tableau befitting a surreal election season, there may be more raccoons around the White House than actual staff now — and a contagious president sneaking into the West Wing.

With the iconic white-columned building now a coronavirus hot zone, and a pack of hungry raccoons near reporters on the North Lawn at dawn Wednesday, President Trump, still being treated for COVID-19, escaped confinement and scampered back to the Oval Office.

After one top advisor asserted that Trump had gone to the Oval Office suite on Tuesday, despite being highly contagious, others insisted that Trump had stayed safely isolated in the second-floor residence. By Wednesday afternoon, Trump could no longer hold back, returning to the Resolute desk as he attempts to demonstrate virility to the public after three days in the hospital, and minimize the impact of the disease that has killed more than 211,000 Americans.

He was kept company by Mark Meadows, his chief of staff, and Dan Scavino, a top aide who often runs his Twitter account, a White House official said.

Most other top advisors and aides have fled the White House, either because they are infected and under quarantine at home, or worry they soon will be. Desks have been abandoned as workers in hazmat suits disinfect work spaces and scrub down surfaces. Television reporters who remained on the campus battled raccoons during their live shots.

“He’s now been fever-free for more than four days, symptom-free for over 24 hours, and has not needed nor received any supplemental oxygen” since Friday, when he was rushed to Walter Reed National Military Medical Center, Conley said.

But the president remains contagious, and anyone in close contact with him is supposed to wear a medical gown, gloves, mask and eye protection.

In addition to the president and First Lady Melania Trump, infections have spread rapidly at the White House, with at least 14 senior aides, staffers, Republican senators, journalists and others who have visited testing positive for coronavirus since last week.

The list includes boldfaced names like Press Secretary Kayleigh McEnany, one of Trump’s most prominent defenders on television, and Stephen Miller, his chief speechwriter and the architect of some of his most controversial policies on immigration.

It also includes Kellyanne Conway, who left her post recently as Trump’s chief counselor but returned last week to attend the formal introduction of Supreme Court nominee Amy Coney Barrett, who tested positive over the summer. The crowded Sept. 26 ceremony, which took place indoors as well as in the Rose Garden, is now seen as a possible super-spreader event.

With the election less than a month away, the world’s most famous coronavirus hot spot has reminded the nation that Trump’s promises that COVID-19 would disappear “like a miracle” were hollow, and that the virus continues to spread.

Trump tried to counter that reality with a carefully orchestrated thumbs-up return to the White House from the hospital on Monday, and a dramatic appearance on the Blue Room balcony in which he took off his mask, in an effort to suggest — falsely — that he and the country have beaten the pandemic.

The Centers for Disease Control and Prevention recommends people infected with COVID remain in isolation 10 to 20 days, depending on the severity of the case.

Meadows said earlier Wednesday that the president has been eager to leave his residence in the East Wing.

“If he decides to go the Oval, we’ve got safety protocols there that are not only from the [personal protective equipment] standpoint but from a ventilation standpoint in the Oval,” he said. Social distancing is mandated “as much as practical,” he added.

Until Trump went into the hospital on Friday, he and his top aides were dismissive of such safety protocols, seldom wearing masks in public and holding campaign rallies and events in numerous states, as well as gatherings in the White House.

Trump forced Secret Service agents to take him on a car ride Sunday while he was still a patient at Walter Reed. He wore a mask in the sealed car, as did the agents.

Trump’s doctors have said he tested positive last Thursday and was treated with drug therapies normally used for severe cases. They provided few details about the course of his disease or his treatment, however, and declined to say when he last received a negative test result.

Trump’s aides set up a working area in the residence in hopes he would stay put, as even supporters have warned him to take more precautions. But he clearly was restless.

Among more than 50 tweets he unleashed Wednesday morning, he thanked one supporter who offered to “wade though a sea of COVID infested water to vote for President Trump on November 3rd.”

Other Trump tweets, including one that called mail-in balloting “CORRUPT,” drew warning labels from Twitter for false or misleading content.