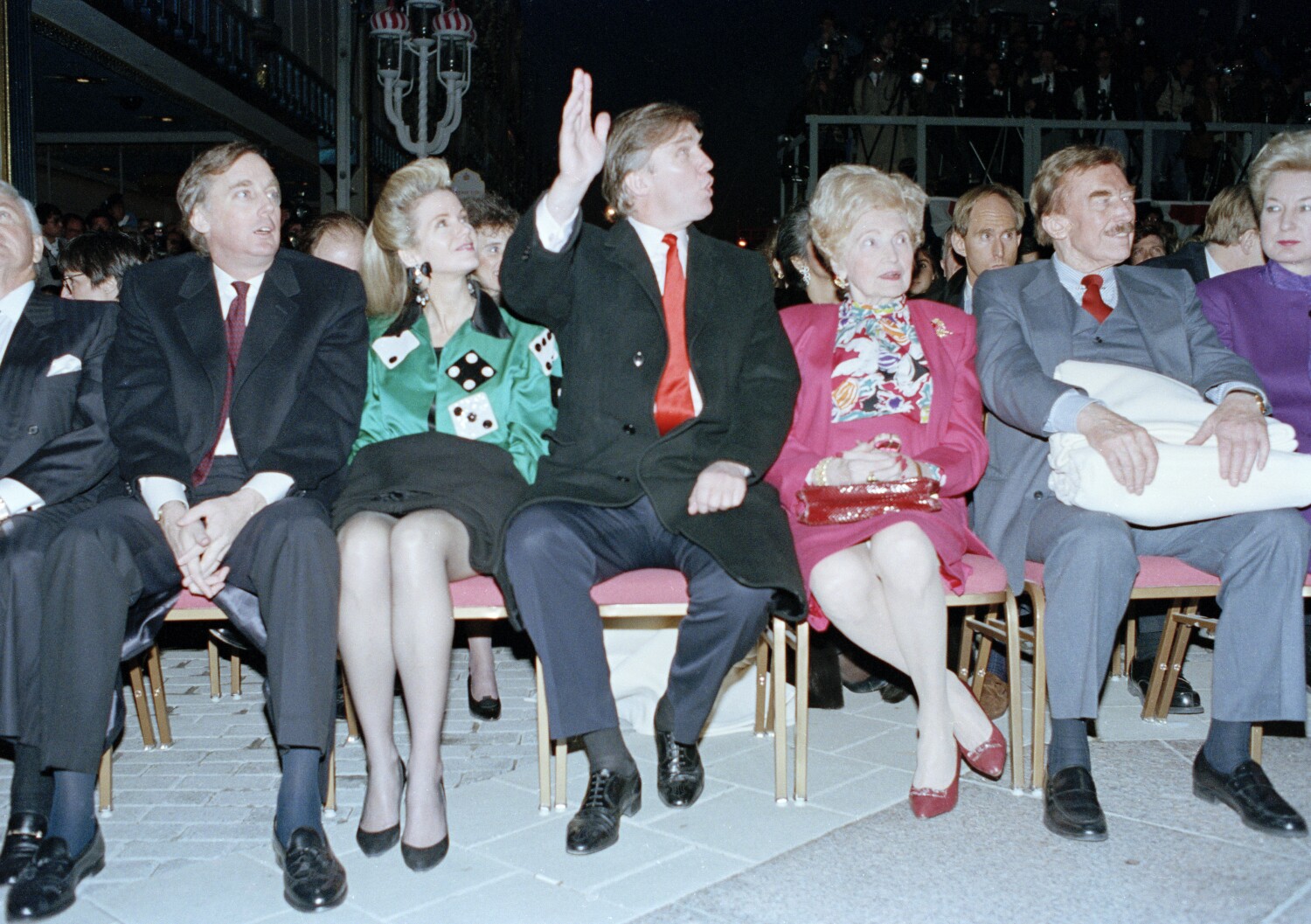 Donald Trump’s upbringing in a deeply dysfunctional family makes him a uniquely destructive and unstable leader for the country, his estranged niece writes in a scathing new book, perhaps the most personal in a series of deeply unflattering tell-all accounts about the president.

Mary Trump, a clinical psychologist, describes her uncle as deeply insecure and unscrupulous, saying he paid a friend to take his SAT so he could get into college. She accuses him of “twisted behaviors” and “cheating as a way of life,” citing a lifelong habit of lying.

“Donald is not simply weak, his ego is a fragile thing that must be bolstered every moment because he knows deep down that he is nothing of what he claims to be. He knows he has never been loved,” writes the 55-year-old daughter of the president’s eldest brother, Fred.

The Times obtained an early copy of her 240-page book, “Too Much and Never Enough: How My Family Created the World’s Most Dangerous Man.” It is scheduled to be released on July 14.

The book, which portrays the president as almost pitifully desperate for affirmation, provides a harsh contrast to Trump’s self-made image as a tough and successful businessman. It also represents an extraordinary breach in the wall of secrecy that he has erected around his life.

More than any modern president, Trump has gone to extraordinary lengths to conceal or distort major details of his private life, barring his schools from releasing transcripts, refusing to disclose his tax returns or detailed health information, and requiring employees and others to sign nondisclosure agreements to prevent release of unflattering material about his business and personal affairs.

The author says the president’s late father, Fred Sr., was domineering and a “high-functioning sociopath,” and his late mother, also named Mary, was “emotionally and physically absent.” They left Trump, she argues, without empathy and “fundamentally incapable of acknowledging the suffering of others.”

“Honest work was never demanded of him, and no matter how badly he failed, he was rewarded in ways that are almost unfathomable,” she writes.

“Now the stakes are far higher than they’ve ever been before; they are literally life and death. Unlike any previous time in his life, Donald’s failings cannot be hidden or ignored because they threaten us all,” she adds.

Although the president’s family sued to try to block release of the brutal personal account, a New York appeals court ruled that publisher Simon & Schuster may distribute the book.

It remains the focus of a legal battle, however. Trump, the fourth of five siblings, argues that in writing the book, his niece violated a nondisclosure agreement that she signed two decades ago as part of the settlement of a bitter dispute over the family fortune.

She has told the court that Trump lied about his net worth and other business affairs during the negotiations and that the confidentiality agreement should be declared invalid.

Sarah Matthews, a White House deputy press secretary, said the allegation that Trump paid someone to take the College Board admissions test for him “is completely false.” Trump enrolled at Fordham University in 1964 but transferred two years later to the Wharton School at the University of Pennsylvania, graduating with a bachelor’s degree in business.

Matthews also said “the president describes the relationship he had with his father as warm and said his father was very good to him.”

According to the book, the Trump family was caustic, cold and calculating.

“Donald suffered deprivations that would scar him for life,” Mary writes, and he developed personality traits that included “displays of narcissism, bullying, grandiosity.”

He also became practiced at bending the truth, a precursor to becoming a president who has uttered and tweeted thousands of falsehoods since taking office.

“For Donald, lying was primarily a mode of self-aggrandizement meant to convince other people he was better than he actually was,” Mary writes.

According to her account, Trump got his older sister, Maryanne, to complete his school homework, and he paid a friend to take his College Board admissions test.

“That was much easier to pull off in the days before photo IDs and computerized records,” Mary writes. “Donald, who never lacked for funds, paid his buddy well.”

Mary Trump relies on her training as a clinical psychologist to analyze the president. She blames him for the unraveling of her father, Fred Jr., who died in 1981 at age 42 after struggling with alcoholism.

Fred Jr., often called Freddy, had been expected to take over the family real estate business, but he was uninterested, and Fred Sr. ended up favoring Donald instead.

“Donald, following the lead of my grandfather and with the complicity, silence, and inaction of his siblings, destroyed my father,” Mary writes.

Freddy became a commercial airline pilot, disappointing his father, who described him as a “bus driver in the sky.” While Fred Jr. was living in Massachusetts with his wife, Donald visited and berated him for his alleged failings.

“You know, Dad’s really sick of you wasting your life,” Donald said, according to the book.

Fred Jr.’s drinking worsened, and an attempt to return to the family business didn’t pan out. At the end of his life, no family members accompanied him when he was taken to the hospital, Mary writes. She says Donald went to the movies the night his brother died.

According to the book, Trump internalized Fred Sr.’s treatment of Freddy.

“He had plenty of time to learn from watching Fred humiliate his older brother and Freddy’s resulting shame,” Mary writes. “The lesson he learned, at its simplest, was that it was wrong to be like Freddy: Fred didn’t respect his oldest son, so neither would Donald. Fred thought Freddy was weak, and therefore so did Donald.”

Trump, not known for introspection, has expressed rare doubts about his treatment of his older brother. “I do regret having put pressure on him,” he told the Washington Post last year.

After Fred Sr. died in 1999, Mary and her brother, known as Fritz, were angered to learn that they would inherit far less than they expected. When they challenged the will, the Trump family cut off their medical insurance — a devastating blow to Fritz, whose new son was born with cerebral palsy and needed constant care.

Mary and Fritz eventually settled for less money than they felt they were entitled to, but the legal sparring had consequences down the road.

In the book, Mary reveals herself as the key source for the New York Times’ investigation into Trump’s alleged tax fraud as he inherited his father’s real estate empire. She communicated with one of the reporters using an untraceable phone and visited her former lawyer’s office to collect computer files and nineteen boxes of documents.

The book also describes unflattering comments made by Maryanne, Trump’s older sister and a retired federal judge. When he announced he was running for president, Mary writes, Maryanne dismissed him as “a clown.” And when he started to build support among evangelical voters, she was outraged.

“The only time Donald went to church was when the cameras were there,” Maryanne said, according to the book. “It’s mind boggling. He has no principles. None!”

Trump’s well-documented lewdness extends to his interactions with his niece, she says. After asking Mary to help ghost write one of his books, he refused to grant an interview but provided her with “an aggrieved compendium of women he had expected to date but who, having refused him, were suddenly the worst, ugliest, and fattest slobs he’d ever met.”

Around that time, Mary went with her uncle to Mar-a-Lago, his Florida resort. She writes that when he spotted her in a bathing suit, the future president looked at his 29-year-old niece “as if he’d never really seen me before” and told her “you’re stacked!”

Several former senior members of Trump’s inner circle have also shared withering criticism of the president as he seeks reelection.

Election 2020: Here are the recount rules in closest states

Trump bounces attacks on coronavirus and more back at foes