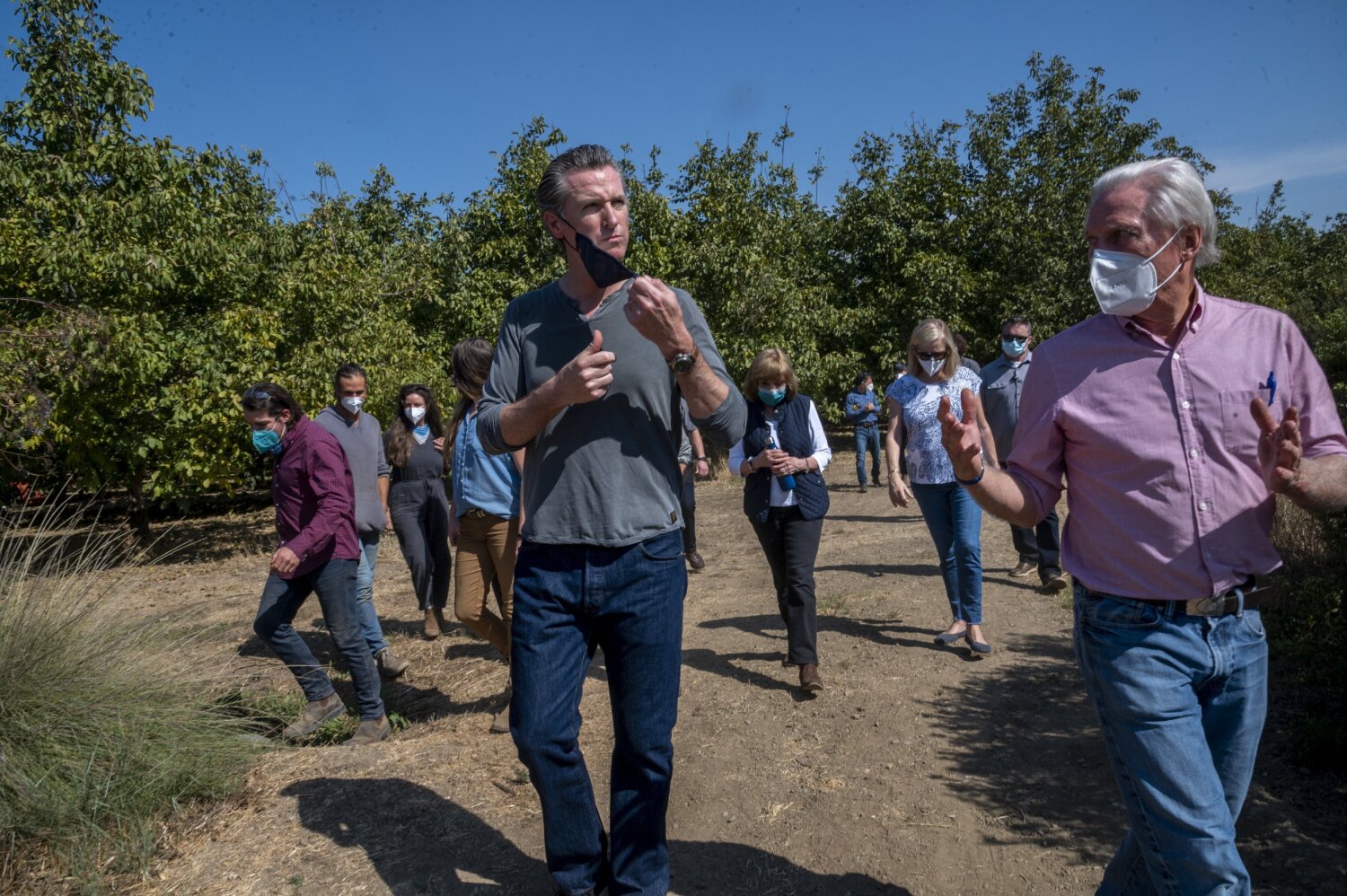 Now we get it: Gov. Gavin Newsom was first inspired to fight climate change and protect the environment by his childhood pet — Potter, the river otter.

Some of us thought Gov. Jerry Brown was a bit strange. But he didn’t cozy up to a river otter as a little kid. Nor was Brown particularly concerned about insects — at least that we know about. Newsom was and is.

Newsom told reporters about his early introduction to environmental causes last week while unveiling yet another executive order — this one to protect 30% of California’s land and coastal waters in their semi-natural state by 2030.

Not only would that help threatened animals, fish and wildlands, the governor said, but it would also slow global warming by absorbing carbon from the atmosphere.

Give Newsom credit. It’s a noble and lofty goal. And probably achievable.

Too bad a forward-looking governor didn’t commit to that a century ago, before California became overrun with people, sickened by pollution and set ablaze by flammable wildlands. It’s not all the fault of climate change.

California has lost 95% of its wetlands since the early 1900s.

“It’s incredible, the loss of wetlands in the Central Valley,” says Wade Crowfoot, secretary of the California Natural Resources Agency. There have been successful efforts in the last 30 years to save what’s left, he says.

“That’s exciting. And it’s what we want to do more of — to stem that loss and maybe add some back.”

Back to Newsom’s early environmental training:

The governor’s grandfather on his mother’s side, Arthur Menzies, who was imprisoned by the Japanese on Corregidor Island during World War II, returned “with one mindset,” Newsom said, “and that was a focus on California native plants. There’s a wonderful Menzies garden in the Bay Area.”

His grandfather “studied for decades — native plants and native species” of California, Newsom said. “I’ve always shared a little bit of that bias.”

“My first pet when I was a young child [was] a river otter,” Newsom said. “Some people have dogs and cats. I had a river otter — Potter the Otter.

Last year, Newsom regaled a second-grade class in the fire-ravaged Sacramento Valley town of Paradise with a story about his pet otter.

“I’d get cozy with it,” he told the 7- and 8-year-olds, Times staff writer Taryn Luna reported. Potter slept curled up on little Gavin’s bed.

During the school visit, Newsom told reporters that his parents argued about Potter’s place in the family.

“There was the moment where the otter bit the mailman, and my mother said to my father, ‘It is either your son and daughter, or your damn otter,’” Newsom recalled. The governor jokingly added that Potter may have been “one of the reasons for the divorce.”

Shortly afterward, the governor’s office tapped out a tongue-in-cheek tweet with an otter image asserting: “My friends and I should not have to live in fear of being trapped and our fur being sold.”

So, California’s governor clearly has been strongly influenced by his grandfather, dad and pet otter.

Newsom’s latest environmental effort is called a “30 by 30” plan — part of a worldwide effort to protect 30% of Earth by 2030. Thirty-eight countries have signed on. California is the first state to do so.

Newsom, announcing his executive order in a Yolo County walnut orchard, said: “California, as the fifth-largest economy in the world, needs to flex its muscles, needs to assert itself and to advance that cause — not only as it relates to its global impacts, but hopefully [to] jump-start similar efforts in other states.”

The reason Newsom’s goal seems achievable is because 22% of California’s land and 16% of its coastal waters are already protected, state officials say.

Governments — federal, state and local — own 53% of California. Newsom’s order directs state agencies to work with other governments and private landowners to devise ways to protect animals, plants, water and soil — and improve wildland management to guard against fires.

State Agriculture Secretary Karen Ross says: “We’re really at a unique point of time…. A lot of young farmers coming back [to family farms], who are in the third and fourth generations, are excited about trying to figure this out. They’re saying, ‘I’m a carbon farmer and an almond farmer.’”

Newsom’s goal is to change habits through voluntary cooperation — not by legal mandate. New laws would require the Legislature to pass bills. And that would get entangled in politics.

That’s why Newsom’s recently announced effort to ban the sale of new gas-powered automobiles by 2035 seems problematic. He will be long gone as governor by then, his executive order could be rescinded by a successor, and the Legislature surely would need to approve such a dramatic change in California car culture.

With his simpler “30 by 30” order, Newsom is hoping to gather all the leery interests around a campfire and lead them in a chorus of Kumbaya.

We all should sing a toast to Potter.

President Donald Trump’s penchant for pretending he was “just kidding” after receiving backlash for an outrageous statement is laid bare in a damning new montage. Trump asks Russia for help, encourages police brutality and ponders […]