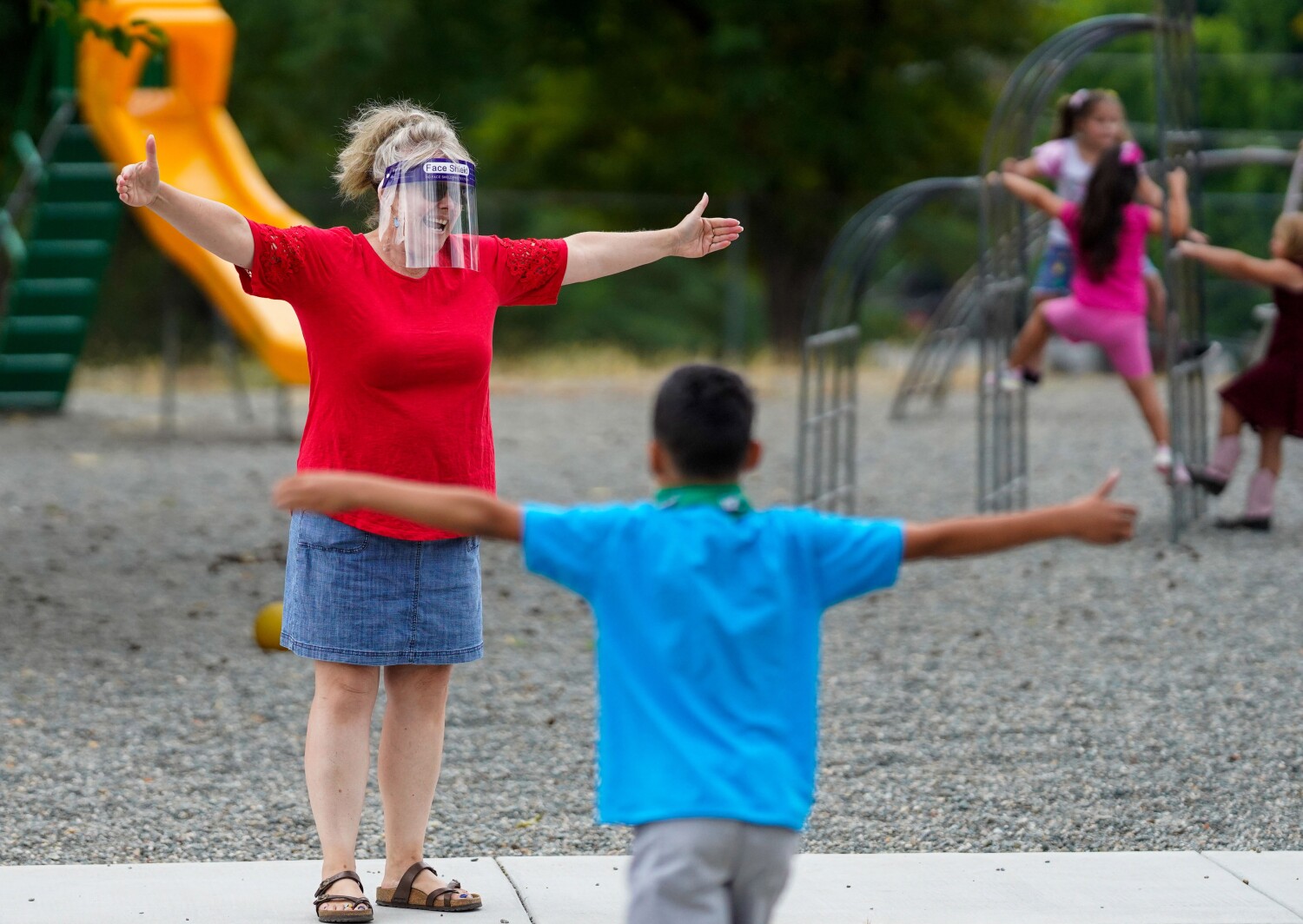 Gov. Gavin Newsom on Wednesday announced a $2-billion package of financial incentives to encourage a return to in-person classroom instruction for California elementary students as early as mid-February, an effort that would fund frequent coronavirus testing for students, teachers and staff.

The proposal won’t immediately open any additional school campuses, given the bleak public health conditions across most of the state, and it remains unclear just how quickly many districts will qualify, especially those in large urban areas in Southern California and the San Francisco Bay Area.

San Diego County’s COVID-19 rate is currently too high to qualify. San Diego Unified, the state’s second-largest school district, has kept its schools closed and provided virtual instruction for most students since March.

San Diego Unified Board President Richard Barrera said Wednesday that while he’s pleased that Newsom’s plan includes funding for COVID-19 school testing, the proposal, if passed, would not automatically mean the district can reopen soon, even if San Diego County lowers its COVID-19 rate enough to qualify.

First of all, San Diego Unified will want to know when teachers will be able to get vaccinated, Barrera said.

Newsom said teachers will be prioritized for vaccinations but, as of Wednesday morning, there was no specific timeline.

“We think if there’s a possibility over the next six weeks we get all educators who would be on campus vaccinated, that will make a big difference in our ability to open up and stay open,” Barrera said in an interview.

Barrera said he also doesn’t know if the funding in Newsom’s plan will be enough for schools to fund the level of COVID-19 testing Newsom is recommending, which is as frequent as once a week for all students and staff in areas with high case rates.

And finally, San Diego Unified will likely re-evaluate with experts at UC San Diego what it considers to be a safe COVID-19 community case rate to reopen, Barrera said.

Before Newsom’s announcement Wednesday, the state was not allowing schools to reopen if their county has a daily new case rate of more than 7 per 100,000 residents —that’s the standard San Diego Unified was adhering to for reopening. With Newsom’s announcement, schools can now reopen if their county has a case rate of fewer than 28.

“These numbers can and, certainly have, felt to us for some time arbitrary,” Barrera said.

In his announcement, Newsom said there is growing evidence that young students faced “decreased risks” associated with the coronavirus and benefited more from in-person instruction compared to at-home learning.

“As a father of four, I know firsthand what parents, educators and pediatricians continue to say: In-person is the best setting to meet not only the learning needs, but the mental health and social-emotional needs of our kids,” Newsom said in a statement. “In the midst of this pandemic, my administration is focused on getting students back into the classroom in a way that leads with student and teacher health.”

Parents will still have the option to keep their children learning from home, even if their local schools reopen.

Newsom’s plan, expected to be submitted to the Legislature as an adjustment of the state budget for the current fiscal year, prioritizes returning students in kindergarten through the second grade to the classroom as well as those with special instructional needs.

The remainder of elementary school students could return as early as sometime in March. It remained unclear when older students would return to campuses.

All school staff and students who return to school would be required to wear masks.

Although the Newsom administration will support COVID-19 testing of teachers, staff and students, the governor’s plan does not appear to mandate testing.

Newsom said schools in counties with a seven-day average of fewer than 28 coronavirus cases per 100,000 residents would be eligible to open — a threshold that allows some schools in purple tier regions to resume in-person classes.

Los Angeles County and many other urban areas are experiencing far higher rates of transmission and would not be expected to reopen for some time.
In San Diego County, schools that are still closed will not qualify to reopen because the county’s current case rate is 38.1 per 100,000 residents.

Most San Diego County school districts have already been open for in-person instruction. Schools that reopened before San Diego fell to the purple tier on Nov. 10 can remain open. Before Newsom’s announcement, closed schools had to wait for the county to get and stay out of the purple tier for two weeks before reopening.

San Diego Unified had announced in early December that it will release a new reopening timeline on Jan. 13. Before the current COVID-19 surge, the district had planned to reopen for elementary students on Monday and for middle and high school students on Jan. 25.

In a joint statement Wednesday made by superintendents of seven large California school districts, including San Diego Superintendent Cindy Marten, the school leaders said they will analyze Newsom’s proposal and provide feedback to Newsom and legislators “to make sure the guidelines address the needs of students and families served by large, urban districts across the state.”

The superintendents said they will publish a response before the state legislature reconvenes on Jan. 11.

Education advocates may be particularly worried about the details of how the plan is funded. The proposal includes the $2 billion as part of the funding guaranteed to schools under the California Constitution — which means the money for coronavirus testing and other needs would otherwise be spent on a variety of existing school programs.

Under Newsom’s plan, districts that offer in-person instruction would receive about $450 per student, a figure that could increase for those from low-income families, English learners and foster youth.

In November, superintendents from some of California’s largest school districts — including Los Angeles Unified and San Diego Unified — sent a letter to Newsom urging him to establish common statewide standards for school reopenings, including testing requirements, social distancing criteria and employee protections.

The governor’s most notable decision on when to resume in-person learning, unveiled in July, still left the final decision in the hands of individual school districts as virus transmissions decreased in a number of California communities in early fall.

Critics said the result was an ever-widening gap between schools with resources, largely in affluent communities, and those serving lower-income families and left to full-time remote learning. Those criticisms also noted that a number of private schools were the ones to open first and have been allowed to remain open even as local public health conditions have worsened.

Earlier this month, a group of prominent Democrats in the Legislature demanded a plan that would tightly link the return of in-person learning with reduced local virus transmissions. Legislation introduced earlier this month would require school districts to open campuses in California counties that had been removed from the most restrictive “purple” tier of COVID-19 protections. Current policy makes it optional for schools to reopen in the less restrictive tiers.

The funds for the new effort will be included in Newsom’s budget proposal for the coming year, to be unveiled next week. Legislative analysts and the governor have estimated a large windfall of tax revenue — of $15.5 billion or more — resulting from a smaller than expected drop in personal income taxes paid by Californians. Some of the surprise revenue will, under longstanding rules, automatically be spent on public schools, but lawmakers could add more cash to that total in support of the governor’s proposal and other efforts.

Disband the police? Camden already did that

U.S. rushes to the exits in Afghanistan, and the Taliban surges