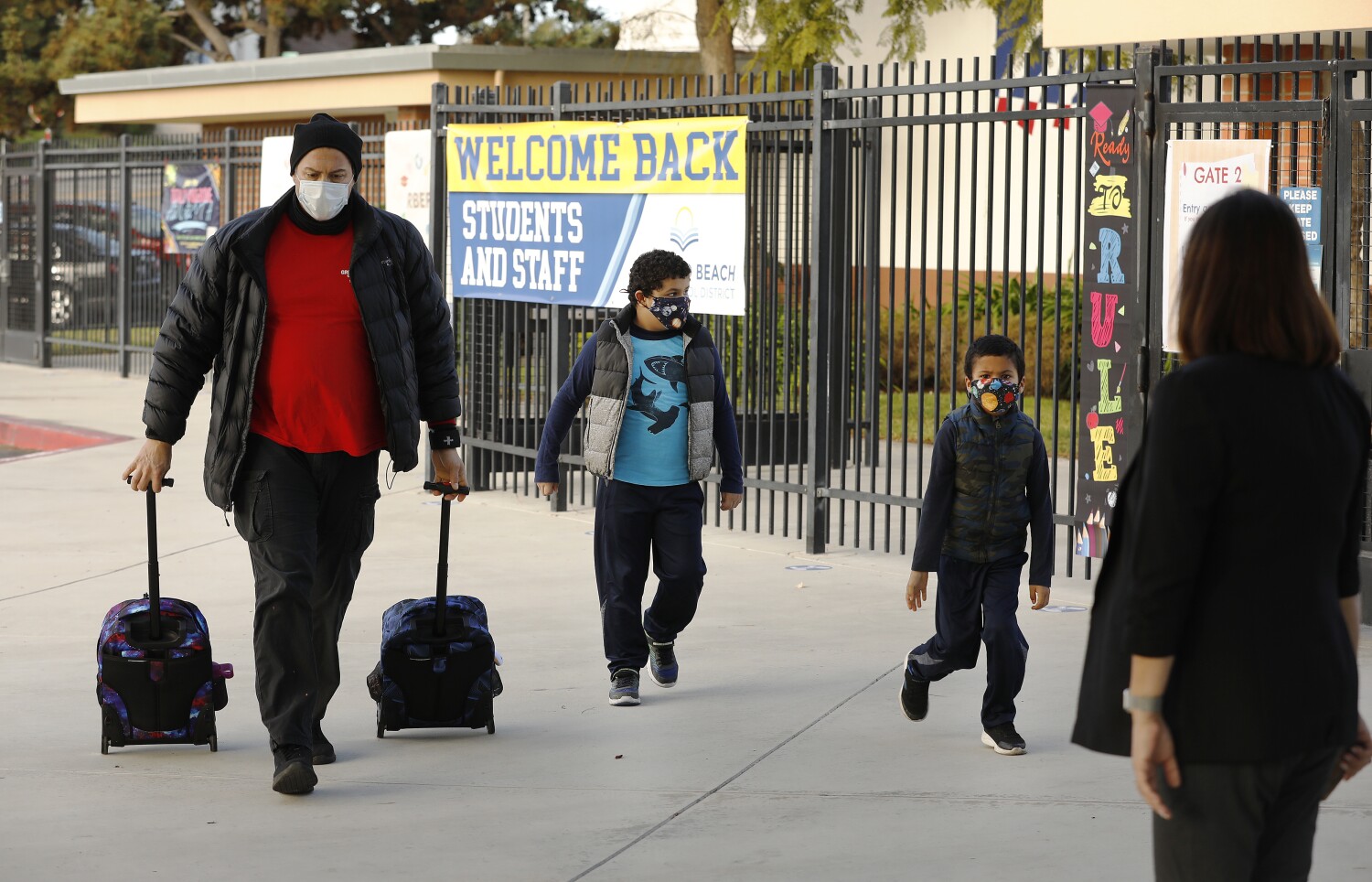 Gov. Gavin Newsom on Thursday criticized a $6.6-billion legislative proposal to begin opening more elementary campuses in April, a plan he said fell short as negotiations between him and lawmakers have so far failed to result in a compromise.

The legislative proposal would require county health departments to make COVID-19 vaccinations available to school employees who will work on campus, but does not explicitly say doses would be offered to staff before in-person learning resumes — a sequence pushed by the California Teachers Assn.

Newsom has repeatedly argued against guaranteed vaccinations for teachers before in-person education resumes, saying the state does not currently have enough supply to inoculate teachers without making older and vulnerable Californians move further down the priority list.

By formally filing the plan in both the Senate and Assembly on Thursday, Assemblyman Phil Ting (D-San Francisco) told reporters that lawmakers set the stage for a vote as early as Monday. That could put Newsom in the uncomfortable situation of deciding to backtrack on his own schools proposal or reject the bill and possibly delay elementary school reopenings until even later in the academic year.

“While the Legislature’s proposal represents a step in the right direction, it doesn’t go far enough or fast enough,” Newsom said in a statement. “I look forward to building on the growing momentum to get our schools open and continuing discussions with the Legislature to get our kids back in school as safely and quickly as possible.”

“Here are two truths — California’s students need to get back in the classroom, and there is no easy solution to getting them there in the midst of the pandemic,” Atkins said in a statement. “These bills move us closer, and build on the governor’s framework based on feedback that we’ve heard from parents, students, and school employees, including teachers.”

A spokeswoman for the California Teachers Assn. said the union is still reviewing the details.

“We do appreciate the legislative proposal in prioritizing safety in opening schools for in-person instruction,” said Claudia Briggs, a CTA spokeswoman.

The proposal from Democratic legislators blends aspects of the California Department of Public Health’s existing school guidelines with portions of the governor’s Dec. 30 reopening proposal and a pending Assembly bill intended to speed up the return to in-person education.

“It provides a plan and it provides funding — both for safe school opening and for extra attention to learning recovery,” Assembly Speaker Anthony Rendon (D-Lakewood) said in a written statement. “We need to make up for what students have missed without in-person instruction.”

Elementary schools that open by April 15 would be eligible for a portion of $2 billion in state education funds earmarked for safety efforts. School districts would be ineligible if their campuses don’t offer in-person elementary instruction once local COVID-19 cases fall to seven per 100,000 residents in the county. All schools, including those that won’t open in the next few weeks, would be required to file COVID-19 safety plans by April 1.

Legislators said no schools that are currently open or scheduled to open would be required to close. And parents at schools that open would still be able to request that their children continue to be taught remotely.

The legislative proposal provides an additional $4.6 billion to help schools develop programs to address learning loss during the pandemic. It also assumes some programs will be subsidized by $6 billion of previously approved federal aid.

The debate over reopening California schools has hovered over the state’s response to the COVID-19 pandemic for months, fracturing Newsom’s relationship with CTA, one of the most powerful teachers unions in the nation.

Despite his claims this month that he was very close to a deal with lawmakers, legislative sources told The Times the governor has continued to push for a wider reopening of elementary schools in purple tier counties, which are subject to the state’s most restrictive rules.

Newsom has insisted that vaccines are not necessary to reopen schools, pointing to guidance from the federal Centers for Disease Control and Prevention that says schools can resume in-person education with proper precautions in place.

On Thursday, Newsom doubled down on his own reopening proposal “to accelerate and support school reopenings for our youngest students — as safely and quickly as possible,” which he said the Legislature has had “since the first week of the year.”

The governor has repeatedly argued that the state has already prioritized school staff in its vaccination guidelines, though they provide no assurances that educators will be inoculated before they arrive back on campus.

The Legislature’s plan says counties “shall make COVID-19 vaccines available to school site personnel who are working at a school site where pupils are attending in person,” but it does not specify when that would happen.

School districts that reopen for in-person education would be required to reach a collective bargaining agreement with employee unions or provide evidence of a memorandum of understanding that supports their school safety plan by April 1, which may provide an opportunity for unions to negotiate access to vaccinations before their members return.

Advocates estimate that fewer than 400,000 school staff would return to the classroom when transitional kindergarten through sixth-grade classes resume. On Wednesday, the governor detailed the federal government’s plan to deliver more than 1 million COVID-19 vaccine doses per week to the state through the end of the month.

Assemblyman Patrick O’Donnell (D-Long Beach), a former teacher who chairs the lower house’s education committee, said the governor could prioritize teachers now if he wanted to.

“I think we’ve all witnessed over the last several weeks-plus certain groups being slid in in front of teachers,” he said.

Some communities, such as Long Beach and Sacramento, have committed to vaccinating teachers now, while others have said they do not have the supply to move beyond inoculating those 65 and older.

After the Legislature unveiled its plan, the California County Superintendents Educational Services Assn. said no deal is better than plans that establish new hurdles.

“The reality for most schools is they are open, near reopening or not even close,” said Derick Lennox, senior director of governmental affairs for the association. “Creating new obstacles around testing and collective bargaining won’t change the trajectory around reopening.”

In some ways, the negotiations between Newsom and lawmakers have been outpaced by improving public health conditions across California. As of Tuesday, case rates in 47 of the state’s 58 counties had fallen to levels allowing some level of classroom instruction — though a number of local school employee unions, insistent on access to vaccinations, had not agreed for their members to return to campus.

Ariel Pink complains to Tucker Carlson: “People are so mean”