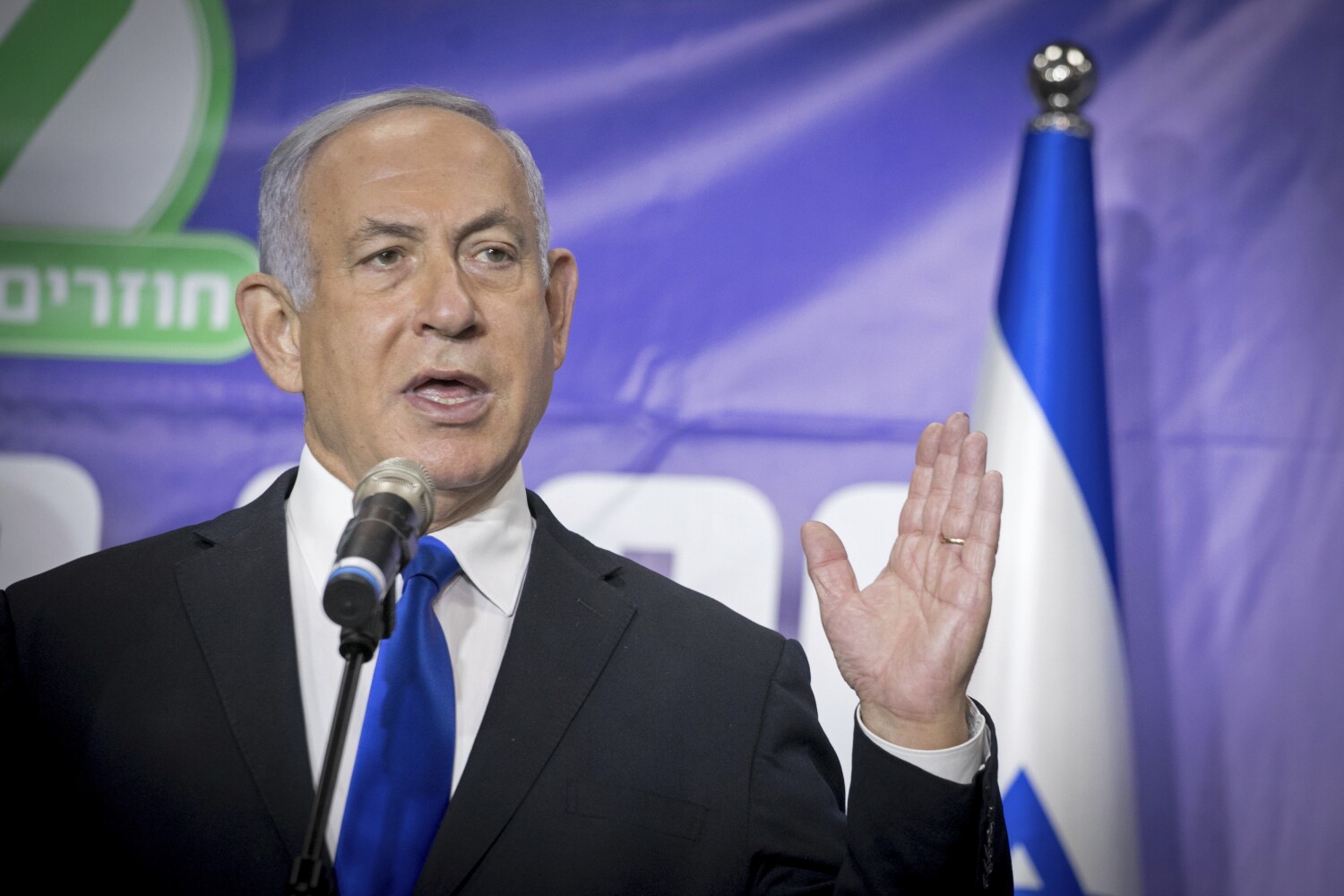 When America’s top diplomat came to Israel late last month, one meeting was more discreet than all the rest.

No journalists and only a handful of aides were invited to observe Secretary of State Antony J. Blinken’s encounter with a centrist Israeli politician named Yair Lapid in the nighttime hours of May 25 at a Jerusalem hotel. It was a delicate moment in Israeli political history, as Lapid worked to form a prospective new government that would exclude Prime Minister Benjamin Netanyahu.

Just eight days later, Lapid would galvanize Israel with formal word that he had put together a coalition of Netayahu rivals from across the political spectrum in a bid to topple the country’s longest-serving prime minister, who is on trial on corruption charges.

The Biden administration says it will work with any Israeli government, maintaining the “ironclad” bond Washington has long had with Israel. But many U.S. officials would scarcely be sorry to see Netanyahu go, after his extraordinarily friendly alliance with former President Trump pushed Israel closer to the GOP camp, complicating what had always been a bipartisan policy relationship.

Netanyahu, however, is not going quietly, making not-so-subtle swipes at President Biden that could further roil the relationship, especially as Washington seeks to revive a landmark nuclear accord with Israel’s sworn enemy Iran.

With his prospects for keeping his job diminishing by the hour, the Israeli leader this week told senior members of Israel’s security establishment that he would willingly defy the U.S. administration to defend Israel.

Speaking Tuesday at a ceremony for the new head of Israel’s Mossad spy agency, Netanyahu asserted that if a move against Iran were deemed necessary to protect Israelis, that would decisively outweigh any concerns about “friction” with the United States.

Israel, the prime minister added, would do “everything — I mean everything” — to ensure that Iran does not acquire nuclear weapons.

As the coalition opposing Netanyahu took shape in earnest, with right-wing religious nationalist Naftali Bennett announcing Sunday he would join forces with Lapid, the Israeli leader further raised eyebrows by appearing to paint Washington as a less-than-reliable ally.

After Bennett’s declaration, Netanyahu unleashed an angry speech that almost seemed to draw a comparison between the United States and two of Israel’s bitter foes, Iran and the Palestinian militant group Hamas.

The recent fighting between Israelis and Palestinian militants had already put Biden in a difficult spot with the progressive wing of his own Democratic Party, with some lawmakers urging the president to lean much harder on Netanyahu to agree to a cease-fire.

If Bennett takes office as prime minister, his past incendiary remarks, including bragging about killing Arabs during his military service, are likely to get even more negative social media attention than they already have from supporters of the Palestinian cause. That will make it more politically costly for Biden to express unqualified support for Israel’s right to self-defense.

And to Biden’s domestic political right, there are figures who also seem determined to stir the pot. In recent days, Netanyahu warmly welcomed two staunch Trump allies, Republican Sens. Lindsey Graham of South Carolina and Ted Cruz of Texas. Cruz used his visit as a forum to attack what he called Biden’s weakness on Hamas.

There is little reason to think that the close U.S.-Israeli relationship will change significantly whether or not Netanyahu loses his perch in coming days — just as its broad parameters remained in place when Trump left office after four years of tightly embracing the right-wing Israeli leader, often at the expense of Palestinian interests.

“We will work with any Israeli government going forward as we have in the past,” Blinken said in an interview with CNN en Español during a swing through Central America last week.

Even so, an interlude during which a wounded Netanyahu struggles to retain power could prove perilous, analysts say. A national crisis, whatever its form, could derail the coalition’s effort to oust Netanyahu, a colossus of the country’s political scene for a generation.

“The extraordinary political developments will generate acutely tense days throughout the coming week,” Amos Harel, an expert on defense issues, wrote in the Israeli newspaper Haaretz on Friday. “It’s impossible to ignore the security dangers, both externally and domestically, that loom as long as a [new] government hasn’t been sworn in.”

The prospective installation of a new, hard-line Israeli leader — Bennett is a booster of Jewish settlements and a proponent of annexing chunks of the West Bank — could also pose complications for Washington.

But Bennett, who would take first turn in a rotation of the prime minister’s job with Lapid, would be accountable to the diverse coalition backing him, rather than leading a right-wing parliamentary bloc. For that reason, analysts say, he is unlikely to try to advance a hard-right agenda regarding the Palestinians, concentrating instead on bread-and-butter issues like healthcare and the economy.

After Netanyahu’s Iran outburst on Tuesday, Defense Minister Benny Gantz, who has joined forces with the new coalition, quickly jumped in to emphasize that the United States is Israel’s closest ally. By Thursday, Gantz was in Washington on a previously scheduled visit, offering up effusive praise for Biden and the American friendship with Israel.

The parliamentary vote that could result in Netanyahu’s ouster is probably a week or more away. But as many commentators have noted, a week is an eternity in Israeli politics.

“An hour in this country can change a lot of things,” said Yonatan Freeman, a politics professor at Hebrew University.

In Israel, there is plenty of precedent for a shooting war relegating internal political disputes to the sidelines. Brief but ferocious hostilities last month between Israel and Hamas, an 11-day bout of fighting that killed more than 250 Palestinians in the Gaza Strip and 12 people on the Israeli side, temporarily halted rivals’ efforts to cobble together an anti-Netanyahu coalition.

Bennett returned to the bargaining table with Lapid only after the cease-fire with Hamas was sealed on May 21, leaving a window of less than two weeks to clinch a complicated eight-party effort to jointly challenge Netanyahu.

By the time Blinken came to Jerusalem, the coalition-building effort had the potential to pose a genuine threat to the prime minister. Lapid made a point of sharing a photograph of his brief meeting with the U.S. secretary of State on social media.

Israeli commentators interpreted talks by the two as a sign that the Biden administration recognized the possibility of a change of leadership. But even after Lapid formally informed President Reuven Rivlin on Wednesday that he had secured the backing of a parliamentary majority, State Department spokesman Ned Price said the administration would not comment on any prospective Israeli government before it was inaugurated.

When Biden took office, he lost no time in announcing he aimed to revive the Obama-era Iran nuclear pact that Trump had torpedoed. In the intervening months, Netanyahu has made moves that could make it harder to restart those negotiations. Israel broadly hinted it had carried out a massive cyberattack on Iran’s main uranium-enrichment facility in April — when U.S. Defense Secretary Lloyd J. Austin III was visiting Tel Aviv.

Gantz, in Washington on Thursday, seemed to rebuke Netanyahu’s public displays of pique over U.S.-Israeli disagreements on Iran.

“We will continue this important strategic dialogue in private discussion,” he said. “And by that manner only, not in the media, in a provoking way.”

King reported from Tel Aviv and Wilkinson from Washington and Jerusalem.

WASHINGTON (AP) — Joe Biden’s search for a running mate is entering a second round of vetting for a dwindling list of potential vice presidential nominees, with several Black women in strong contention. Democrats with […]

In a win for California’s struggling cannabis industry, a Fresno judge has dismissed a lawsuit by 24 cities seeking to invalidate state regulations allowing delivery of cannabis to homes in communities that have outlawed sales […]

Former President Donald Trump on Saturday pushed Republicans to support those candidates who share his values in next year’s midterm elections as he launched a new more active phase of his post presidency. The former […]