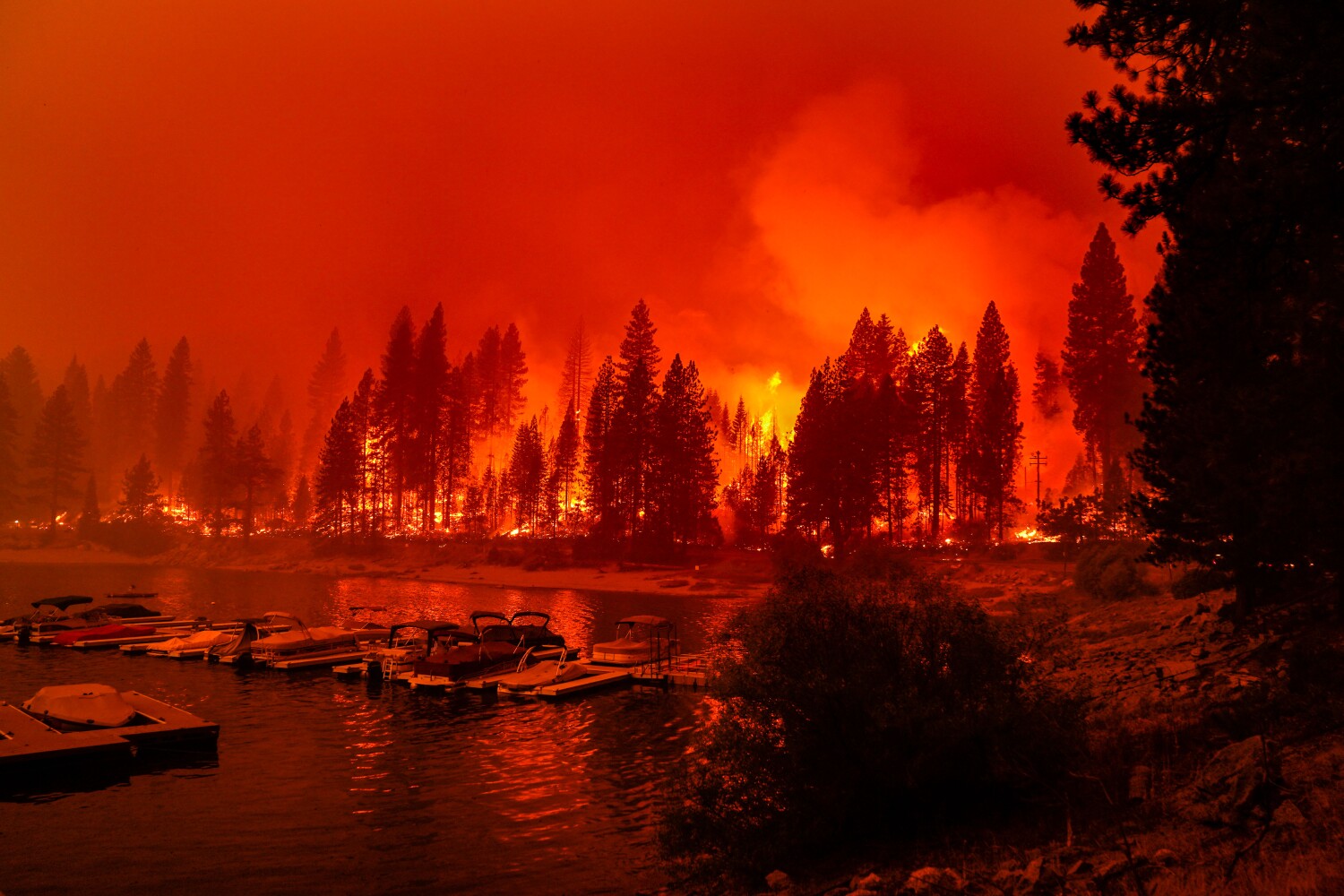 The West Coast had just experienced a record-shattering heat wave when news came last week of a rare late-summer snowstorm in Colorado. To those still sweltering in California, Oregon and Washington, it sounded like a dream come true. In fact, it was an omen of a greater disaster to come.

As the blast of cold air in the Rocky Mountains sank, it searched for an escape — the lands of hotter weather farther west, toward the Pacific Coast. That triggered furious winds that poured over the Sierra Nevada and Cascade mountain ranges, acting as a giant bellows over the entire Pacific Coast, where fires were already burning in crackling-dry brush and timber.

The result: an epic firestorm hopscotching from the Mexican to Canadian borders that has killed dozens of people, wiped out entire towns and caused some of the worst air pollution ever seen in the region.

For California, it’s the second time in a month that a host of unfortunate weather conditions have aligned in a way that has fueled a spread of wildfires at record speed. The rapid spread of fire was worsened in part by climate change, which not only makes temperatures hotter, but also is blamed by some scientists for causing dry periods to get drier while wet periods get wetter, making vegetation even more ripe for kindling.

In Oregon, too, where at least 10 have died and officials prepare for a “mass fatality incident” as they search for the missing, there was no precedent in the modern record for the sheer number and scale of the wildfires. The fires in Washington have been the second worst in that state’s history.

California last broke its record for its largest wildfire season just two years ago, when more than 1.8 million acres burned.

The unprecedented nature of the current fires has its origins in the extreme cold that began hitting the Rockies on Labor Day. It caused cold air to sink, increasing air pressure at the surface; at the same time, the heat on the West Coast caused hot air to rise, lowering air pressure at the ground, according to Rebecca Muessle, meteorologist with the National Weather Service office in Portland, Ore.

And since winds flow from areas of high pressure to areas of low pressure, that sent powerful winds screaming from the east to the west.

Many Californians know these downslope wind events as Santa Anas or Diablos; Oregon and Washington forecasters call them offshore wind events or east winds. Whatever its name, the wind event last week “was particularly strong — much stronger than the usual offshore wind event,” said meteorologist Connie Clarstrom of the National Weather Service office in Medford, Ore. “That’s a very rare occurrence to see winds as strong as we had in that case.”

East-west valleys and canyons that channeled winds from the east transformed into blowtorches for wildfires.

In southern Oregon, gusts of up to 45 mph whipped into Jackson County’s Rogue Valley from the Cascade Mountains, spreading the Almeda fire, flattening the towns of Phoenix and Talent southeast of Medford, leaving at least four dead and one missing. A 41-year-old man, Michael Jarrod Bakkela, has been arrested on suspicion of arson.

Southeast of the state capital of Salem, homes along the Santiam Canyon burned, resulting in at least four fatalities in Marion County — including the deaths of a 13-year-old boy and his 71-year-old grandmother in the town of Lyons — and 10 missing people. The Beachie Creek fire had initially been small — fewer than 500 acres — and had been burning since Aug. 16. Only when the historic wind event began did the fire grow overnight to more than 131,000 acres. East of Eugene, Ore., the Holiday Farm fire in Lane County that charred the McKenzie River Valley has claimed at least one life in the town of Vida and razed sections of the town of Blue River.
On the northern edge of California, gusts of 63 mph hit the Slater fire in Siskiyou County; two people died in the community of Happy Camp along the Klamath River in the Klamath National Forest, and 150 homes were destroyed.

In California, the difference in air pressure on either side of the Sierra Nevada sent gusts of up to 60 mph screaming through gaps in the state’s greatest mountain range. That whipped up what had been the dying Bear fire — part of the North Complex fire zone in Butte, Plumas and Yuba counties — to begin spreading at an astonishing rate of 2,000 acres an hour.

“When we get that downslope wind, it’s a very dry wind. As the air goes down in elevation, it actually warms and dries. And fires love dry conditions,” said Cory Mueller, a meteorologist for the National Weather Service in Sacramento. And besides drying out, air rushing over peaks and down mountain slopes speeds up as it’s forced through narrow canyons and passes.

At least 14 deaths have been reported in Butte County, ravaged by the Bear fire. That fire was one of many in California ignited by lightning in mid-August.

The Creek fire, which burned through the Sierra National Forest in Fresno and Madera counties, initially spread quickly for a different reason.

The winds were normal on Sept. 4, when the fire started. But the next day, “that fire hit fuels that it liked” and grew rapidly, creating a towering cloud — called a pyrocumulonimbus cloud — of smoke and moisture pushing skyward so enormous it resembled the giant clouds seen when a thunderstorm develops, according to Cindy Bean, meteorologist with the National Weather Service’s Hanford office.

At some point, that column of rising air and smoke got so heavy with the water vapor contained in it that it collapsed downward, creating a downdraft of air aimed at the ground and spreading winds rapidly out over the surface. “When that column collapses,” Bean said, “the wind comes straight down and then spreads out in all directions. So that enabled the fire to spread in many directions at the same time.”

That rapid spread of the fire forced the evacuation of hundreds of campers by helicopter from the mountains, whose only way out by road was cut off by flames.

Then, after Labor Day, the same Santa Ana-style winds that affected Northern California and Oregon also came speeding through the canyons of the central Sierra. In this part of California, they’re called Mono winds — because the winds blow from the area of Mono Lake — and they sent gusts of 40 mph from the northeast through the San Joaquin River canyon, helping to push the Creek fire toward the communities of Auberry and North Fork, Bean said.

In Los Angeles County, firefighters worried that the same Santa Ana winds from the northeast would send flames from the Bobcat fire in the San Gabriel Mountains into foothill suburbs like Altadena, Arcadia, Bradbury, Duarte, Monrovia, Pasadena and Sierra Madre. Late last week, the fire began to burn toward the north, away from the cities, although on Sunday, new evacuation orders were issued as dangerous wildfire conditions returned.

The Santa Ana winds, thankfully, ended up not being that strong around the El Dorado fire in San Bernardino County, a blaze sparked by a pyrotechnic device used during a gender reveal party in Yucaipa, nor the Valley fire in southern San Diego County, said Brandt Maxwell, meteorologist for the National Weather Service’s San Diego office.

The location of the El Dorado fire happened to be sheltered from the Santa Ana winds by mountains, and the strongest winds in southern San Diego County just happened to miss where the Valley fire was burning, Maxwell said.

Strangely enough, the oppressive smoke fouling the skies is helping firefighters in some parts of California.

The smoke is so thick that a lot of sunlight can’t get down to the surface and is bouncing off the layer of smoke in the air. That has resulted in surface temperatures that are cooler, helping out firefighters in the Creek and Bobcat fires.

In the San Francisco Bay Area, a marine layer of low clouds and fog helped in recent days to keep dry, hot Diablo winds away from the region, which is close to containing the LNU, SCU and CZU lightning complex fires, said Rick Canepa, meteorologist with the National Weather Service office in Monterey. And the heavy smoke — which led to an apocalyptic-looking glow of dark orange in the skies of San Francisco last week — drove down temperatures roughly 20 degrees below what they had been forecast.

Bill Nye Breaks Down The Science Behind Skin Color, Points Out ‘We’re All One Species’