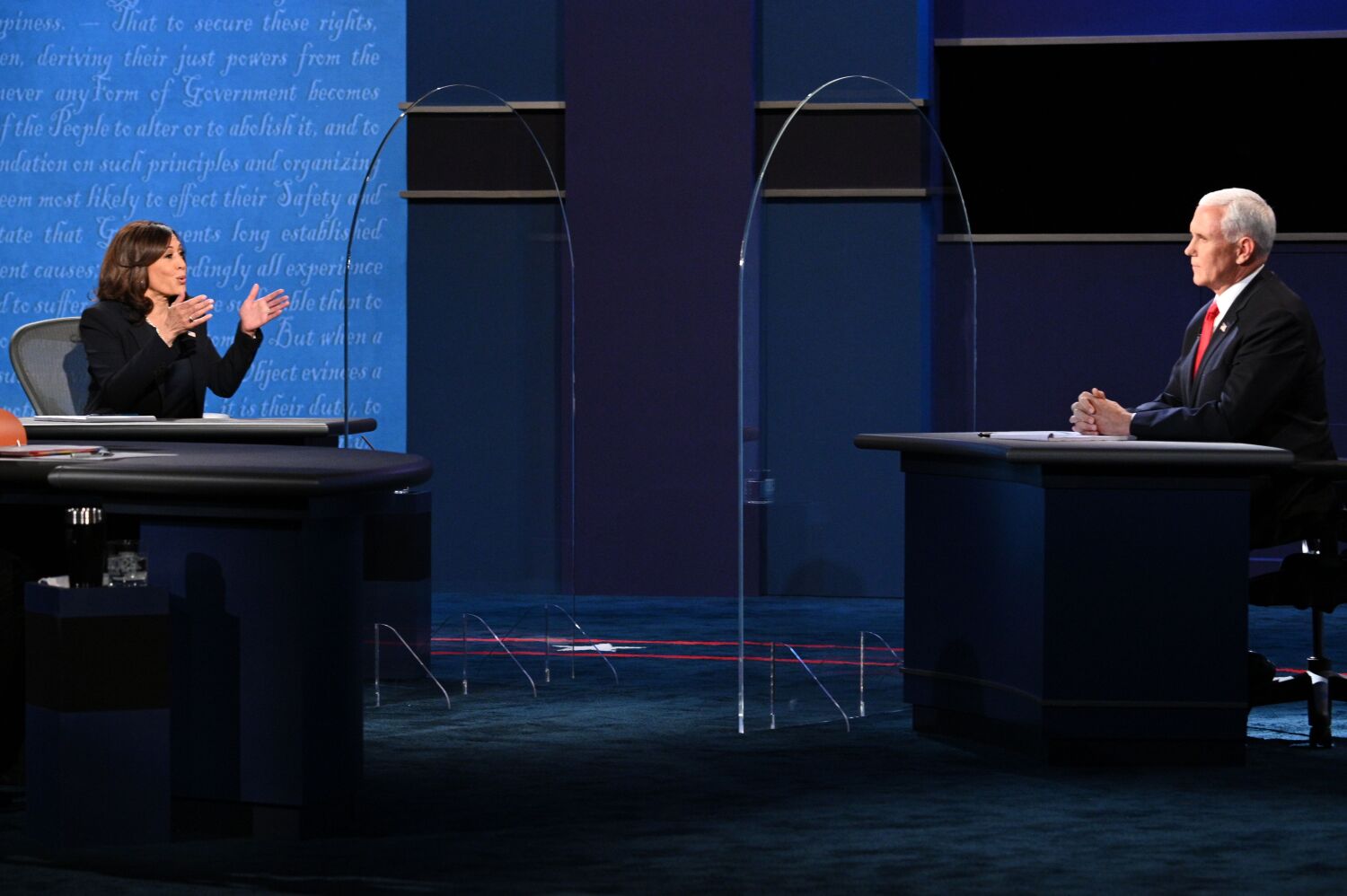 So I was wrong.

Up until the start of Wednesday’s vice presidential debate, I had been worried that Kamala Harris would fall victim to Mike Pence’s Midwestern-nice shtick, honed during his time as governor of Indiana.

That if the California senator came after him like the hard-charging former prosecutor that she is, Pence would just shake his head and smile that smarmy smile, making Harris look like an angry Black woman and himself the picture of calm and civility.

But then it happened.

With just one exchange, Harris out-Midwestern-niced the Midwestern nice master, exposing Pence for the overconfident, condescending, weak and scared white man that he really is.

And even more importantly, she put a different kind of dent in the glass ceiling. Using a perfectly timed combination of pointed statements, glares, smiles and exasperated sighs, Harris reset the notion of what is acceptable behavior for Black women interacting with white men in power. Being assertive and uncompromising doesn’t have to mean being “angry.”

“The truth and the fact is,” Harris began, “Joe Biden has been very clear. He will not raise taxes on anybody who makes less than $400,000 a year.”

Pence interrupted her, one of 16 times, according to NBC News. “He said he’s going to repeal the Trump tax cut.”

Pence: “What’s important, as you said, is the truth.”

Pence: “Joe Biden has failed twice in the debate last week but he’s going to repeal the Trump tax cut. That was tax cuts that gave the average working family $2,000 in a tax break every single year.”

Harris, nodding slowly and smiling : “That is…”

Pence: “…Is he only cutting, is he only going to repeal part of the Trump tax cuts?”

“If you don’t mind letting me finish,” Harris said, taking a deep breath and raising her hand, “we can then have a conversation. OK?”

What is so remarkable about this exchange is that Harris was able to genuinely articulate the range of emotions that Black women experience every single day, but that we so often feel unable to express without being written off — especially in workplaces. She was righteously angry. She was patronizing. She was kind. She was amused. She was annoyed. She was gracious. She was aggressive.

Of course, there’s not a woman in this country who hasn’t felt the need to modulate her behavior to get ahead in a man’s world. Women of all races get unfairly punished for expressing such emotions, usually getting ignored and treated as lesser beings.

Pence on Wednesday also spoke over the moderator, USA Today’s Washington Bureau Chief Susan Page, who is white. And I suspect no woman has been mansplained as many times and by as many powerful men as Hillary Clinton.

But intersectionality is a thing and so, as Black women, we face another level of scrutiny entirely. The tweets and comments from Republican politicians and right-wing media commenters about Harris being ill-tempered are proof enough of that.

On Wednesday during the debate, she was attacked for her “face and head roll,” her “sass,” “pursing her lips and horrendous body language,” being “angry and laughing,” “acting like a crazy person” and having a “bitchy black female attitude.” Then on Thursday, President Trump called her a “monster” — as in “this monster that was on stage with Mike Pence.”

Harris was the first Black woman — as well as the first South Asian woman — to represent a major-party ticket in a general election debate. And yet, she is still a Black woman and Black women, by most metrics of American society, including pay and access to healthcare, rank at or near the bottom in terms of equity.

And this is a big part of what makes the old angry Black woman trope so insidious and so often a self-fulfilling prophecy. The more we are denied opportunities because of years upon years of systemic racism, the angrier we get — understandably so — and the more opportunities are denied to us.

What I saw on that debate stage in Salt Lake City on Wednesday was Harris beginning to break that cycle.

The vice presidential debate might not have changed a lot of minds in terms of who to vote for, but it will go down in history as setting a new standard and example for Black women ascending the ranks of power. In the coming years, expect a lot more of us to, like Harris, refuse “to sit here and be lectured by the vice president” or anyone else.