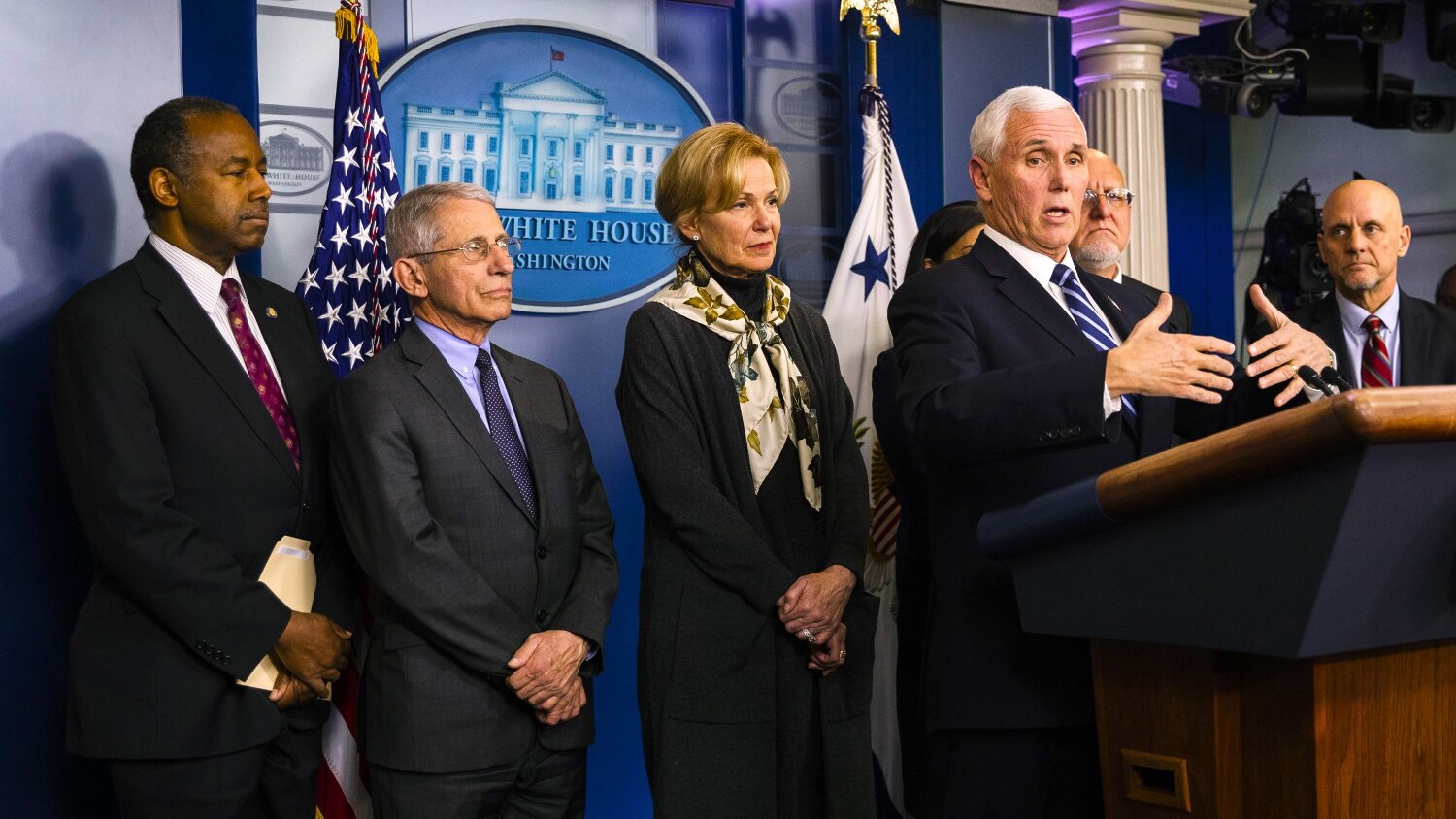 Nearly 2.3 million Americans have been infected with the coronavirus that causes COVID-19, and about 120,000 of them have died. With stay-at-home orders beginning to ease, the number of new cases confirmed each day is rising in some of the nation’s most populous states, including California, Texas and Florida.

Yet the vice president of the United States thinks the country is doing a great job managing the pandemic.

In an opinion piece in the Wall Street Journal this month, Mike Pence wrote that America was winning the fight against the virus, thanks to the leadership of President Trump.

Pence, who leads the White House coronavirus task force, made an array of claims to bolster his case: The national public health system is stronger now than when the outbreak began, he said, more tests are being given than ever before, and we’re on track to have a vaccine this fall.

The L.A. Times asked Dr. Georges Benjamin, executive director of the American Public Health Assn., and Julie Swann, an expert in healthcare systems at North Carolina State University, to assess Pence’s statements and put them in context. Here’s what they said.

“There isn’t a coronavirus second wave.”

Swann agreed with Pence’s contention that we’re not facing a second wave of the coronavirus — but that’s because most states are still in the midst of their first wave of the outbreak, she said.

“I expect many more cases and deaths in the weeks and months to come,” Swann said.

Places that have have already weathered significant outbreaks are certainly vulnerable to a second wave of infections, “just as Beijing is currently experiencing,” she added.

“Our public health system is far stronger than it was four months ago.”

No, it’s not, Benjamin said.

“While we’re working hard to address COVID-19, we are nowhere near where we need to be in terms of contact tracing and testing capacity,” he said. “We still have shortages of PPE [personal protective equipment], we still have supply lines that don’t work, and when the next disaster hits on top of this one — most likely severe storms — we are going to be up the creek.”

He added that COVID-19 was not the only health crisis the country was facing. Sexually transmitted diseases continue to plague Americans, as do opioids, obesity and gun violence. Maternal mortality is up, as are deaths from cardiovascular disease.

“We are winning the fight against the invisible enemy.”

Swann agreed, saying the nation’s death toll would likely rise by many thousands more in the coming months. She noted, however, that many governors, universities and companies took swift action that led to greater physical distancing and ultimately slowed the coronavirus’ spread in the U.S.

“We have not conquered SARS-CoV-2,” she said, “but I hope the distancing measures have given our health systems the time to prepare for the many challenges yet to come.”

“More than half of states are actually seeing cases decline or remain stable.”

This is correct, according to the most recent data. That may change, however, as the country continues to open up, Swann said.

“For the most part, states that opened early — like Georgia, North Carolina, South Carolina and Texas — are already starting to see a rapid increase in cases,” she said, “which are likely to grow over the coming weeks.”

“Every state, territory and major metropolitan area, with the exception of three, have positive test rates under 10%.”

As of Friday, there were four states — Arizona, Alabama, Washington and South Carolina — where more than 10% of diagnostic tests came back positive, according to data collected by researchers at Johns Hopkins University.

But the experts agree that’s nitpicking. Benjamin says he’s more concerned about whether positive test rates will remain that low as businesses continue to open up.

“In the six states that have reached more than 1,000 new cases a day, increased testing has allowed public health officials to identify most of the outbreaks in particular settings — prisons, nursing homes and meatpacking facilities — and contain them.”

Testing has helped health officials spot outbreaks like these, Benjamin said, but he is not yet convinced that the U.S. has been able to contain those outbreaks.

And the real problem, he said, was that the outbreaks were not prevented in the first place.

This may have been true when Pence wrote the piece, Benjamin said, but we are now seeing the number of cases going up.

Besides, he added, the figures Pence cited were averages that — because they hide peaks and valleys in regional areas — could be deceiving.

“We know we are now getting new hotspots around the country,” he said, “which will impact that number, and some of those hotspots are in places that have pretty dense populations.”

This also could have been true at the time of Pence’s writing, Benjamin said, but deaths are a lagging indicator of how the virus is spreading in a population.

“If you have a dramatic increase of cases like we’re seeing,” he said, “we would expect that two weeks later we would start seeing a rise in deaths.”

‘Today less than 6% of Americans tested each week are found to have the virus.’

Benjamin and Swann say this is likely true.

“We are not anywhere close to that now,” she said.

“We are performing roughly 500,000 tests a day, and more than 23 million tests have been performed in total.”

Those figures may be accurate, but they’re not as impressive as they might seem, Benjamin said.

Half a million tests per day “is nowhere near the number the Rockefeller Foundation had estimated that we need to manage this virus,” he said. “We need to be at 1 to 2 million, maybe even 3 million a day.”

“The Strategic National Stockpile hadn’t been refilled since the H1N1 influenza outbreak in 2009.”

Pence was correct that the Strategic National Stockpile hadn’t been refilled since the H1N1 influenza outbreak, Benjamin said. Still, he said, it was the federal government’s responsibility to restock it, and they didn’t.

That means that, when the pandemic hit, healthcare providers were getting equipment that was out of date and dysfunctional.

“No American who required a ventilator was ever denied one.”

Swann and Benjamin say that, as far as they know, this statement is correct.

Benjamin said, however, the reason no American was denied a ventilator was that healthcare workers jury-rigged DIY ventilators when they needed them.

Swann added that the decision of some governors to issue shelter-in-place directives helped limit the need for ventilators in the first place.

“We are well on our way to having a viable vaccine by the fall.”

This statement is off by about four or five months, Benjamin said.

“We’ve slowed the spread, we’ve cared for the most vulnerable, we’ve saved lives, and we’ve created a solid foundation for whatever challenges we may face in the future.”

Pence attributed these successes to the Trump administration’s “whole-of-America approach” to getting the outbreak under control. Benjamin challenged the notion that Washington, D.C., deserved the credit.

“They’ve had the most dysfunctional inter-government process I’ve ever seen in my life,” he said.

He added that “the federal government certainly saved lives, but they could have saved more.”

Bill Nye: Wearing A Mask Is ‘Literally A Matter Of Life And Death’

After Meat Workers Die of Covid-19, Families Fight for Compensation