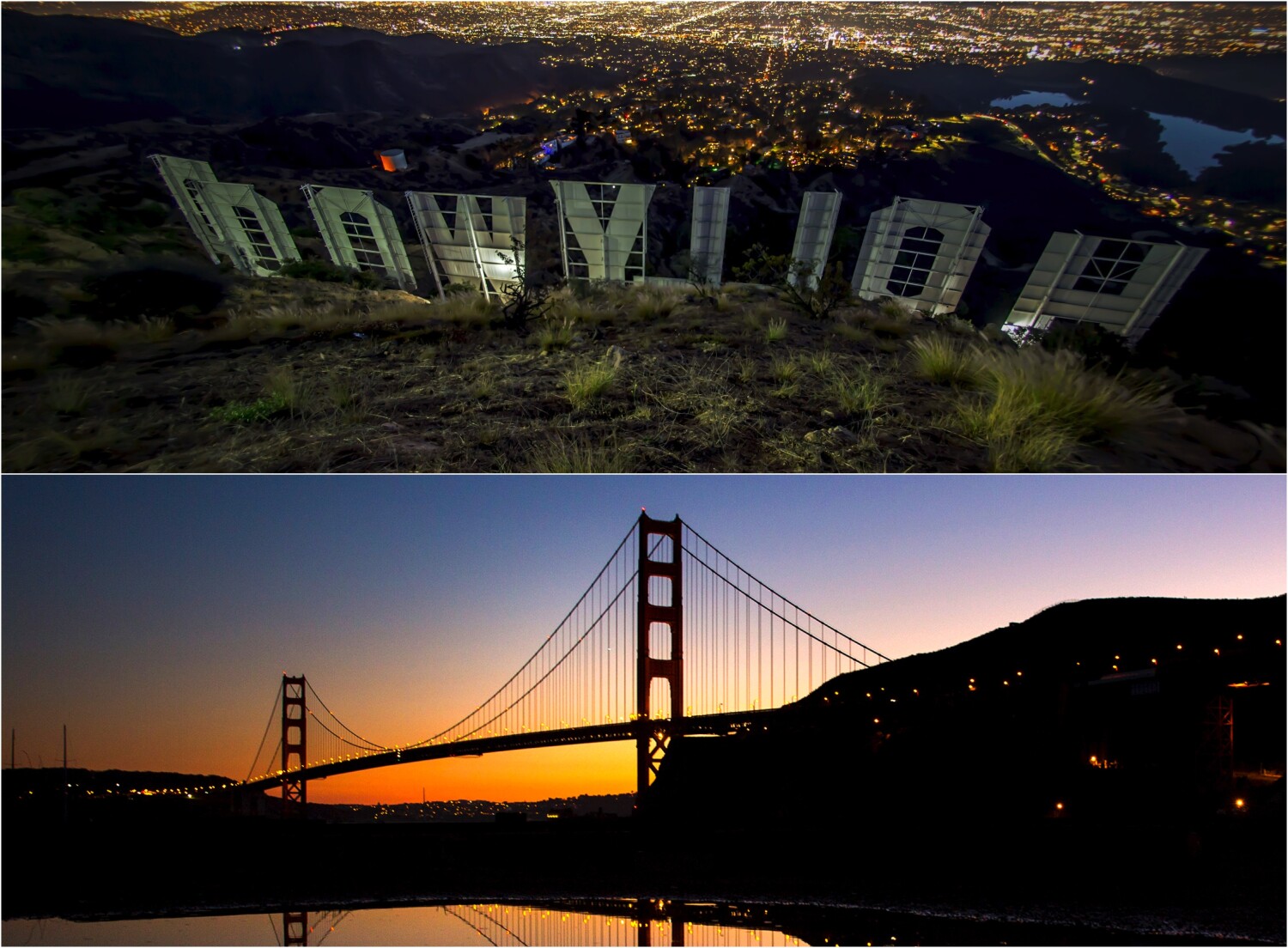 California is a land mass of 164,000 square miles, spread like a leviathan along the Pacific. You can divide it any number of ways.

Inland versus coastal. Hollywood versus Silicon Valley. The crowded cities and suburbs versus the lightly populated rural expanses, where, given a choice, many would gladly break away to create a new state.

But there is no sharper split, no line dug deeper in California’s sandy beaches, than the divide between those who root for the Los Angeles Dodgers and fans of the San Francisco Giants.

Yes, at bottom it is about baseball. The two teams, who share one of the oldest and deepest-seated rivalries in professional sports, will settle their differences — for this season, anyway — in a best-of-five series beginning Friday night in the city by the Bay. The winner will go on to play for the National League pennant and a place in the World Series.

Clad in their trademark colors — orange-and-black, Dodger blue — the teams aren’t just a collection of players on a baseball diamond but the stand-in for a contest between cities that can’t be measured in balls and strikes, or decided by runs batted in or men left stranded.

It’s like the Cold War rivalry between East and West, only without missiles and the threat of nuclear annihilation.

From meager beginnings — a Spanish settlement, a roisterous Gold Rush town — Los Angeles and San Francisco have grown into two of the world’s great cities. But that doesn’t mean they celebrate each other.

Seen from the north, Los Angeles is an undifferentiated sprawl, a smoggy, celebrity-addled home to the airheaded and vain.

Viewed from the south, San Francisco is a pretentious and prettified crackerbox of a city, foggy and filled with a bunch of weirdos and effete snobs.

Of course that’s a sweeping generalization. There are some who love both places. And, for the most part, the animosity runs largely in one direction. While people in San Francisco tend to look down their skyward noses at Los Angeles, many who live in Los Angeles fondly regard Frisco — a word that sets many Bay Area teeth on edge — as a fun town and great place to party. They simply hate the Giants.

The clash of the two best franchises in baseball is their first postseason meeting since the teams began playing back in New York and their fans started barking at each other 131 years ago.

The competition and animosities moved West when the teams arrived in 1958 in their respective cities, the capital of regions set 400 miles apart. (The Giants, led by Willie Mays, beat the Dodgers and pitcher Don Drysdale 8-0 in the first West Coast major league game on April 15.)

It is then their rivalry became something more.

But here’s the thing: Like a lot of antagonists, Los Angeles and San Francisco have more in common than their partisans would care to admit.

“I can get good sourdough in Los Angeles and good Mexican food in San Francisco,” said Paul Maslin, a political pollster who’s spent decades sampling public opinions in California and lived in both places. “So what’s the difference?”

Indeed, why root so fiercely for either team?

The nature of sports has changed drastically since the Dodgers and Giants made their way west, as free agency has turned players into mercenaries chasing the highest bidder. It is rare these days for fans and a team’s stars to grow old together, as they once did. We cheer a uniform and the revolving door of personalities who pass through and don, for a time, their distinctive colors.

And yet the rivalry endures. Maybe it’s in the air.

“Growing up, I couldn’t stand L.A. It was sunny and shallow and water-wasting,” said Jim Newton, a California historian and former Times editor, who, like all good citizens of the north, came naturally to his hatred for the Dodgers. Then he moved to Los Angeles, which he came to better understand and even grew to love.

Still, Newton roots passionately for the Giants. Maybe it’s in the blood.

Some will always take things too far. Juan Marichal, the Giants pitcher, clubbing John Roseboro, the Dodgers catcher, on the head with his bat was a sickening thing, made no less so by the fact the two reconciled and became unlikely friends.

Brian Stow, a Giants fan who was nearly beaten to death by a pack of Dodgers fans on opening day 10 years ago in Los Angeles, will forever bear the weight of that trauma and carry its scars.

For most, however, the rivalry between north and south, between blue and orange-and-black, is an outlet for pride, a lovingly tended grudge and a happy diversion from life’s more serious things.

“It’s more fun than it is warfare,” said Maslin, a fan of the Dodgers.

And these days isn’t that a welcome relief?

Staunch Donald Trump supporter and ally Erik Prince allegedly supplied weapons, mercenaries and aircraft to a Libyan militia commander for a plot to overthrow the internationally backed Libyan government, according to a United Nations investigation, The […]

Cardi B and Megan Thee Stallion: Are they enemies of God? Within hours of release, the rappers’ filthy new collaborative single “WAP” became an instant candidate for song of the summer. The single (whose title […]