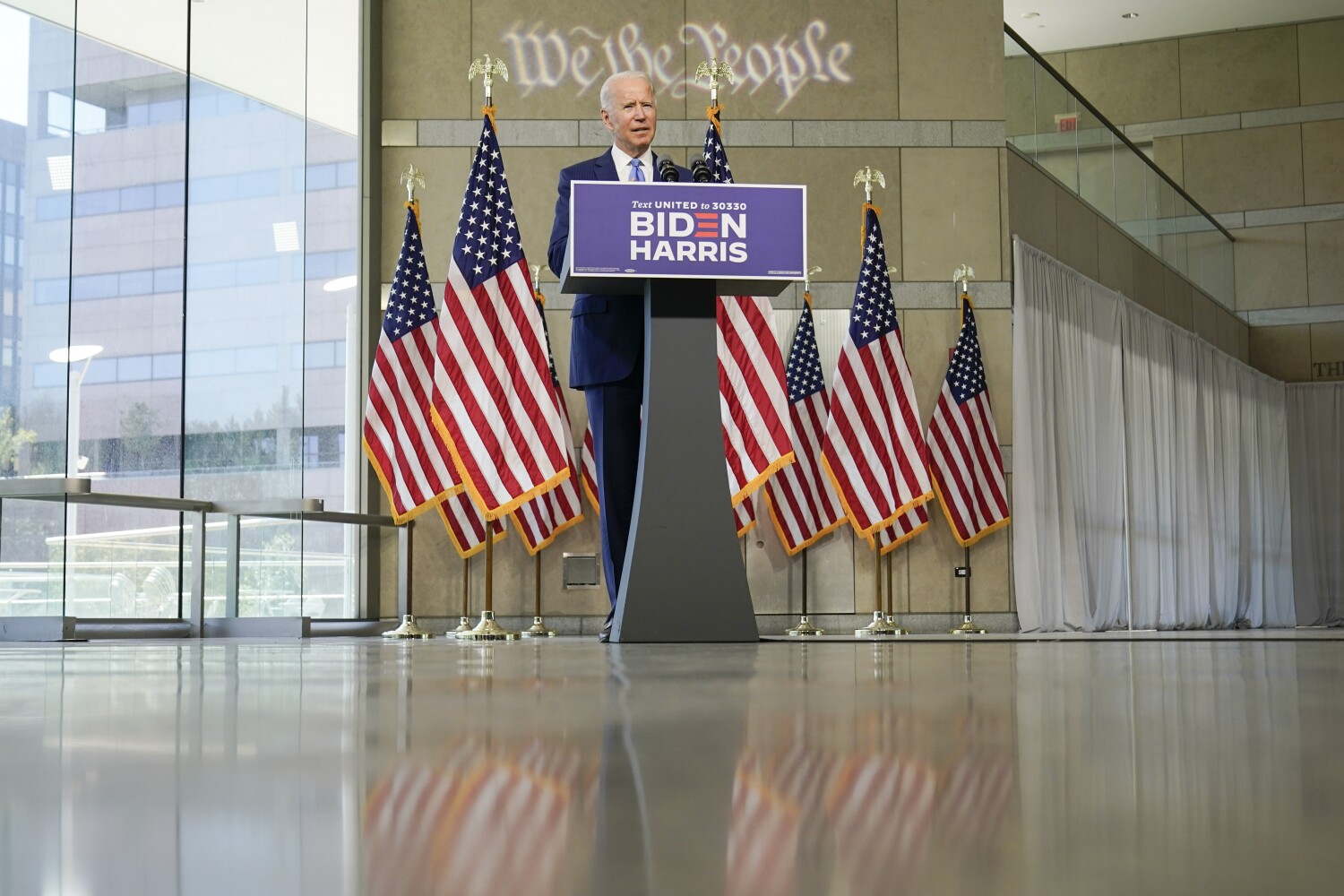 Democratic presidential nominee Joe Biden on Sunday portrayed President Trump’s determination to lock in conservative control of the Supreme Court in the final weeks of the presidential campaign as a potent threat not only to Americans’ healthcare, but also to the nation’s democratic traditions.

As the country neared 200,000 deaths from COVID-19, Biden warned that a more conservative court could swiftly overturn Obamacare, eliminating health insurance for millions of Americans, and said voters “know their healthcare hangs in the balance in the middle of the worst health crisis in living memory.”

The former vice president thus deliberately linked healthcare to the emerging battle to fill the Supreme Court vacancy left by the death Friday of Justice Ruth Bader Ginsburg. He has sought for months to turn the November election into a referendum on Trump’s handling of a devastating pandemic and economic calamity.

Biden’s comments, in a speech at the National Constitution Center in Philadelphia, reflect concerns by Democrats that an abrupt change of focus could provide a boost for Trump’s beleaguered campaign in the final six weeks of the presidential race.

A protracted, partisan Senate debate over a new Supreme Court nominee could create a political spectacle that would compete for voters’ attention as the race moves into its final weeks.

Republicans hope the prospect of a Supreme Court that would block abortions and overturn Obamacare will galvanize disaffected Trump voters who otherwise might stay home. Democrats are betting that voters see the deadly virus and high unemployment as more urgent concerns, especially since Democrats almost certainly cannot block the Republican-controlled Senate from acting.

Mindful of that reality, Biden appealed to Senate Republicans to “follow your conscience” and refrain from holding confirmation hearings or voting on a new nomination before the next president is sworn in. Trump said Saturday he would name his nominee this week and expected the Senate to act quickly.

“Cool the flames that have been engulfing our country,” Biden pleaded, directly addressing GOP lawmakers.

“To jam this nomination through the Senate is just an exercise in raw political power,” he said.

“The last thing we need is a constitutional crisis that plunges us deeper into the abyss — deeper into the darkness,” he added. “If we go down this path, it would cause irreversible damage.”

While Trump spent the crisp fall day golfing at a course in Virginia, key Senate Republicans reiterated their determination to swiftly fill the Supreme Court seat. Despite two defections, they so far have the votes to do so.

On Sunday, Sen. Lisa Murkowski of Alaska joined Sen. Susan Collins of Maine in opposing the filling of Ginsburg’s seat before the election — although she did not rule out voting for the nomination in the lame-duck session between the election and the swearing-in of the next Congress in January.

Murkowski had previously said that she would adhere to the same position she took in 2016, when Senate Republicans refused to bring President Obama’s Supreme Court nomination to the floor for ten months, insisting it was inappropriate in an election year.

“My position has not changed,” Murkowski said in a statement.

Two other closely watched Republican lawmakers, Sen. Lamar Alexander of Tennessee and Sen. Rob Portman of Ohio, both said they would support Trump’s efforts to fill the vacant seat, however.

“No one should be surprised that a Republican Senate majority would vote on a Republican President’s Supreme Court nomination, even during a presidential election year,” Alexander said in a statement.

Other Republicans suggested that the prospect of contested election results made it vital to fill the seat in case the Supreme Court had to step into any election dispute, as it did to resolve the contested 2000 presidential election.

In that case, it voted 5 to 4 to stop a ballot recount in Florida, in effect awarding the White House to George W. Bush.

Cruz suggested the former vice president might bring litigation over the vote, prompting host George Stephanopoulos to note that while Biden has not explicitly threatened to challenge the result, Trump has repeatedly warned of a “rigged” vote if he loses.

Democrats argued that the country was already too deep into the electoral process to move ahead with filling Ginsburg’s seat.

“In 25 states across our country — half of our states — Americans are already voting for the next president,” Sen. Christopher Coons (D-Del.), who sits on the Senate Judiciary Committee, said on “Fox News Sunday.” “We’re not 10 months or nine months away from an election — we’re just 44 days from an election.”

In his Philadelphia speech, Biden sought to frame the dispute in terms of healthcare, pointing to Republican efforts to overturn the Affordable Care Act, known as Obamacare, the most far-reaching social legislation in decades.

The Supreme Court is set to hear oral arguments in a key Obamacare challenge a week after the election without Ginsburg, who had previously voted with liberal colleagues to keep its provisions in place. A 4-4 vote would leave a lower court ruling in place that could effectively gut parts of the healthcare law.

Like Biden, Democratic lawmakers have consistently described Trump’s response to the coronavirus outbreak as inept and negligent. They did so again Sunday, also tying it to the looming Supreme Court confrontation over the healthcare law.

House Speaker Nancy Pelosi, interviewed on ABC’s “This Week,” said the president “doesn’t want to crush the virus, he wants to crush the Affordable Care Act.”

If the battle over replacing Ginsburg continues to hold center stage, and the issue does not begin to fade into the background — as Trump’s efforts to depict racial justice protests as a law-and-order issue have largely done — the president’s allies have signaled they hope to energize his base by emphasizing the importance of reshaping the federal judiciary.

One of the most far-reaching effects of Trump’s presidency has been the conservative transformation of the Supreme Court and the federal bench. That has delighted Republicans, including those who say they have reservations about the president on other matters, such as his bombastic, provocative style.

After the 2016 campaign, Trump’s emphatic pledge to name conservatives to the federal judiciary, including his release of names of potential candidates for the Supreme Court, was credited with helping power him to victory.

But the current court fight appeared to be galvanizing Biden’s camp as well. The nonprofit fundraising platform ActBlue said on Twitter that $100 million had poured in from small donors to Democratic candidates and activist groups since Friday evening, when Ginsburg’s death was announced.

Democrats made clear that they will link the high-court confrontation to the erosion of other democratic institutions under Trump.

Sen. Cory Booker (D-N.J.) said the Republican rush to replace Ginsburg “does a tremendous amount of damage to the institution of the Senate as well as to the legitimacy of the court.”

“We’ve got to start stepping back and having our larger view of history,” he said on CBS’ “Face the Nation.” “It’s not just the hotly contested issues of civil rights and women’s rights and LGBTQ rights, all that’s really in the balance here, but also the long-term strength of our democracy and the institutions that are so critical to our success as a nation.”

Trump’s optimistic prognostications on the pandemic, including his contention that the country is rounding a corner on the outbreak, were again contradicted by public health experts.

Former Food and Drug Administration Commissioner Scott Gottlieb said there is an “unmistakable spike” in coronavirus cases. Appearing on CBS, he cited a “lot of risk” in coming months, saying: “I think we have at least one more cycle with this virus heading into the fall and winter.”

Billionaire philanthropist Bill Gates, whose foundation has taken an active role in the worldwide fight against the pandemic, said on Fox that the U.S. performance has been poor.

“I do think we need to own up to the fact that we didn’t do a good job,” said Gates. “We can’t pretend like we got a good grade.”

As the death toll continued to rise, Washington’s National Cathedral offered its own poignant memorial. It rang its bell 200 times, tolling once for each thousand lives lost so far in the pandemic.

Five takeaways from the final night of the RNC

Here are the 12 propositions on California’s November ballot