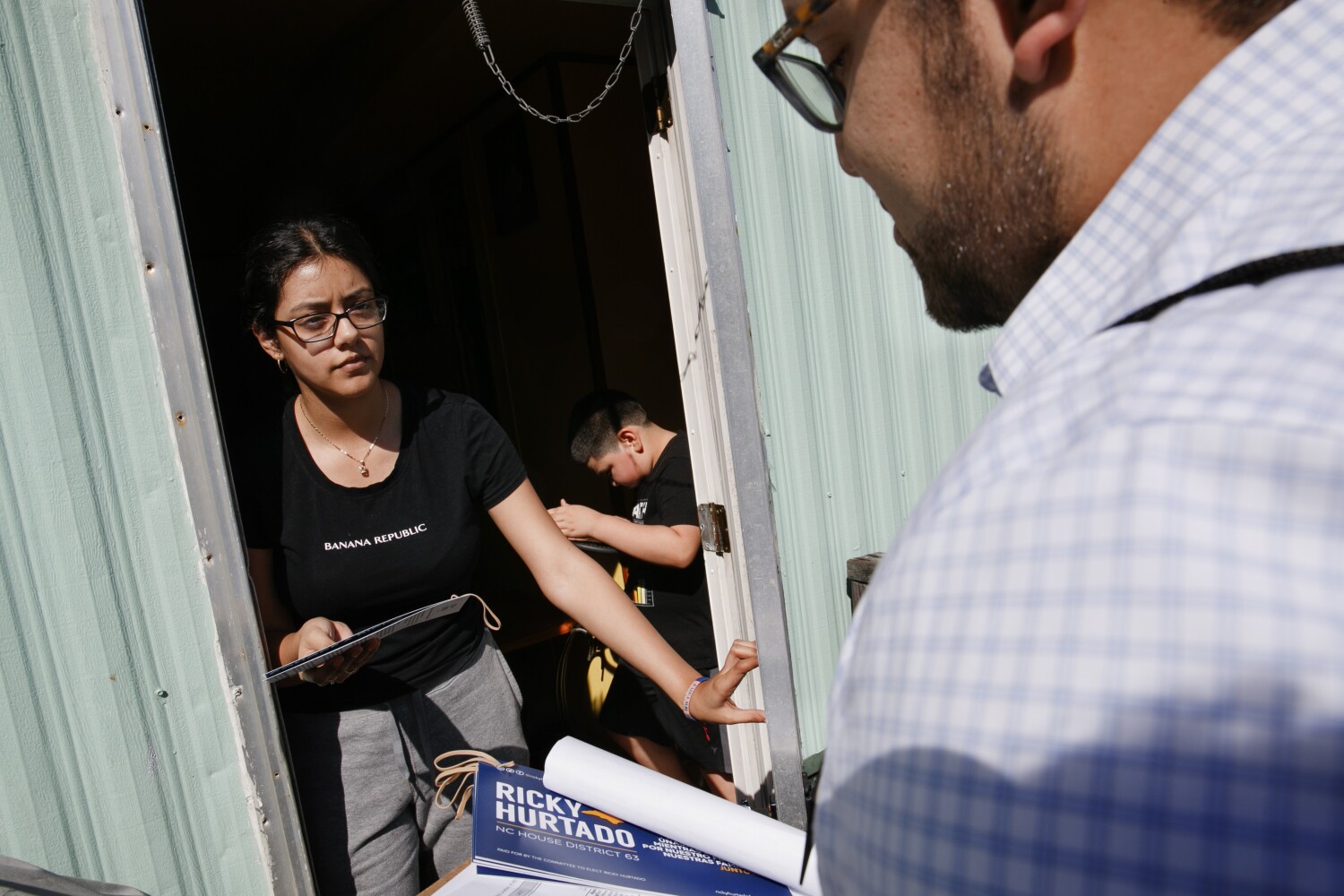 Most of the attention — and money — in the 2020 election cycle is focused on the presidential race and control of the Senate, but some of the most consequential elections are happening in small state legislative races across the country.

Regardless of which party controls the White House and Congress, or how the new 6-3 conservative majority on the Supreme Court rules on abortion rights, LGBTQ protections or voting access, state legislatures will pass or reject some of the laws that most directly shape people’s lives. In nearly 40 states, they will play a key role next year in drawing the new congressional and general assembly maps that will establish the balance of power for the next decade.

After suffering devastating losses at the state level before the 2011 redistricting, Democrats are hoping to have a seat at the table this time.

That will require electing candidates like Ricky Hurtado, a 31-year-old former teacher running in a diverse and growing suburban North Carolina House district. Hurtado is outraising Republican incumbent Stephen Ross, who won in 2018 by just under 300 votes out of 30,000 cast. The Burlington seat, between Greensboro and Durham, became more favorable for Democrats after a 2019 court decision forced Republicans to redraw some districts.

Hurtado, whose parents fled El Salvador’s civil war in 1980, grew up in rural North Carolina and has made education a central focus of his campaign and reached out to Black voters and the growing Latino population in the district. Before social distancing, when he campaigned in the precincts new to the district, Hurtado found some residents were surprised to see him.

“We were realizing very quickly that there are folks there that hadn’t heard from a candidate in over eight years,” he said. “And were shocked when they found us walking their neighborhoods, because they were previously in a district that was very, very, very red.”

Democrats in North Carolina need to gain control of at least one chamber to have a say in drawing the lines for legislative districts and the congressional map — the state is expected to gain a new U.S. House seat due to population growth. They need to net six seats in the House and five in the Senate.

“Republicans have long understood that the roots of power lie in the states and state legislatures in particular, as it comes to redistricting, but also voting rights,” said Vicky Hausman, co-founder and chief executive of Forward Majority, a super political action committee spending millions on North Carolina and other states in an attempt to catch up to GOP efforts.

The Democratic Legislative Campaign Committee is focused on flipping chambers in North Carolina, Arizona, Pennsylvania, Iowa, Michigan, Texas and Minnesota and hopes to break GOP supermajorities in Kansas. As part of its “Flip Everything” push, the committee said it needed to win 48 seats to take control of 10 chambers across the country; it hit its $50-million fundraising target days before the election.

Republicans are focused on 14 states. In addition to defending their majorities in places like Texas, they are attempting to break and prevent Democratic supermajorities in the New York House and Senate, respectively. The committee has consistently outraised Democrats this year, and raised $23 million in the third quarter.

The nonpartisan Cook Political Report has rated the Republican-controlled Arizona, Minnesota and North Carolina senates and the houses in Iowa, Michigan and Pennsylvania as toss-ups. The University of Virginia’s Center for Politics has given Democrats a slight edge in the Arizona chambers and rates the Texas House a toss-up.

“Even if Biden loses Texas, the Democrats could flip the chamber,” said Chaz Nuttycombe, the director of CNalysis who drafted the forecast for the Center for Politics. Democrats have gained ground in the Texas suburbs under President Trump, he said.

Since the 2016 election, the DLCC has won 450 seats in districts Trump won and flipped 10 chambers, most notably the Virginia House and Senate in 2019. Even in the states they can’t win, Democrats say each win on a map drawn by Republicans is meaningful. “Every seat the GOP loses on gerrymandered seats is an embarrassment to them,” DLCC President Jessica Post said in a call with reporters on Tuesday. “We don’t need to win every chamber to significantly diminish the Republican power in the states.”

After losing up and down the ballot in 2008, Republicans realized 2010 could be a reset year — after the 2010 census and midterm election, whichever party controlled state legislatures would have enormous sway in drawing the state and federal election maps for the next decade. The Republican State Leadership Committee invested $30 million in key races across the country as part of the Redistricting Majority Project, or REDMAP, led by Chris Jankowski. The DLCC spent about $10 million. “We kept waiting for them to respond,” Jankowski said.

In North Carolina, the RSLC spent $1.2 million in 2010 to help the GOP win control of both chambers for the first time since the Civil War. In 2012, the party gained a supermajority in both chambers that remained intact until the 2018 election.

“Pent-up frustration does not begin to describe how Republicans in North Carolina felt when they finally took the majority,” said Chris Cooper, the head of the political science department at Western Carolina University.

Under Republican control, North Carolina declined to expand Medicaid under Obamacare and passed — and later repealed — the “bathroom bill” that targeted the transgender community and led to the state being boycotted by business groups. It passed a massive voting bill that would have cut early voting by a week, restricted which forms of ID were allowed and ended same-day voter registration. The law was struck down by a federal appeals panel that called it “the most restrictive voting law North Carolina has seen since the era of Jim Crow.”

In 2013, the Moral Monday movement, led by the Rev. William J. Barber II, began holding protests outside the state Capitol to oppose a slew of Republican-backed changes, including the voting bill and cuts to education and unemployment.

“It was less about a specific bill, but the frustration that was bubbling up in our community,” Hurtado said. “North Carolina — it’s a battleground state this year in 2020, for a reason, right? It is pretty purple. It is 50-50. But our politics have not reflected that over the last 10 years.”

Nationally, there has also been a movement among Democrats to win back legislative seats, and several groups have formed to specifically target down-ballot races or made them a focus ahead of this election.

In 2016, President Obama and Eric Holder, his former attorney general, formed the National Democratic Redistricting Committee, which has raised more than $52 million and focused on backing candidates and challenging Republican-drawn maps in states like North Carolina and Pennsylvania, which redrew its congressional maps in 2018. Obama has endorsed more than 100 state legislature candidates, including Hurtado.
Swing Left, a grass-roots group founded in 2017, named North Carolina as one of its “super states,” where it’s organizing to help Democrats win the presidential race, as well as the Senate and state legislative races.

“We’re all gonna look back in two years’ time, four years’ time, when we’re unable to win Congress because of gerrymandering and wish we had done more, unless we actually can step up and … compete for power now,” she said.

First debate: Biden holds off Trump in battle of insults