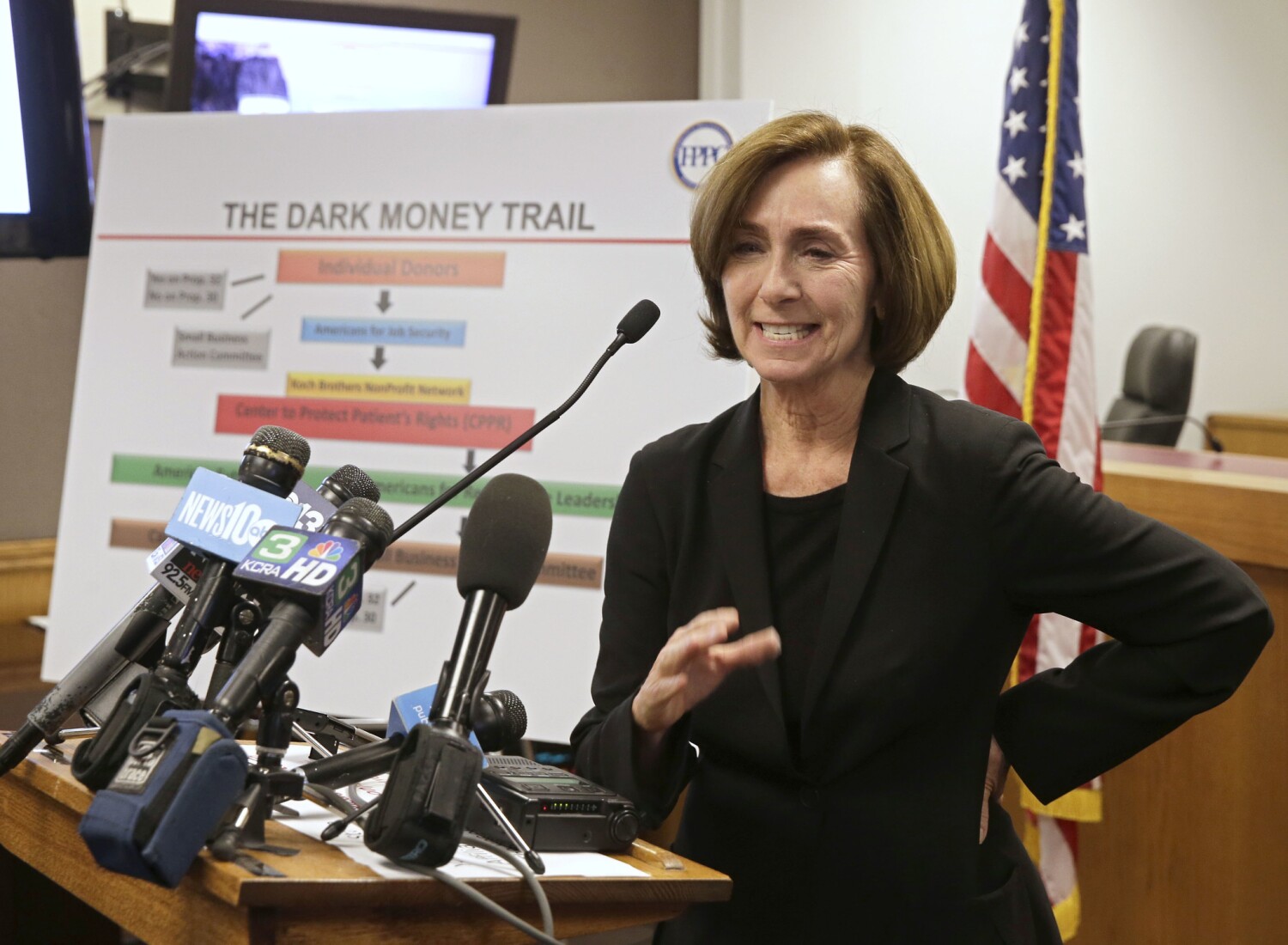 The former chair of the Federal Election Commission on Monday filed a complaint against a major contributor to the campaign to recall California Gov. Gavin Newsom, alleging that a “shell company” was being used to hide the identities of its donors.

The complaint by Ann Ravel, which was filed with the state Attorney General’s Office and Fair Political Practices Commission, is focused on a $500,000 contribution to Rescue California, one of the campaign organizations supporting the recall effort. The donation was made by Irvine-based Prov. 3:9 LLC.

Ravel said that “dark money” contributions, so called because the identities of the donors are not revealed, are not allowed in California because state law requires the true sources of campaign donations to be publicly disclosed. Ravel urged the state agencies to immediately launch investigations and to use their subpoena power to determine the identities of the donors.

“The entity appears to be nothing more than a shell company being used to evade disclosure of the person or persons funding the recall contribution,” Ravel said in the complaint. “But the people of California are entitled to know who is trying to force a costly special recall election that could cost $80 [million to] $100 million just months before the primary elections for the same office. Such a dark money scheme is antithetical to a functioning democracy and in violation of the State’s comprehensive campaign finance laws.”

Ravel, a Democrat who ran unsuccessfully last year for the state Senate, said she opposes the recall effort against Newsom and decided the file the complaint on her own accord.

Anne Hyde Dunsmore, a spokeswoman for Rescue California, said Ravel’s complaint is a transparent effort by Newsom supporters to suppress contributions to the recall campaign.

“It’s clearly a partisan stab,” Dunsmore said. “The big message to me is that they are taking us seriously now.”

State business records show Prov. 3:9 LLC described as a firm that provides “consulting services.” The two people listed as representatives for the firm, Thomas Liu and Gordon Schaller, both from Irvine, could not be reached for comment.

Before President Obama appointed Ravel to the Federal Election Commission, she served as chair of California’s Fair Political Practices Commission and in 2012 spearheaded a widespread investigation into the use of dark money in the state. In that case, regulators found $15 million in political contributions funneled through multiple organizations in an effort to defeat a statewide tax increase ballot measure and pass a measure designed to limit the political power of public employee unions. Both campaigns ultimately lost on election day.

In each case, the contributions were reported on California campaign finance documents as coming from the nonprofits themselves without listing the original donors. Only a portion of the donor list was revealed and investigators believed the money came from sources located both in and outside the state. The state imposed a record $16 million in penalties on secretive political groups that funneled money into initiative campaigns in 2012.

Only one California governor has faced a recall: Gov. Gray Davis in 2003. But as Californians reel from a sharp rise in COVID-19 cases and a gloomy economy, some have taken aim at Newsom over his administration’s restrictions that have closed businesses, implemented overnight curfews and limited family and faith traditions.

For the recall election to be called, proponents must collect valid signatures from California registered voters equal to 12% of the total ballots cast in the most recent gubernatorial election — in this case, the endorsement of some 1.5 million voters. Organizers of the campaign say they have collected close to 1 million signatures but only about half that number have been reported as having been received by elections officials and still have to be verified.

The recall got a major endorsement on Sunday from former San Diego Mayor Kevin Faulconer, a Republican, who announced on Monday that he was creating a gubernatorial exploratory committee.

Faulconer, in posts on Facebook and Twitter, said he signed the recall petition because of widespreadhomelessness in California, along with the exodus of jobs from the state and massive delays in state unemployment assistance being issued while Newsom has been governor.