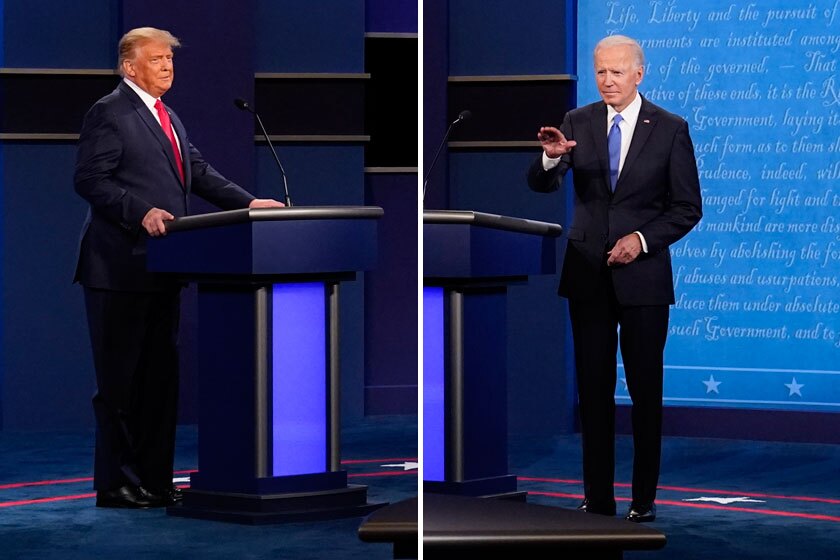 The Donald Trump who showed up for the debate Thursday was the glum one. Someone had told him to keep a lid on it, and he was visibly chastened.

“I get treated very badly,” he moped early on. “No president should have to go through what I went through.”

Trump was on such a short leash that he didn’t even bring gusto to his usual scattershot attacks on Joe Biden. He tried to interrupt the moderator, Kristen Welker, in his usual way, jabbing his finger at her and saying, “Excuse me, excuse me,” but he folded when she moved to keep him in check.

So Trump was less animated than usual, but the hangdog performance only laid bare how little substance he brings to the debate stage.

Biden knows the rules of political engagement are in splinters. The days of reasoned debate are behind us. So of course he hasn’t been trying to bring up the fine points of decarbonization or critical race theory in his head-to-heads with President Trump.

It’s hard to remember now, but campaigners like Barack Obama and Mitt Romney and Ronald Reagan and Jimmy Carter once had rational exchanges of views on topics of import and even sophistication.

But Biden — like the rest of us tired Americans — recognizes that the Trump show is nothing but brute affect, volume and body language. Whether dialed to 11 or kept to a dull roar, that show has become monotonous.

In competitions, we often think the advantage belongs to the player with the most options. A basketball player who has a wide range of shots, skills and strategies does better than a one-trick pony.

But in a verbal negotiation, the player with the most limited range often has an edge. If one person knows only English and a second person knows Yoruba, Swahili, French and English, the second person is forced to speak the monoglot’s language. And if that’s not her first language, she has less command of it.

This is true of American dialects too. Biden, like nearly all Americans with experience or education or both, has a range of idioms. He speaks folksy, posh, senatorial, legalese, heartbroken, hopeful and even (in cringe moments) something he seems to think may be Ebonics. He also can be ironic.

Trump has no ear for irony. And he speaks only the language of New Yorkese circa the 1980s. This idiom is politely described as brash. In fact, it’s more fighting style than language. Its moves are volume, interruption, vulgarity, shutdowns, insults, whataboutisms — anything to dominate an opponent, deflect an interlocutor. There’s nothing that looks or sounds like verifiable facts, a marshaling of evidence, an application of reason.

When, at one point, Biden steered the conversation from infighting to ordinary Americans, referring as he routinely does to his childhood in Scranton, Pa., Trump blurted nonsensically: “He doesn’t come from Scranton.” (Biden comes from Scranton.)

When Trump was asked about the more than 500 children separated from their families at the border and still not reunited, he went for reflexive projection. “They did it,” he said. “We changed the policy. They built the cages.”

Never does Trump engage with the question at hand. He doesn’t even defend his position on immigration or the border wall. His brain just fires out syllables meant to parry questions he experiences as attacks, meaning all questions.

And of course, here was Trump “debating” Biden on Sept. 29:

Biden: “My son was in Iraq. He spent a year there…. He got the Bronze Star. He got the Conspicuous Service Medal. He was not a loser….”

And off Trump went into a world of off-topic lies. He didn’t take the clear opportunity to temper or deny the cruel comments he has reportedly made about American soldiers. He just started madly firing a cowboy pistol loaded with the word “Hunter.”

This style is out of bounds. And Biden clearly found it repellent. He refused to even try to match it.

Biden on Thursday turned instead to a strategy he has employed throughout the campaign, one also often used with toddlers and drunks. He detached from the ego battle, for the most part ignored the jabs, smiled, looked away and shook his head to register disbelief.

Irony has been overused to meta-designate everything from trucker hats to unmet expectations. But the distance it can create remains a powerful tool, even against language and behavior as aggressive as Trump’s.

Ironists don’t mistake Trump’s claims, say, for reality; they keep his words in quotation marks. The ironic stance keeps Biden from having to walk out, to disengage or to bash back.

The Hungarian-born British psychologist Peter Fonagy has shown how it works for parents. When a mother hears her child cry, she ought to walk but not rush to attend him. And having assured him he’s been heard, she should turn right away. A good parent “lightens feelings with ironic detachment (It’s not the end of the world).”

For someone like Trump whose feelings have been taken way too seriously for way too long, ironic detachment is key. Biden displayed it when he shook his head in amused disbelief over Trump’s attack on Hunter in September. He did it Thursday when when Trump leveled left-field accusations at him or started rambling about small windows and how the sun doesn’t offer enough power.

Trump raves, lies outrageously, pushes one melodrama after another, and Biden shakes his head and keeps his focus. He used one of his favorite ways of dismissing Trump again, and it suited the moment: “malarkey.”

Irony is not flashy. But it works. And Biden has presented a a model of how to respond to Trump’s provocations in the next crucial days. America hears Trump whining about the end of the world. But we know it’s not.