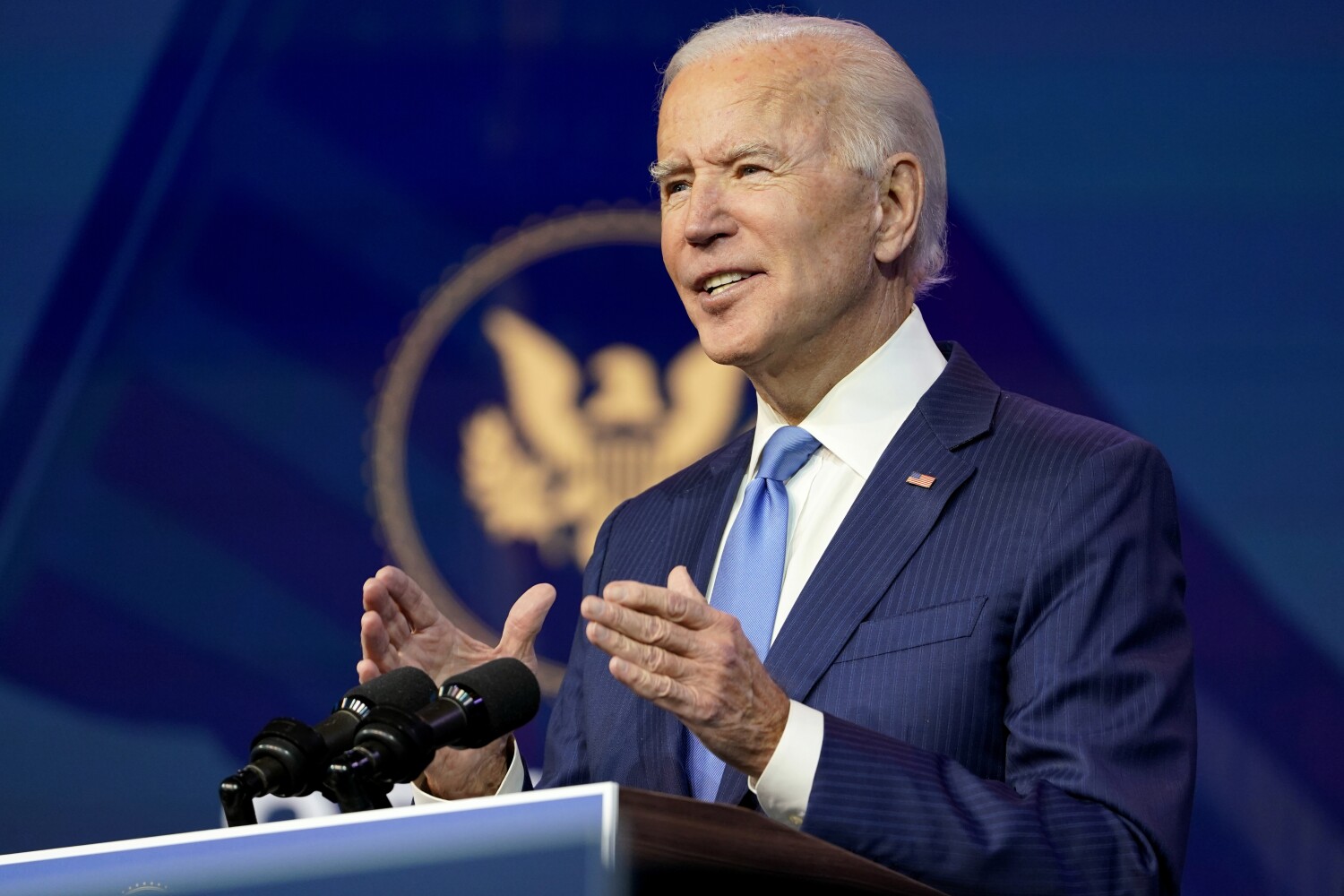 For four years, Democrats have protested President Trump’s aggressive use of presidential authority, accusing him of abusing his powers as he sought to bypass Congress’ control of federal spending, defy its subpoenas and flout the Senate’s authority to confirm senior government officials.

Now, President-elect Joe Biden has indicated he would abide by traditional restraints on presidential power — and perhaps accept some new ones — as part of his effort to restore norms that Trump trampled.

But a lot of progressive Democrats would like to see him do just the opposite.

The debate over how aggressively to push executive authority is emerging as the latest point of tension between the nascent Biden administration and the Democrats’ left wing.

Faced with the prospect that Republicans in Congress will block major legislation, progressive groups are increasingly going public with demands that Biden commit to broad uses of executive authority to wipe out student loan debt, reform the immigration system and combat climate change, among other priorities.

Biden has pushed back, publicly and in private meetings.

“Where I have executive authority, I will use it to undo every single damn thing this guy’s done by executive authority,” he said, referring to Trump, in a recent meeting with civil rights leaders, according to an audio recording that was leaked to the Intercept.

“There’s no executive authority to do that. And no one has fought harder to get rid of assault weapons than me,” Biden said. “You can’t do it by executive order.”

It’s not clear whether Biden’s remark about assault weapons was a response to a specific demand or a hypothetical example.

Major gun control organizations have urged him to use his authority to achieve less dramatic goals that the president-elect is likely to favor. Everytown for Gun Safety, for example, recently issued what it described as a “road map” for gun policy. It included executive actions to tighten loopholes in federal background checks for gun sales, crack down on so-called “ghost guns” — gun parts that can be purchased online without background checks, then assembled into working firearms — and put new resources into research on the impact of gun violence.

The debate over executive authority requires Democrats to choose between two views that many in the party hold: One rejects actions Trump took that many Democrats saw as abuses of authority. The other bridles at being asked to show restraint when Republicans did not do so for the past four years.

One example Democrats cite was Trump’s effort to get money for building barriers along the U.S.-Mexico border. Declaring a national emergency, Trump took money from the Pentagon to fund border-wall construction after Congress refused to approve it.

Democrats in the House would more tightly restrict such emergency declarations as part of a broad-ranging package of post-Trump reforms. Speaker Nancy Pelosi (D-San Francisco) has indicated that she’ll bring the measure to the floor early in the new year.

The goal, said Rep. Zoe Lofgren (D-San Jose), is to look beyond Trump to prevent a future president from abusing power.

“I don’t think curbs will be necessary for President Biden. I don’t think he has any intention of abusing his authority,” she said. But a future president could do just that, and “it’s important to rebuild the guardrails” now, when memories of the disputes of the Trump era remain fresh.

Many proposals in the House bill are popular across the disparate factions of the Democratic Party. The bill would, for example, require presidential campaigns to report contacts from foreign governments that offer election assistance, put new limits on a president’s potential financial conflicts of interest and amend the federal criminal code to make clear that granting a pardon to impede a criminal investigation into the president or his family could be prosecuted as a form of bribery.

The bill would also give Congress more effective ways to force administration officials to testify in congressional investigations. It would speed court disputes over subpoenas and create new fines for failure to comply, steps that Rep. Adam Schiff (D-Burbank), one of the main authors of the House bill, called essential for Congress to act as an equal branch of government.

“A Congress without a meaningful ability to enforce its oversight cannot pose a meaningful check” on the executive, Schiff said.

Under current law, which allows for years-long fights over enforcing a subpoena, the executive branch has “no incentive to negotiate in good faith” with Congress, Schiff said. He noted that the House is still in litigation with former White House counsel Don McGahn more than a year after a federal district judge sided with Congress over its demand that McGahn testify about Trump’s actions during the Russia investigation led by special counsel Robert S. Mueller III.

While Democrats agree on those goals, the proposed restrictions on emergency powers could prove more divisive. Many progressive groups don’t want to see those avenues of authority closed.

“Taking bold executive action does not have to require escalating a nuclear arms race with Republicans over what is an acceptable use of presidential authority,” said Adam Green, co-founder of the Progressive Change Campaign Committee.

“If Joe Biden is merely willing to go through the exact tracks that Donald Trump went through,” he could accomplish major progressive goals, Green said.

Trump’s spending on the border wall, for example, would provide ample precedent to move money within the departments of Agriculture, Transportation and Defense to advance Biden’s goals for combating climate change, he said.

Biden could also follow Trump’s example in using the federal Vacancies Act to fill Cabinet or sub-Cabinet posts if Senate Republicans attempt to block his nominees, he said.

The more Biden signals his willingness to use such tools, the more leverage he’ll have with Republican leaders, especially Senate Majority Leader Mitch McConnell of Kentucky, Green said. The goal should be to make clear to McConnell that obstruction “won’t be worth it.”
One area where the debate between progressive groups and the incoming administration has already become highly public is erasing student loan debt. A large coalition of progressive groups has supported a call by Sens. Elizabeth Warren of Massachusetts and Charles Schumer of New York, the Senate Democratic leader, for Biden to unilaterally forgive student-loan debt up to $50,000 per person.

That may be legally possible because the federal government, through the Department of Education, now finances more than 90% of outstanding student loans, making the department one of the country’s largest consumer lenders. Federal law allows the secretary of Education to “compromise, waive or release” student loan debts. Advocates for debt relief argue that the administration could use that authority in blanket fashion.

With Black families shouldering a disproportionate amount of student debt, in large part because of the existing racial gap in wealth, civil rights groups have framed debt relief as a matter of racial equity.

Black voters played a central role in Biden’s victory and “are calling for relief, and relief is what they’ve earned,” Rep. Ayanna Pressley (D-Mass.) said at a forum Thursday sponsored by the NAACP. Biden needs to “provide broad-based cancellation on day one,” she said.

The president-elect has so far resisted calls for such a massive debt-relief plan, which would have a price tag of roughly $1 trillion, according to one estimate by the Brookings Institution. In his campaign, Biden argued for more limited debt relief, up to $10,000 per person, and for action by legislation, not executive fiat.

Critics of the debt-relief proposals say they would provide most of their benefits to upper-income Americans since the largest debts tend to belong to people who have gone to medical school, law school or other post-graduate programs. More targeted efforts could provide more help to lower-income families, they say.

Others question whether a blanket elimination of debt would pass legal muster.

But debt relief has become a major touchstone for progressives, who argue that the legal questions shouldn’t deter Biden from acting.

“Let’s take executive action and force the Republicans to sue to try to stop it,” said Rep. Ro Khanna (D-Fremont). We’ve seen how negative it is for them when they sued to take away the Affordable Care Act.”