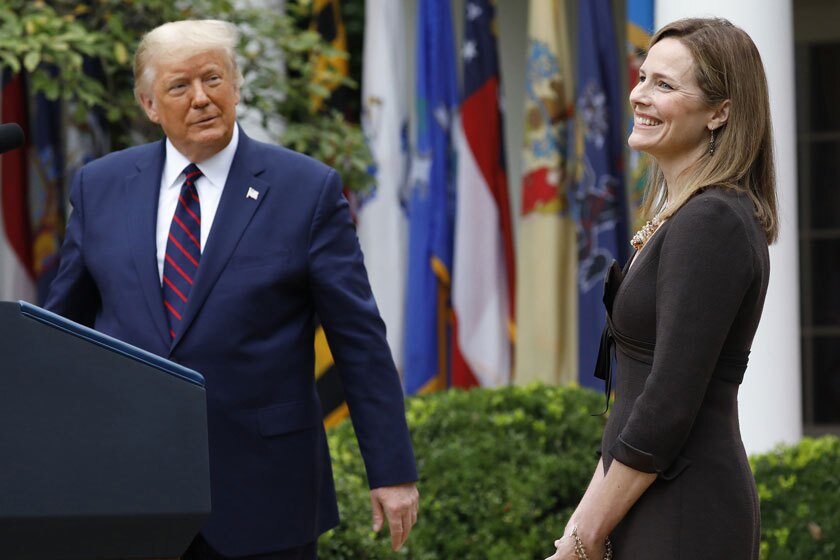 As President Trump angrily brushed aside a scorching news report Sunday on his tangled finances, Democratic presidential contender Joe Biden declared that if Trump’s allies push through an election-season confirmation of conservative judge Amy Coney Barrett to the Supreme Court, American voters “are not going to stand for this abuse of power.”

“I think it’s going to go quickly, actually,” Trump said of Barrett’s confirmation, speaking at a rambling early-evening news conference that took place shortly after the New York Times published a detailed report based on some two decades of tax returns that the newspaper obtained, pointing to years of persistent business losses and tax avoidance.

“It’s totally fake news,” Trump said of the Times report. Among many other disclosures, the newspaper said the president paid only $750 in federal income taxes in 2016, the year he won the presidency, and in 2017, his first year in office.

As Senate Republicans vowed to swiftly secure Barrett’s confirmation, their Democratic counterparts acknowledged they had little hope of blocking Trump’s choice, unveiled Saturday — but made it clear they wanted the president and the Republicans who backed him to pay a price at the polls.

With nationwide surveys suggesting that a majority of voters would prefer that the next president choose the high court nominee, Biden and his supporters have been intensifying warnings that a Supreme Court bolstered by a third Trump-appointed justice would imperil healthcare for millions of Americans amid an unprecedented public health crisis, the coronavirus outbreak.

“There’s no mystery about what’s happening here,” Biden said in remarks delivered in his home state, Delaware. If the high court’s conservative majority is cemented with Barrett’s ascension, he said, Republicans “see an opportunity to overturn the Affordable Care Act on their way out the door.”

The 48-year-old jurist’s confirmation, Biden said, could not only herald the erosion of healthcare protections, but also diminish reproductive rights and harm prospects for “Dreamers,” immigrants brought to the United States as children who want to win citizenship rights.

Trump, the only U.S. president in modern times not to make his tax returns public, has fought protracted battles to prevent his tax filings from being revealed in the course of various court proceedings or congressional subpoenas.

The Times report casts doubt on the president’s self-crafted image as a high-flying real estate developer with millions in the bank, saying he avoided paying any income tax in “10 of the previous 15 years” by declaring heavy losses. At his White House briefing, Trump said “I pay a lot” in taxes, but repeated his often-invoked refusal to disclose his returns because of ongoing Internal Revenue Service audits.

In the past, notably in a debate with 2016 opponent Hillary Clinton, he said that avoiding taxes “makes me smart.” A Trump Organization spokesman, Alan Garten, challenged the Times’ reporting and said in a statement that the president had paid “millions” in personal federal taxes since beginning his campaign in 2015, the newspaper said.

Earlier, Trump, again cheered the prospect of the high court striking down the ACA, known as Obamacare, repeating his frequent contention — so far unproved — that he has a superior healthcare plan waiting in the wings.

“Obamacare will be replaced with a MUCH better, and FAR cheaper, alternative if it is terminated in the Supreme Court,” Trump, who spent a cloudy Sunday at his Virginia golf property, wrote on Twitter. “Would be a big WIN for the USA!”

Democrats have repeatedly denounced as hypocritical the Senate plan to hurry through a replacement for Justice Ruth Bader Ginsburg, who died Sept. 18, in light of Senate Majority Leader Mitch McConnell’s refusal to even give a hearing to then-President Obama’s nominee, Merrick Garland, in 2016. That vacancy occurred nearly nine months before the election.

One reason that the court fight is so highly charged politically is that Trump for months has insisted, without evidence, that mail-in balloting is rife with fraud. Critics say he is harming public faith in the U.S. election system, as well as laying the groundwork for challenging the results that could wind up in court.

Trump surrogates insisted he was not trying to taint the electoral process. “I don’t know that he’s publicly undermining confidence as much as promoting the facts,” White House Chief of Staff Mark Meadows said on CBS’ “Face the Nation.”

“We need to make sure that what we do is protect the ballot process,” he said, adding that Trump was “right to highlight it.”

Meadows said the Senate’s Republican leadership would set a “pretty aggressive schedule” for Barrett’s confirmation hearings, and that he expected a floor vote prior to the Nov. 3 election.

The Democratic Senate minority whip, Dick Durbin of Illinois, voiced resignation that his party’s Senate minority could not force Republicans to honor the precedent against filling the seat so soon before an election. Voting has already begun in dozens of states.

“We could slow it down perhaps a matter of hours, maybe days at the most, but we can’t stop the outcome,” Durbin said on ABC’s “This Week,” speaking of Barrett’s nomination. “What we should do is to address this now respectfully.”

Senate Democrats suggested that, rather than concentrating political firepower on a fruitless attempt to block Barrett, they would instead seek to hold her to account on whether she would take Trump’s side in a disputed election outcome.

Sen. Cory Booker (D-N.J.), appearing on NBC’s “Meet the Press,” said if Barrett was confirmed, she should agree to stay out of any election-related case that makes its way to the Supreme Court.

“One of the things I want to ask her is will she recuse herself … in terms of any election issues that come before us,” said Booker, who sits on the Senate Judiciary Committee.

With the final weeks of the presidential contest set against the backdrop of the coronavirus outbreak, which has killed more than 200,000 Americans, Trump has often said that a corner has been turned in the fight to contain COVID-19.

But former Food and Drug Administration Commissioner Scott Gottlieb said the outbreak might be poised to enter a deadly new phase.

“I think that there’s a lot of concern that we could start to see a real upsurge, and this is a continuation of a broader trend underway as we head into the colder months,” Gottlieb said on “Face the Nation.”

“We were always facing heightened risk of increased spread of coronavirus as we headed into the fall and winter,” he said. “Now we’re there.”

In advance of his first head-to-head debate with Biden, set for Tuesday, Trump is expected to try to turn attention away from subjects like his handling of the pandemic and the attendant economic damage.

Instead, the president is falling back on a theme he has embraced, questioning his 77-year-old Democratic opponent’s mental fitness. On Sunday, he called for the former vice president to submit to a drug test — repeating his frequent insinuation, offered without evidence, that Biden uses some type of performance-enhancing drug.

“His Debate performances have been record setting UNEVEN, to put it mildly,” the president tweeted, adding: “Only drugs could have caused this discrepancy???”

Jill Biden, the candidate’s wife, said on CNN’s “State of the Union” that she was unworried about her husband’s debate performance.

“It’s like night and day between the two candidates,” she said.

Voting for the first time in November? Leave us a video or voice message about how you feel