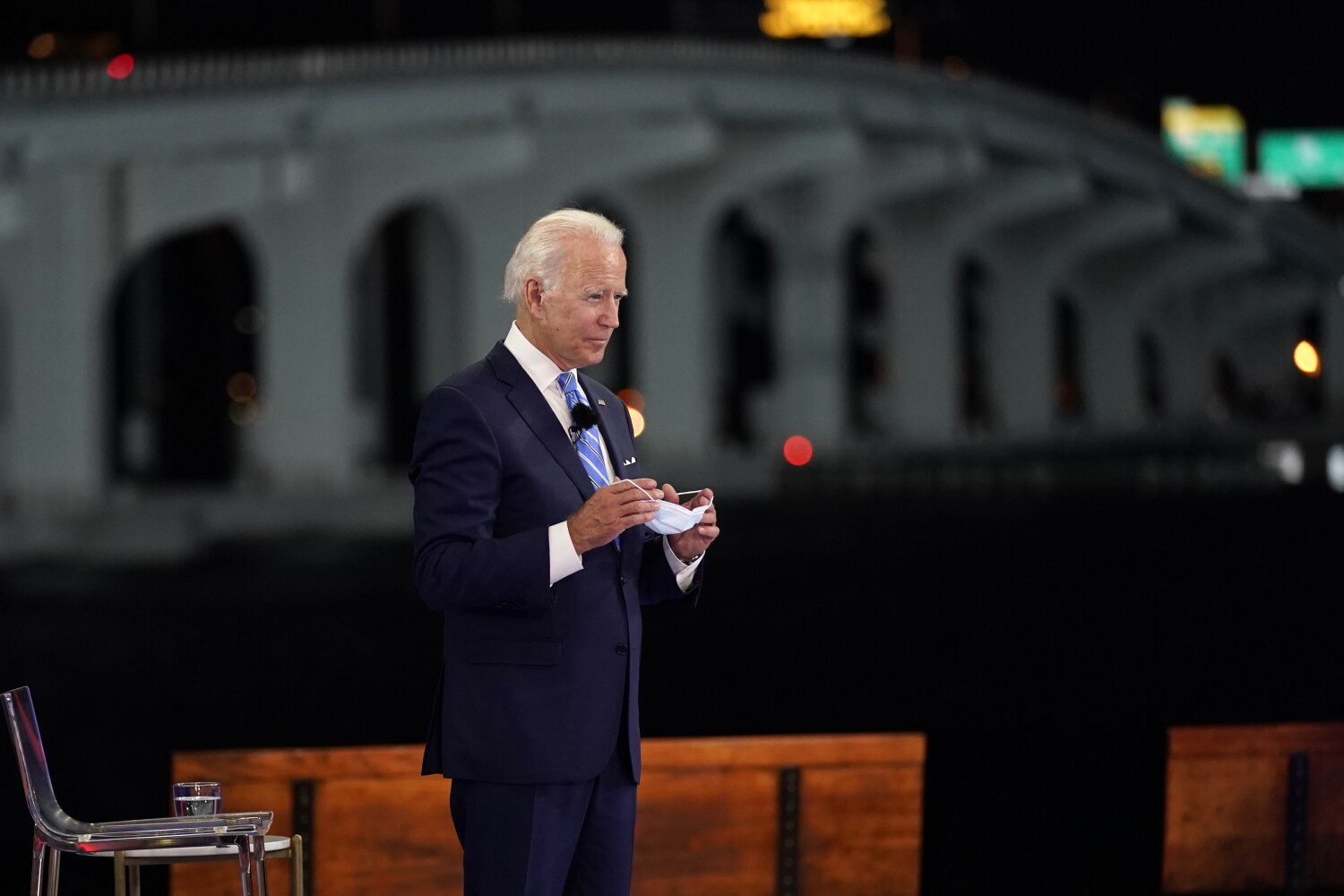 Democratic presidential nominee Joe Biden went back on the attack Monday as President Trump tried to downplay his own COVID-19 infection, with Biden saying he was “not surprised” Trump caught the coronavirus, considering the president’s resistance to social distancing or wearing masks.

“Anybody who contracts the virus by essentially saying ‘masks don’t matter, social distancing doesn’t matter,’ I think, is responsible for what happens to them,” Biden said at an NBC News town hall in Miami, moderated by Lester Holt.

Referring to last week’s presidential debate in Cleveland, Biden said that it was “a little disconcerting to look out and see his whole section; no one had masks on,” referring to Trump family members who defied debate audience safety protocols. “I didn’t quite get that.”

Biden’s sharper tone came as Trump left the Walter Reed National Military Medical Center Monday night and returned to the White House, trying to project strength despite concern from his own doctors that the president is not fully recovered from COVID-19.

On his return, Trump took off his mask before putting out a Twitter video in which he said that maybe he was “immune” from the virus and downplayed its dangerousness.

Biden said that he was “happy” that Trump and First Lady Melania Trump were apparently on the mend, but he said he was concerned about the president’s sunny message about the virus.

“I hope no one walks away with the message thinking that it is not a problem — it’s a serious problem,” Biden said, citing the more than 210,000 Americans who have been killed by the virus so far.

Addressing anti-maskers more generally, Biden exhorted them to listen to experts: “What is this macho thing, ‘I’m not going to wear a mask?’ What’s the deal here? … Does it hurt you? Be patriotic, for God’s sake.”

Biden did not criticize the doctors treating Trump, who have come under fire for not giving fuller details about the president’s health and for letting him leave the hospital so soon after displaying serious symptoms. The White House has medical facilities and a full team to care for the president.

“I’m happy it’s available to him,” Biden said of Trump’s care, adding that audience members do not have access to the same level of care Trump did, which included an experimental drug that has not been approved by federal regulators.

Biden also did not criticize the lack of complete detail given about Trump’s health.

“I can understand under certain circumstances relating to national security where every detail would not be made available” during a crisis, Biden said. “Sometimes for a president that [information] would come after the fact. I’m not being critical of the fact that every single detail” wasn’t released for Trump.

Biden said such details should be held back from the public “only on the margins and only in the moment.”

Responding to one questioner’s prompt about conservative Supreme Court nominee Amy Coney Barrett, Biden said that if the landmark abortion ruling Roe vs. Wade gets overturned, the “only response to that is pass legislation making Roe the law of the land. That’s what I would do.”

One questioner said she didn’t like how Trump “bullied” Biden during the debate, in which the president repeatedly interrupted Biden and the moderator and violated the debate’s ground rules.

Biden admitted that responding to Trump’s behavior was “very difficult” — during the debate, Biden called Trump a “clown” and told him to “shut up” — and said he “was trying to figure out how I could possibly have him respect the debate, respect the evening, respect the moderator … I did get frustrated.”

Biden cited his eight years as vice president dealing with world leaders such as Russian President Vladimir Putin as evidence that he could stand up to strong opponents, and he added that usually in international diplomacy he didn’t have “somebody screaming” from the podium next to his.

Biden criticized Trump’s response to a debate prompt to tell white supremacists to de-escalate, in which Trump told one right-wing group, the Proud Boys, to “stand back and stand by,” which Biden called “a clarion call to ‘get ready.’”

Trump has since said that he denounces the group and white supremacist groups.

Trump makes it hard for red states to battle the coronavirus