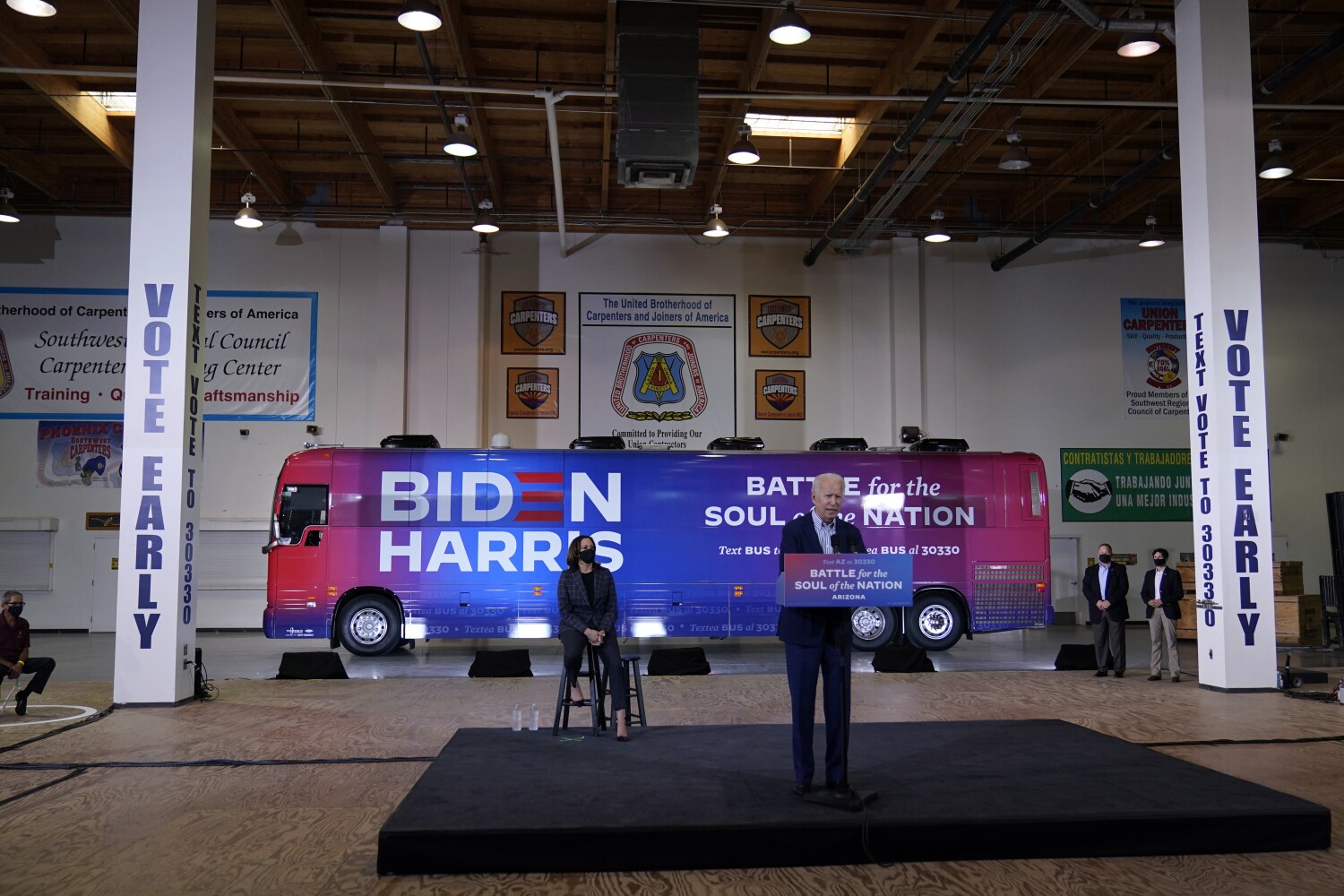 Democratic presidential nominee Joe Biden refused Thursday to say whether he supported increasing the size of the Supreme Court, staying mum on an idea gaining currency among Democrats who believe court vacancies have been unfairly filled by President Trump to solidify a conservative majority.

“They’ll know my opinion on court-packing when the election is over,” Biden told reporters in Phoenix, where he was campaigning with his running mate, Sen. Kamala Harris, the day after she debated Vice President Mike Pence, who also traveled to Arizona to campaign.

Before beginning his campaign swing, Biden told reporters he would not comment on the controversial court-expansion idea — dubbed “court-packing” mostly by its critics — because doing so would distract attention from his preferred focus on how the Senate was rushing action on Trump’s new Supreme Court nominee within weeks of election day.

“The moment I answer that question, the headline in every one of your papers will be about that other than focusing on what’s happening now,” he said. “This election has begun. There’s never been a court appointment once the election has begun.”

Biden, who served in the Senate for 36 years, has great respect for the institution’s traditions and has said in the past that he did not support expanding the court. But he has kept mum of late, in the emotional aftermath of the death of Justice Ruth Bader Ginsburg, and has not reiterated his opposition. Openly opposing the idea would risk angering his party’s left wing. During the Democratic primary campaign, Harris said she was open to the idea.

This month, both Biden and Harris sidestepped questions about the court proposal during their debates with Trump and Pence. Trump said the dodge proved Biden was intimidated by his party’s left.

The appearances of Biden, Harris and Pence on the same day in Arizona was a testament to the state’s political importance in 2020. Trump won the state in 2016 by more than 3 percentage points but is at risk of losing it this time. The Real Clear Politics average of recent polls finds Biden ahead by 3 percentage points. The state also features a Senate race — between GOP Sen. Martha McSally and her Democratic opponent, Mark Kelly — that is one of Democrats’ best shots at flipping a seat.

“It’s on, Arizona,” Pence told a group of a more than 300 supporters at a company in the Phoenix suburb of Peoria, Ariz., that makes body armor and riot gear for police and military personnel. “We are 26 days away from another great victory for the American people, and the road to victory runs right through Arizona.”

He said his debate with Harris illustrated that the Democratic ticket would turn the nation sharply to the left.

“Joe Biden’s nothing more than a Trojan horse for an extreme agenda,” Pence said.

With Trump sidelined by the coronavirus, Pence is the highest-profile spokesperson for the campaign for the moment. Pence said he spoke with Trump Thursday morning and expected to see the president hit the campaign trail soon. Trump’s doctor said Thursday that he could be cleared for public events as early as Saturday.

Biden and Harris’ first Arizona event was a meeting with Native American leaders, where the Democrats were joined by a prominent Republican ally, Cindy McCain, the widow of the state’s longtime GOP Sen. John McCain. Afterward, the running mates made a rare joint appearance before a labor group, then embarked on a bus tour of small businesses.

Earlier in the day, in a Fox Business radio interview, Trump was the most prominent of conservative critics who attacked Harris in openly sexist terms. Trump called her “this monster that was onstage with Mike Pence, who destroyed her last night, by the way.”

Asked about the attack, Harris refused to respond, saying, “I don’t comment on his childish remarks.”