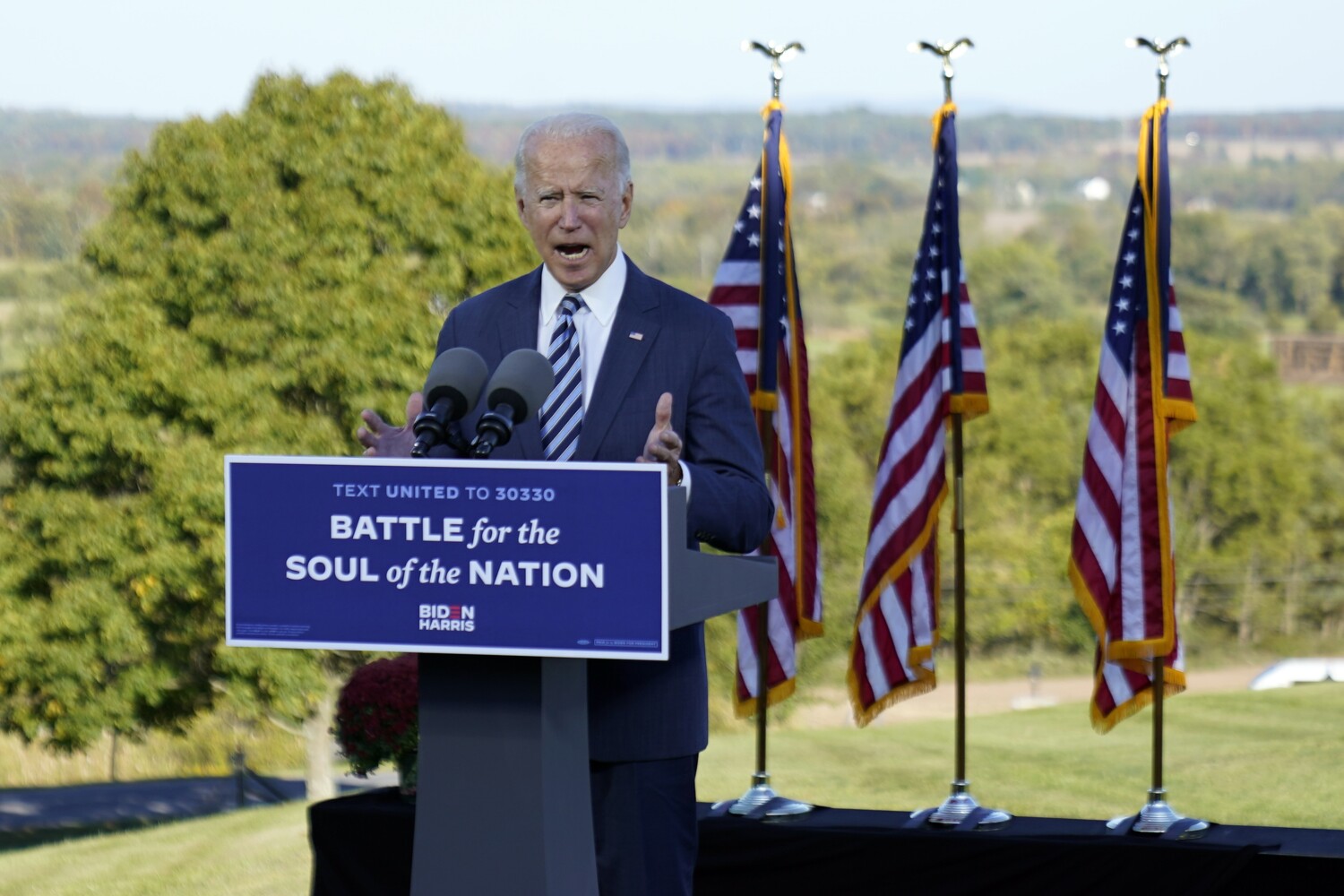 Joe Biden called Tuesday for an end to the divisions and partisanship that now define U.S. politics, traveling to the historic battlefield at Gettysburg, Pa., for a speech that did not mention President Trump and that likely sets the tone for the final four weeks of his presidential campaign.

Biden repeatedly urged Americans to set politics aside in the spirit of President Lincoln’s call for unity in his iconic Gettysburg address. It’s an implausible request in the most heated presidential campaign of the modern era, but it encapsulates the tone that Biden, enjoying his front-runner status in the race, wants to use as his closing argument to the nation’s voters.

“Today once again, we are a house divided,” he said, speaking against the backdrop of a sun-splashed rural landscape at the site of the bloodiest battle of the Civil War. “But that, my friends, can no longer be. We’re facing too many crises. We have too much work to do. We have too bright a future to have a shipwreck on the shores of hate and anger and division.”

“You don’t have to agree with me on everything — or even on most things — to see that what we’re experiencing today is neither good nor normal,” he added.

His 22-minute speech offered a stark contrast to Trump’s polarizing bravado, which has been undiminished by his illness with COVID-19. Within hours of returning from the hospital on Monday, Trump was sending partisan thunderbolts that dismissed the seriousness of the infection that has killed more than 210,000 Americans. On Tuesday, he abruptly ended negotiations with Congress over legislation to extend economic aid for victims of the pandemic and recession.

With its bipartisan appeal and above-the-fray tone, Biden’s speech clearly reflected the state of the presidential race in its closing month, with many voters already casting ballots by mail or through early voting. Biden exuded confidence at a time when polls show him leading by double-digit margins, both nationally and in battleground states like Pennsylvania, the site of the speech.

The polls indicate that Trump, who trailed Biden going into last week’s presidential debate, lost more ground in the aftermath of that encounter, in which the president repeatedly interrupted his challenger and got into quarrels with the event’s moderator, Chris Wallace of Fox News. His COVID-19 diagnosis does not appear to have brought Trump any sympathy bonus. Instead, some polls show further slippage for him since his hospitalization on Friday.

Biden’s speech — which he’d said earlier in the day he had spent a lot of time writing — set a high-road tone of the sort a front-runner can employ. With support of his party’s base secure, he could dispense with partisan rhetoric and instead make a pitch to attract moderates and disaffected Republicans who are weary of the drama of the Trump era.

He also sought to disarm one of the principal wedge issues that Republicans are trying to deploy against him — the argument that his sympathy for Black voters and approval of protests for racial justice signal a lack of support for law and order and the police.

“I do not believe we have to choose between law and order and racial justice in America,” he said, reiterating that he does not support the calls to defund police that have been embraced by many progressives.

“This nation is strong enough to both honestly face systemic racism and strong enough to provide safe streets for our families and small businesses that too often bear the brunt of this looting and burning,” he added.

Although he did not mention Trump, Biden dwelled on the white supremacists and hate groups that have gained prominence following the debate, in which the president invited one such group, the Proud Boys, to “stand by.”

Repeatedly calling on Americans to “put politics aside,” Biden said the COVID-19 pandemic and the recession are problems that cry out for bipartisan solutions.

“Wearing a mask is not a political statement; it is a scientific recommendation,” he said, a contrast to Trump’s decision to whip off his mask before cameras as he entered the White House after leaving the hospital Monday night.

“It is a virus,” Biden added. “It is not a political weapon.”

Biden’s appeals to bipartisanship could presage post-election conflicts with his party’s progressive wing, which is advocating moves such as expanding the size of the Supreme Court that would surely meet furious opposition from Republicans. And he acknowledged that many in his own party have called him “naive” for his faith in the possibility of building a working relationship between the parties.

“I’m told, ‘Maybe that’s the way things used to work, Joe, but they can’t work that way anymore,’” he said. “Well, I’m here to tell you they can. And they must if we’re going to get anything done. I’m running as a proud Democrat, but I will govern as an American president.”

The event also drew contrast with a speech that Trump made in Gettysburg in October 2016, as he seemed to be headed toward defeat by Hillary Clinton. In that speech, which also served as a closing argument of sorts, Trump laid out his populist themes and also talked about unity, but his remarks were notable for their divisiveness.

Trump declared that the election was rigged against him, that the media was corrupt and that he would sue the many women who had accused him of sexual misconduct — a threat he never followed up on.