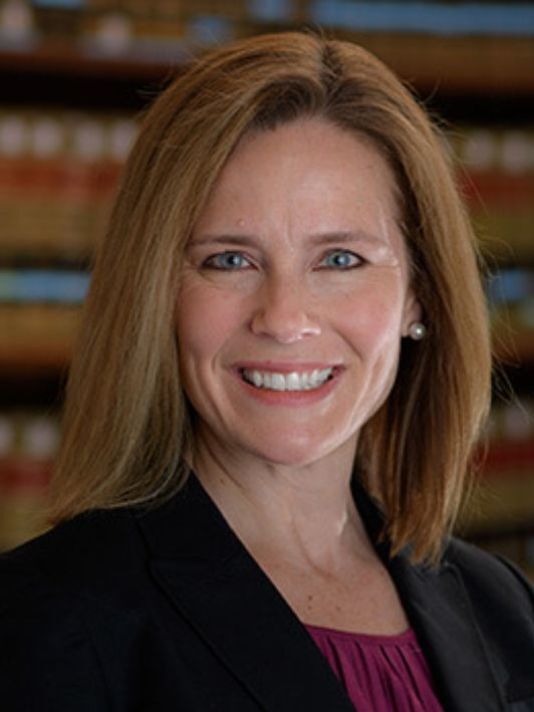 In his all but certain nomination of Judge Amy Coney Barrett, President Trump has chosen a well-regarded legal scholar who has strong appeal to conservatives and who almost surely would move the high court significantly to the right on abortion, guns and other high-profile issues.

If the Senate’s Republican majority holds to its plan to quickly elevate her to the Supreme Court, her confirmation to replace the late Justice Ruth Bader Ginsburg would mark the sharpest ideological shift in a new appointment in the more than three decades since Clarence Thomas, a 43-year old conservative, was narrowly confirmed to succeed liberal Justice Thurgood Marshall in 1991.

Barrett, 48, is a former Notre Dame Law professor and a favorite law clerk of the late Justice Antonin Scalia, who remains an icon in conservative legal circles, much like Ginsburg is regarded by liberals.

Barrett has a limited record as a judge with over three years on the U.S. 7th Circuit Court of Appeals in Chicago. But as a law professor, she wrote several lengthy articles on when justices should consider overturning long-standing precedents, including the Roe vs. Wade decision that granted the right to abortion.

Both sides in the decades-long fight over abortion believe she’s likely to provide the key vote to overturn or dramatically scale back nationwide abortion rights, giving conservative states the power to outlaw some or all abortions, as many did before the high court’s 1973 Roe ruling.

She has also indicated support for a broad view of gun rights under the 2nd Amendment, another area in which she could cement a majority to change the law.

As an appeals court judge, Barrett joined a dissent in 2018 when her colleagues struck down an Indiana law, signed by then-Gov. Mike Pence, that would have outlawed abortions that were based on the race, sex or disability of a fetus. The dissent, written by appeals court Judge Frank Easterbrook, referred to the Indiana statute as “an anti-eugenics law.”

Indiana took the case to the Supreme Court, which in May of 2019, after five months of internal debate, refused to hear the state’s appeal. The justices voted to uphold another less significant part of the law that required abortion clinics to bury or cremate fetal remains.

Although the Supreme Court has had a conservative majority for years, it has repeatedly disappointed antiabortion activists. In June, Chief Justice John G. Roberts Jr., who had been a steady foe of abortion, voted with the court’s four liberals, including Ginsburg, to strike down a Louisiana law regulating abortion clinics.

Roberts said he was constrained to follow precedent: The Louisiana law was identical to a Texas statute that had been struck down in 2016. Justices Samuel A. Alito Jr., Neil M. Gorsuch, Brett M. Kavanaugh and Thomas sharply dissented.

If Barrett joins them in the fall, the court will have at least five and possibly six justices who are inclined to give the states far more authority to restrict or even forbid abortion. And the issue is likely to be tested soon, since a dozen Republican-led states have recently passed measures that would ban some or nearly all abortions.

She has strongly indicated that she takes a less strict view of when to follow precedents, a legal principle known as stare decisis.

“Stare decisis is not a hard-and-fast rule in the Court’s constitutional cases,” Barrett wrote in a 2013 law review article, explaining: “I tend to agree with those who say that a justice’s duty is to the Constitution and that it is thus more legitimate for her to enforce her best understanding of the Constitution rather than a precedent she thinks clearly in conflict with it.”

The issue of precedent has become the focus of extraordinary attention in Supreme Court confirmations, largely because of the divide over abortion.

Thomas was asked repeatedly about Roe and abortion in his hearings. He said he had not had time to debate the issue. Eight months after joining the court, he voted in dissent to overturn the Roe ruling entirely.

When Roberts and Alito had their hearings, they told senators that Roe was a precedent that deserved respect. Gorsuch and Kavanaugh also described Roe as a “settled precedent” that had been reaffirmed in more recent cases, notably a 1992 case called Planned Parenthood vs. Casey. The court’s precedents should not be overturned lightly, they said.

Clues to Barrett’s views come not just from her articles, but also from a letter she signed in 2012 with other conservative academics that sharply criticized the Obama administration’s rule that required religious employers, acting through their insurers, to provide a full range of contraceptives to their female employees.

“Compelling religious people and institutions” to play a role in providing “abortion inducing drugs” is a “grave violation of religious freedom,” the letter said.

Abortion rights advocates said they were alarmed by her nomination.

“Judge Barrett’s record suggests that there isn’t a restriction on abortion that she doesn’t support,” said Leila Abolfazli, director of reproductive rights for the National Women’s Law Center.

By contrast, Helen M. Alvaré, a critic of abortion rights who teaches at the Antonin Scalia Law School at George Mason University in Arlington, Va., said Barrett had not spelled out her views on the right to abortion.

“But should she be skeptical of Roe and Casey, this simply puts her in the company of numerous male and female constitutional scholars who have concluded that the U.S. Constitution is silent on abortion, which is rather a subject for state law.”

“Self-described women’s groups should be ecstatic that, in the 21st Century, a woman who is highly accomplished both intellectually and in her family life, has made it all the way to the very top of a previously male-dominated arena,” Alvaré said.

On gun rights, Barrett could extend Scalia’s legacy. Last year, she dissented when the 7th Circuit, in a 2-1 ruling, upheld federal law and took away the gun rights of a Wisconsin resident who had pleaded guilty to defrauding Medicare.

“Legislatures have the power to prohibit dangerous people from possessing guns,” Barrett wrote in Kanter vs. Barr. “But that power extends only to people who are dangerous.”

“She apparently has a broader view of gun rights than even Justice Scalia,” he added, noting that in the court’s 2008 ruling in District of Columbia vs. Heller, which said the 2nd Amendment covered an individual’s right to own a gun, Scalia “explicitly said he was not casting doubt on felon-possession bans.”

For the last decade, the high court has refused to go beyond rulings in 2008 and 2010 that struck down citywide bans on handguns in Washington, D.C., and Chicago. The justices recently turned away challenges to state measures, including in California, that limit who can carry a concealed weapon or restrict the sale of rapid-fire rifles.

“With Barrett there will likely be five justices in favor of expanding 2nd Amendment protections,” Winkler said.

Democrats are also likely to argue that Barrett represents a threat to Obamacare and its insurance protections for tens of millions of Americans with preexisting medical conditions.

On Nov. 10, a week after the election, the high court is scheduled to hear a case brought by Texas’ Republican attorney general and supported by the Trump administration that seeks to strike down the entire law, including the protections for people with preexisting conditions.

The case is called California vs. Texas because, unlike most cases involving a federal law, California Atty. Gen. Xavier Becerra, not the Justice Department, is defending Obamacare.

It is not clear whether Barrett will participate if she is confirmed by then. But if the current justices were to split 4 to 4 on the outcome, they would probably hear a second round of arguments so Barrett could cast the deciding vote.

In her writings, she has been highly critical of Chief Justice Roberts for casting the key votes to preserve the law in 2012 and 2015 over fierce dissents by Scalia. Roberts “pushed the Affordable Care Act beyond its plausible meaning to save the statute,” she wrote in a 2017 article.

Barrett was born in New Orleans in 1972 and was raised in Metairie, the eldest of seven children. Her father was a lawyer for Shell Oil Co. She attended a Roman Catholic girls high school there and graduated from Rhodes College in Memphis, Tenn., a private liberal arts school affiliated with the Presbyterian Church. She then went to Notre Dame Law School, where she graduated first in her class in 1997.

She came to Washington to clerk for Judge Laurence Silberman on the D.C. Circuit and then for Justice Scalia during the 1998-99 Supreme Court term. She worked several years in Washington before returning to South Bend in 2002 to begin a teaching career at Notre Dame.

She and her husband, Jesse Barrett, a former prosecutor who is now in private practice, have seven children, including one with Down syndrome and two who were adopted from Haiti.

In Trump’s first year in office, she was nominated and confirmed to the 7th Circuit. Prior to the COVID-19 pandemic this year, she regularly commuted nearly two hours from South Bend to Chicago to hear cases.